Most seasoned Dubliners probably feel like they’ve seen all the city has to offer: all the lush parks and historic Georgian rows, every cobbled street, arching bridge and Victorian pub. The familiar can be taken for granted though.

So what if we told you about a new way of seeing the city? We’re not talking about a rickshaw or a longboard. Instead, we’re talking about kayaking – on the Liffey.

Getting ready for some Liffey kayaking

Dublin’s City Kayaking is based on North Wall Quay, where the city meets the Docklands. It’s on the same jetty as the Jeanie Johnston tall ship.

Jonathan, our guide, begins by outlining the route upstream and equipping us with waterproof jackets and life vests. We’re advised to change into shorts or leggings, as you’re bound to get at least a little bit wet. (It’s a good idea to bring a towel and some sun protection too.) We duly follow his advice and our group is ready to take to the water.

No experience is needed to use City Kayaking’s stable sit-on-top kayaks. They’re suitable for all fitness levels and there are some safety boats available to provide a tug if it’s ever needed.

You can go in tandem with a pal or solo. However, it’s probably a little easier, and a lot more enjoyable, in tandem. Experiences like this are better shared. City Kayaking has some triple kayaks available too.

A view from the water

For a start, it’s a great experience to paddle up to the underside of the Jeanie Johnston tall ship, taking in the details from a new angle and experiencing its vast size. It’s like walking up to the base of the Spire and gazing upwards.

We paddle out into the river and immediately get a sense of the busy streets on the Quays. Here, however, the tranquility of the water rocks you gently in your vessel.

You can paddle downstream to take a look at the gigantic harp that is Samuel Beckett Bridge, but we paddle upstream towards Guinness. Thankfully, it’s easy enough. City Kayaking makes sure that all its tours are at high tide, when there’s less of a current and you can glide across the water with relative ease.

The Custom House is the first major landmark on the tour. And its beautiful architecture is breathtaking when unobstructed by city traffic. 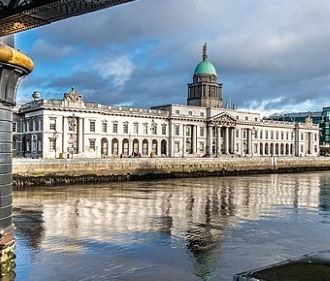 Paddling on, we come to Rosie Hackett Bridge, the Liffey’s newest crossing point and the most technologically advanced. Built to facilitate the southbound Luas and other public transport, it’s named after the inner city native who was involved in both the 1916 Rising and the trade union movement.

Next up is O’Connell Bridge – one of the busiest Dublin bridges. Watch out for the headstones on the centre arches. You won’t get as good a view from anywhere else. The head on the east side represents the Atlantic Ocean, while the western one depicts Anna Livia – the goddess of rebirth and renewal whose long flowing hair represents the river Liffey.

There’s something quite bizarre about finding yourself hidden beneath hundreds of passersby. The next 50 metres is tranquil, but you can spot the distant improvement works required to keep the city going.

Soon, we emerge from a clear stretch of water to the famous Ha’penny Bridge. Built in 1816, this is the skinniest of the Liffey’s bridges and was the only pedestrian bridge over the river until the Millennium Bridge was built beside it – 183 years later. As you pass, you’ll probably get gawped at by people on the boardwalk. 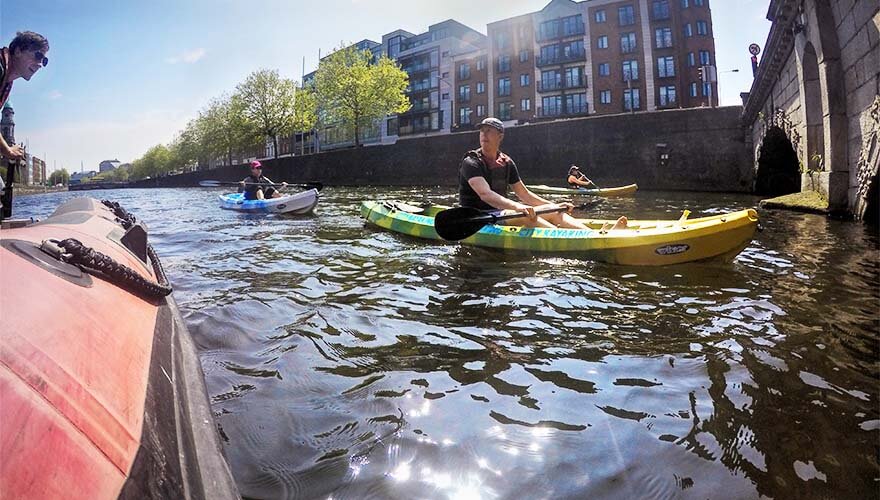 Jonathan, our guide, instructs us to keep into the southside of the river as a Liffey sightseeing tour boat passes by. Luckily, it causes only a small wake. Then, we make our way further west. We’re into the old heart of the city now. U2’s Clarence Hotel was once the old Custom House before it moved east.

Next up is Dublin’s seafoam green Grattan Bridge. Adorned with seahorses and lanterns, it was built way back in 1676 and led to the establishment of Capel Street.

Once you pass, don’t forget to look back at Sunlight Chambers. The exotic ceramics of this Florentine-inspired building is often overlooked by pedestrians. While you won’t be able to see much of its detailed ornamentation from the water, you’ll be able to appreciate how unusual it is compared to the rest of the city’s landscape.

We’re in the home stretch when we encounter the oldest city bridge at Queen Street. Built in 1768, Mellows Bridge is older than any of the bridges crossing the Thames in London. It is named after Liam Mellows, who was executed by firing squad for his part in Ireland’s bitter Civil War.

Finally, we reach Rory O’More bridge with its vibrant blue cast-iron. The smell of hops from Guinness marks our turning point back towards the Docklands. 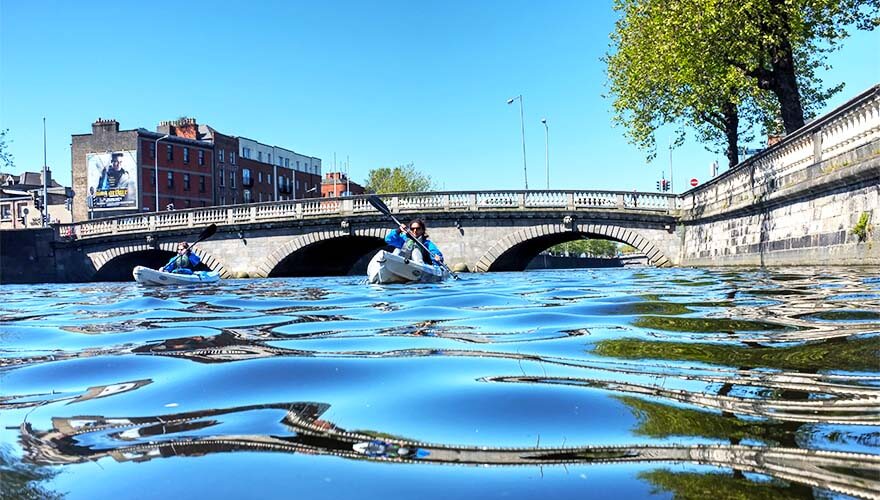 A selection of summer adventures

Jonathan tells us that City Kayaking now provides special tours with miniature concerts beneath some of the bridges. On Sunday and Wednesday evenings, when the bustle of the city has quietened, artists perform on stage boats along the Liffey.

Having passed under each of the bridges, we can only imagine what a unique experience that must be. The atmosphere is likely to be one-of-a-kind and, apparently, the acoustics are phenomenal.

Alternatively, you can join a tour guide for two hours of Liffey kayaking – just like Dublin.ie did. If you want to explore the river at your own pace, there’s also an option to simply rent a kayak and head out on the open water.

Back at base, we disembark, change into drier clothes and leave with a new appreciation for the city of Dublin. In total, we travelled around two-and-a-half kilometres along the Liffey – it took two hours but we’re left feeling energised.

Rain, hail or sunshine, City Kayaking is open throughout the summer months. Tours run from April to September.

For bookings, rates and availability, visit City Kayaking. Once you book, be sure to check out our guide to planning the perfect day out in Dublin’s Docklands.

Most of Dublin’s rivers, streams and watercourses have disappeared over hundreds of years as the city expanded. At one point, there were over 60 of them flowing entirely above ground. The Liffey, the Dodder, the Santry River and the Tolka are among the few to remain uncovered but where are the hidden ones today? Chief among Dublin’s hidden rivers is the Poddle, which runs underground for the majority of its course. For centuries it provided drinking water, powered our mills and even kept Dublin Castle safe from invasion. The Poddle, known as the Tymon over its initial overground stretch, rises in Tallaght and forms a lake in

It’s an addiction. It’s life threatening. It’s awesome. Huddling together in the bitter cold, on Friday the 13th, under a weak and feeble January sun, they all argue that there’s nothing better. Sure, there’s dramatic stories of nearly dying, but the group is adamant that the buzz is worth it. Great, they say, for the mental health. “It’s the perfect anti-depressant,” photographer Barry Delaney says. Listening to these Dublin swimmers, you hear the language of addiction, love and even religion. The perpetual appeal of Dublin’s Forty Foot Welcome to Sandycove’s famous Forty Foot and its crew of year-round swimmers.