Getting Around: Transport in Dublin

There are plenty of options for getting from A to B in Dublin. It is a fairly compact city, which means walking and cycling are viable options.

You can walk from many of the city’s outlying districts to its centre in around 30 or 40 minutes. But the public transport in Dublin is pretty good too. It’s one of the benefits that comes with living in the city.

Getting around Dublin by bus

Dublin Bus connects most parts of the city through a network of over 100 routes. Go-Ahead Ireland, Dublin’s newest bus company, operates more than 20 routes around the city too. Here is a handy map of key city centre bus routes.

Or, if you’re wondering how to reach the airport, you’ll find all the details in our guide on travelling to Dublin.

Dublin Bus services usually start at around 5.30am and end at 11.30pm. However, some 24 hour bus routes are being trialed and some Nite Link services are on offer too. You can download the Transport for Ireland app or check out the website to plan a journey or see real-time arrivals at your nearest stop.

It’s also worth noting that Bus Éireann and a variety of private coach services connect the city with the rest of the country. 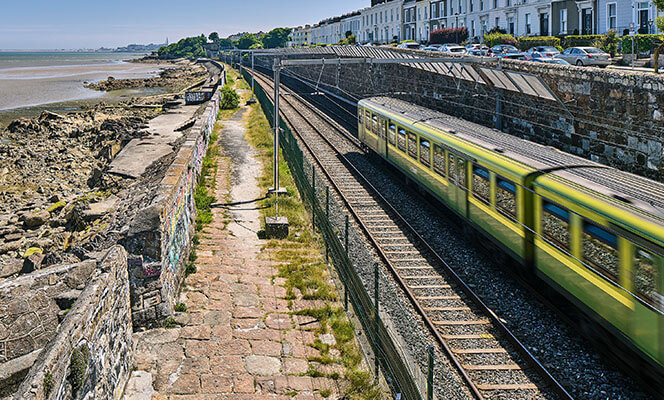 The DART is Dublin’s electric train system. It runs along the coast from Malahide and Howth in the north to Greystones in the south. On the way, it travels through the heart of Dublin passing above the congestion and traffic jams of the city centre.

At times, the passenger windows can offer scenic views of Dublin bay. But one of the biggest benefits of using the DART is that bicycles can be taken on board at off-peak travel times.

Trains run every 10 to 20 minutes from Monday to Saturday. Services start at around 6am and end at midnight. National and regional services run from Heuston Station, Connolly Station and Pearse Station in the city centre. For more route information, check out Irish Rail.

Getting around Dublin by tram

The Luas is the light rail system that connects Dublin’s suburbs to its core. There are two lines: the Green Line runs from Broombridge in the north to Brides Glen in the south and the Red Line runs from Saggart in the west to The Point in the east.

However, the last trams to certain stations are earlier, but during the festive season, they usually run later. It’s worth checking the timetables or real-time arrivals available through the app.

A Leap card is the best way to pay

The Leap card is the key to all of Dublin’s transport system. It’s the simplest and most cost-effective way to avail of Dublin’s public transport services and can be used on the train, tram, bus or to rent a Dublin Bike.

Leap card fares are up to 31% cheaper than single-purchase tickets. So if you commute to work each day via public transport, it can save you a lot. 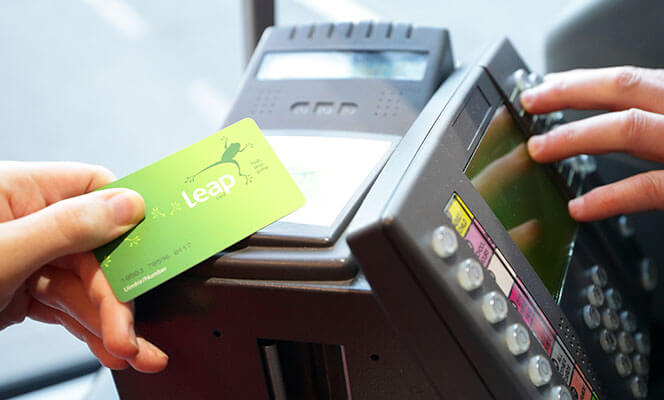 You can top up your card with the official app your phone, in a shop or at a public transport ticket machine. Alternatively, you can register for a monthly or annual ticket.

You can register for a card yourself or, if your employer makes use of the Tax-Saver scheme, you can register through your job to cut the cost of your commute even further.

The city’s bike-sharing scheme, Dublin Bikes, is an easy and affordable way to travel the city without worrying about purchasing or storing your own bike. These communal bikes are available at strategic spots throughout Dublin. They’re near Luas stops, office blocks, tourist attractions and universities. For a yearly subscription of €35, you can use any Dublin Bike as often as you like. The first 30 minutes are always free, after that, you’ll be charged based on the length of your journey. 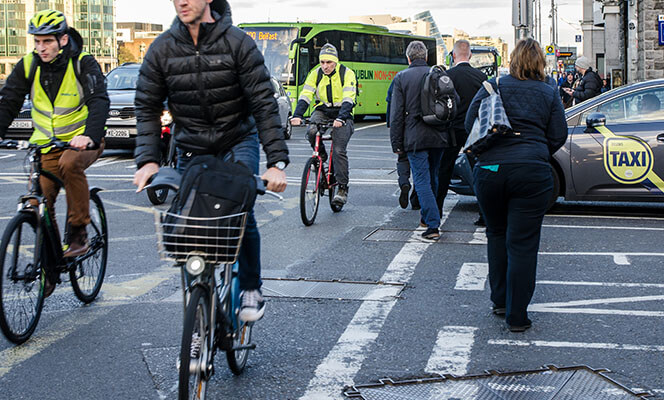 Bike theft can be a problem in the city, so this is a safe option. But if you have access to a secure lock-up facility or want to cycle well beyond the boundaries of Dublin city centre, check out the Bike to Work scheme. This Government initiative encourages people to cycle to work by covering the cost of their bike.

The number of dedicated cycling routes is on the rise, particularly in light of reduced public transport capacity due to COVID-19. Two of the more higher profile routes are along Dublin’s north and south quays, and from Blackrock to Sandycove on the southside.

If you need a lift quick, taxi apps like Lynk and Free Now are a handy option. You can also arrange a pick-up with your local taxi company over the phone. You’ll find taxi ranks dotted around the city too. But, if you see one in the street, you can always hail it down.

In Ireland, taxis can be any colour. But they all have an eye-catching yellow sign on their roof. If the light is on, it means they’re available to take a fare.

In Ireland, taxi services are highly regulated. Drivers need a special licence and insurance to operate and, for this reason, Uber doesn’t offer private car rides in the city.

So how much is a taxi in Dublin? This will depend on the length of the journey and the time of day – as well as some other factors. But you can use this handy taxi fare estimator to assess how much a journey will cost.

After 12 months in Ireland, you may have to get an Irish driving licence. If this is the case, you could be able to exchange your current licence. But some people will have to go through the full application process.

In Dublin city centre, rush-hour traffic can be a problem for commuters. And although there are some public car parks and on-street parking, you usually have to pay for it. 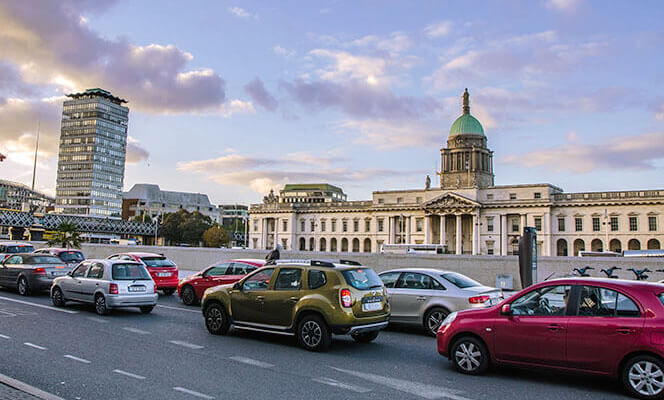 Car parks typically charge between €2 and €4 per hour, while on-street parking can vary from 60c to €3.20 per hour. It’s worth noting that many city centre streets only charge for parking between 7:00am and 7:00pm. After that, it’s free. Just make sure to check the street signage, as other streets require payment 24 hours a day.

If you want to hire a car in Dublin, all the usual options are available – both at the airport and in the city centre. GoCar, which allows you to hire a car or van by the hour, is also popular among Dubliners.

Getting on the road in Ireland is relatively straightforward. You will, of course, need a licence. The NDLS is responsible for issuing driving licences in the Republic of Ireland. If you’ve got a vehicle, you’ll need to make sure that it’s taxed and insured too. Do I need to get an Irish driver’s licence? For EU & EEA licence holders Drivers with an EU or EEA member state licence need never change to an Irish licence. If they wish to exchange their licence for an Irish one, they need to do it within 10 years of their driver’s licence expiring. For other licence holders