Although Ireland is an island nation, Dublin is closely connected to the rest of Europe by air and sea – and to the rest of the island by road and rail. Flights from Paris, Amsterdam, Brussels, Berlin and Luxembourg all take two hours or less. While flights coming to Dublin from UK locations like London, Liverpool and Edinburgh are even shorter.

Whether you plan to travel for business or pleasure, Dublin is a great base for your journeys. It’s just one of the many perks of living in the city.

Getting to Dublin by air

In 2019, Dublin Airport was one of the top 20 in Europe for connectivity. It’s unclear how the pandemic will impact its role as a travel hub in the long-term. But 46 airlines continue to connect the city to over 180 destinations in 40 countries across four continents.

For those travelling to Dublin from across the Atlantic, journey times start at around 7-and-a-half hours. Dublin Airport, along with Shannon Airport in the south of the country, offer US Pre-Clearance facilities. They are the only ones of their kind in Europe, making travel between Dublin and the USA particularly easy.

The airport, which is just north of the city, is easily accessible by road from the city centre. The journey takes around 20-35 minutes during off-peak hours. 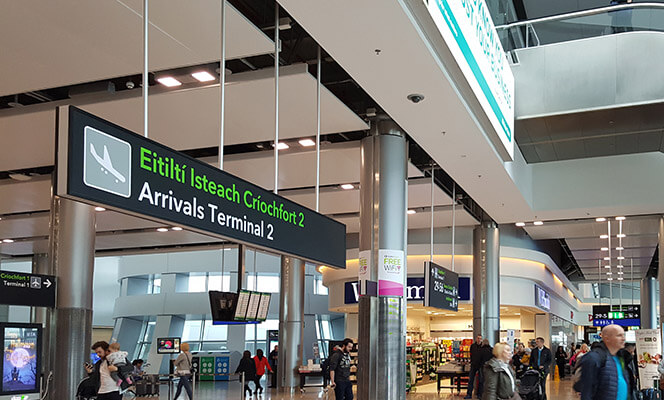 Aircoach is a private bus service which connects Dublin airport to the city centre, as well as other destinations around the country. Airlink is Dublin Bus’s airport service to the city centre. It also links up with various train and tram routes. A one-way ticket will cost around €7.

Regular Dublin Bus routes, like the 16 and the 41, also make their way out to Dublin Airport. Though they will take a little longer and won’t have luggage racks to accommodate your suitcases.

A taxi to the city centre will cost roughly €20-€30, depending on exactly where you want to go and what time you’re travelling. Many taxi companies around the city offer airport transfers for a fixed price.

Travelling to Dublin by ferry

Dublin is connected with England, Wales, France and the Isle of Man by regular boat routes. Travelling to Dublin by ferry will take longer than going by plane. However they offer a more relaxed experience and allow you to travel with your car.

For foot passengers and car drivers, both Irish Ferries and Stena Line offer regular trips to Dublin from Holyhead in Wales. Irish Ferries also sails between Dublin and France, while P&O connects Dublin with Liverpool. Steam Packet sails to the Isle of Man once a week too. 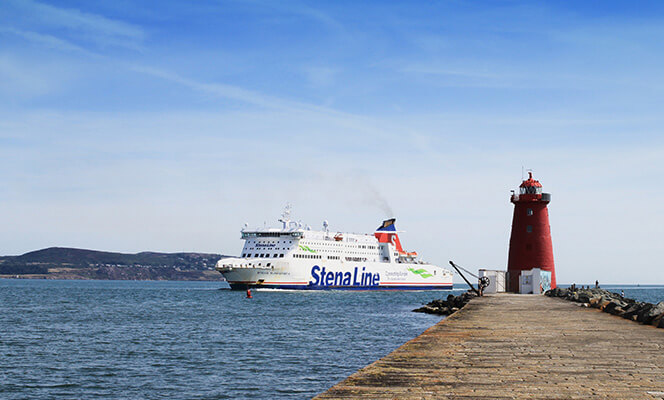 So how long does travelling to Dublin by ferry take? Well, coming from Holyhead, the trip can take as little as two-and-a-half hours, but a ferry from France will take around 18 hours to arrive in Dublin.

More routes and sailing times are available from Rosslare Harbour in Wexford, if you’re up for a two-and-a-half-hour drive or a three-hour train ride from Dublin.

Dublin Port is easy to get to too. Irish Ferries and Steam Packet in Terminal 1 are accessible by coach, while P&O Ferries in terminal 3 is a short walk from Dublin’s tramline.

The 53 bus route also serves Terminal 1 and 2 – the latter of which is home to Stena Line. Alternatively, a taxi to the city centre should cost less than €20. If you’re bringing your car, you’ll get there in no time at all.

If the idea of travelling to Dublin by ferry appeals to you, but you’re not near one of the connecting ports, you can take advantage of a SailRail ticket. This is a combined train and ferry ticket, which allows passengers to travel from any train station in the UK to one in Ireland. (The route from London through to Holyhead in Wales is particularly scenic.)

If you are travelling from another European country, the rail link between Paris and London offers a route to Holyhead, where the ferry will take you to Dublin. Alternatively, you could consider boarding a train to Cherbourg and then a ferry to Dublin.

Getting to Dublin from other parts of Ireland

Dublin is on Ireland’s east coast, but it also lies around the midpoint between the north and south. This means it is easily accessible from all over the country. So short weekend breaks are a viable option if you want to explore more of Ireland or get out of the city for a couple of days.

Rail is an excellent option for travelling between Dublin and other Irish towns. All the major cities are connected by fast and reliable trains run by Irish Rail. Train lines connect Dublin with Belfast, Sligo, Westport, Galway, Cork and Rosslare. You can view the full selection of routes here.

Ireland’s ongoing programme of motorway building has largely focused on the needs of people travelling to and from Dublin. This means that road travel is often the fastest way to move between counties. During off-peak hours, the journey between Cork and Dublin should only take around three hours, while a journey to Belfast would take around two. The AA’s handy route planner can help you figure out which way to go.

To help you navigate the city after you’ve arrived, check out our guide to transport links within Dublin.