A different kind of museum experience

No street in Dublin illuminates the history of the city quite like Henrietta Street. The vast houses on this cobblestone street have run the gamut from Georgian grandeur to tenement squalor within the 300 years of their existence.

Now, Number 14 Henrietta Street has been restored as a museum. It tells the story of the house’s journey from being the grand residence of a family of four in the 1720s to becoming home to over 100 people by 1911.

The research history and personal stories are also a huge part of the experience.

All the big events of Irish history buffeted the residents here. The Act of Union of 1801 moved Dublin’s parliament and its aristocracy away. Then, the Great Famine saw the poor move to the city in droves.

These are the giant history book moments so many of us already know. However, here at 14 Henrietta Street, the impact lies in the city’s smaller stories.

Even the smallest details have a story behind them

There is a nail just inside the front door of 14 Henrietta Street that was preserved throughout the decade-long restoration of the property, waiting patiently until the explanation for its existence came knocking one day.

Peter Branigan, who was born on Henrietta Street in 1939, came to visit the house and pointed at the nail. He told the restoration team that it was put there by his father to hang a Holy Family picture.

Branigan was one of 11 children who shared the room that is now the entrance hall of the museum. His family dug out the original picture and reunited it with the nail on the wall of the museum – where it still sits today. 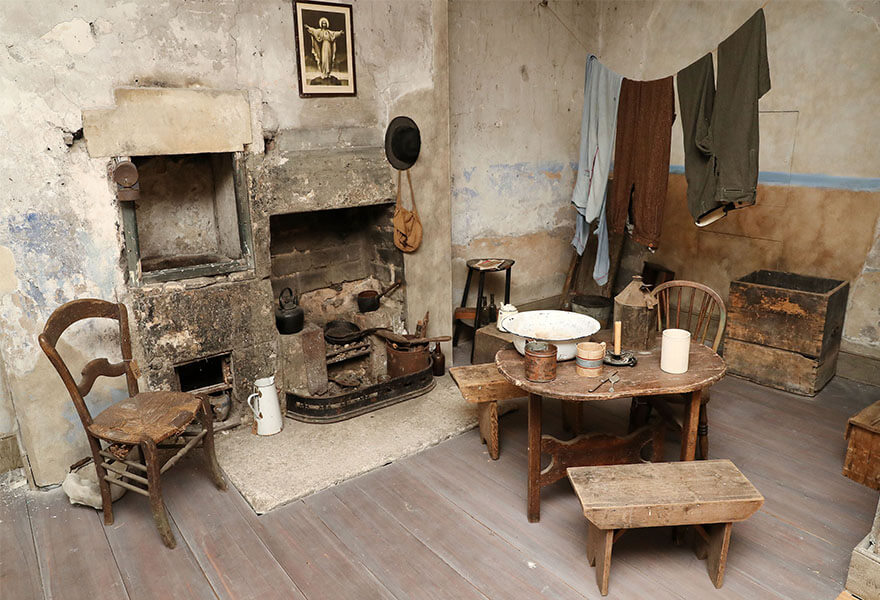 The restoration of old buildings like Number 14 can reveal the relationship between the people of the city and the spaces they occupy. It’s a process of choice – of what stays and what goes.

How do you uncover the layers of life in this building without erasing one era to showcase another? There were no frantic moves to fill in the gaps.

Instead, it was a slow uncovering – of remaining loyal to bits of wallpaper hidden behind bookcases, of slowly scraping away thick layers of paint to uncover Georgian stucco. It was leaving a nail in the wall until its story came in the door.

Stepping through time at 14 Henrietta Street

On a guided tour, we walk the grand rooms of the building’s first storey. Over the years, thousands of feet have made the wooden floors uneven.

In the mint green drawing room is the high ceilinged splendour of the house. This has been here ever since property developer Luke Gardiner first built Number 14 as part of the most fashionable street in Dublin.

When the aristocracy left, however, the house slowly became undone. In 1877, Thomas Vance pulled out the staircase and partitioned the space into 19 flats. 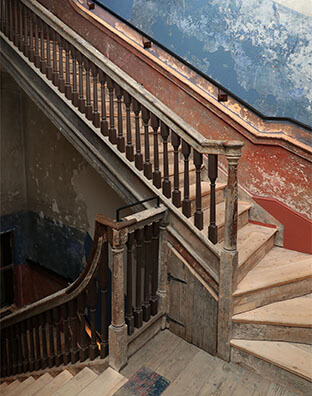 We step from the fine rooms out into the dimly lit hallway – and there is a murmur of recognition.

The walls here are painted in the Raddle Red and Reckitts Blue of the tenement era. Women once used the red on the walls as rouge for their cheeks.

We then head down the back stairs where the bannister was plundered for firewood in desperate times. There were 94 steps to climb with buckets and bedpans, because the building had no plumbing.

Another small story: The main front door of the building was always left open at night so anyone without a roof over their head could find shelter in the hallway.

Peter Branigan’s mother, when doing nightly prayers with her children, always told them to remember “the poor unfortunates on the stairs”.

Living memories of a bygone era

We descend through time to the dark of the basement. It’s a typically bleak tenement room with grey army coats as blankets on the beds – recreated from the famous 1913 John Cooke photographs.

At one time, a sixth of Dublin’s population lived in tenements like this. Disease was rampant; one family on the street lost 12 of their 14 children.

In another room, ghostly black and white footage of children playing in the street is projected on the walls — two women in our group sing along with the playground rhymes. 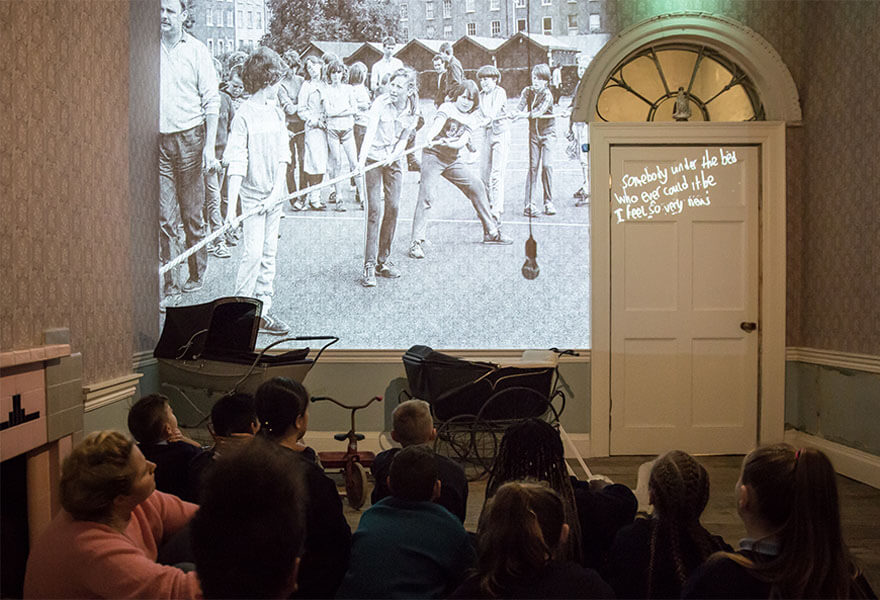 Tour guide Tracey Bardon was herself born in a tenement – as were her parents. She became involved with 14 Henrietta Street almost by accident.

She passed it almost daily on her way into town from her home on Constitution Hill and stepped in one day for a look. “I felt like I belonged in that house, it felt really homely,” she says.

People do get upset remembering a different life.

Enthralled by the restoration process, she embarked on a Culture and Heritage course in Dublinia. Now, she is the museum’s Engagement Coordinator. She delights in visitors’ memories of tenement times.

“They’re not always happy stories, but they make light of them,” she says. “Sometimes people do get upset remembering a different life.” However, she finds visitors are often keen to tell her that “just because you were in a tenement didn’t mean you were poor. There was always someone worse off.”

It’s much more than just a building

Tracey’s favourite part of the tour is the 1960s flat of Mrs Dowling – the last tenant of 14 Henrietta Street. It has been lovingly restored down to the lino on the floor.

Toy guns are slung on a bedpost, a clothes wringer sits in a hallway. Objects once commonplace are now museum treasure.

One of the older men on the tour group exclaims: “Aw, me mammy!” when we walk in. With the precision of the detail on show, some collective memory is triggered and people rush to those long lost objects that speak to their childhood.

At Number 14, the building itself is the artefact, but the residents’ stories whispered by guides in the stairwell are its lifeblood.

“We consider 50% of the museum collection to be the building itself, but the research history and personal stories are also a huge part of the experience,” says Iseult Byrne, chief executive of Dublin City Council’s Culture Company.

“A decision was made to keep as much as possible, which was almost harder than pulling it all out and starting again,” she explains. “However, this allowed the people who lived there to become an important part of the story; a story of the people we don’t usually see in museums.”

Plan a visit on the museum’s site or discover more in our guide to Dublin’s museums.