Down by the Secret Garden

On the south side, the secret garden was always the Iveagh Gardens. However,  music, comedy and food festivals have taken place there in recent years, meaning that the garden isn’t so secret anymore.

These days, to find the city’s true secret garden, you have to head north. Up O’Connell Street, then North Frederick, across Dorset Street and on up Blessington Street until you come to black wrought iron gates. In you go. And you’re there.

What to expect at Blessington Street Basin

The Blessington Street Basin is a perfect little gem of a walled park, with seats and walkways around the edges of what the locals call ‘the duck pond’. 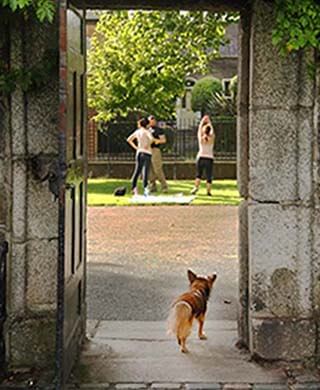 It is surrounded on all sides by quiet residential areas and the couple of old doors in the walls further enhance the secluded, magical feeling.

Those lucky enough to live on Geraldine Street and Primrose Avenue, which back onto the park, enjoy stunning views.

Originally constructed as the Royal George Reservoir in 1810, fed by the Royal Canal from Lough Owel, it continued to supply water to the north side of the city until around 1885.

Right up until the 1970s, the reservoir also provided water to two of the city’s best known distilleries – Jameson and Powers.

Dublin Corporation subsequently took over Blessington Street Basin and turned it into a public park – albeit one with a ‘private’ feel. The passing years were not kind to the park though. “The ravages of time and sporadic acts of vandalism have taken their toll on the former reservoir…” the Dublin Tribune reported in 1990.

“Much of the embankment along the water’s edge is subsiding. Iron railings are leaning dangerously close to the water… seating alongside the sides of the reservoir is regularly vandalised… a bricked up toilet provides an unattractive addition,” it said. 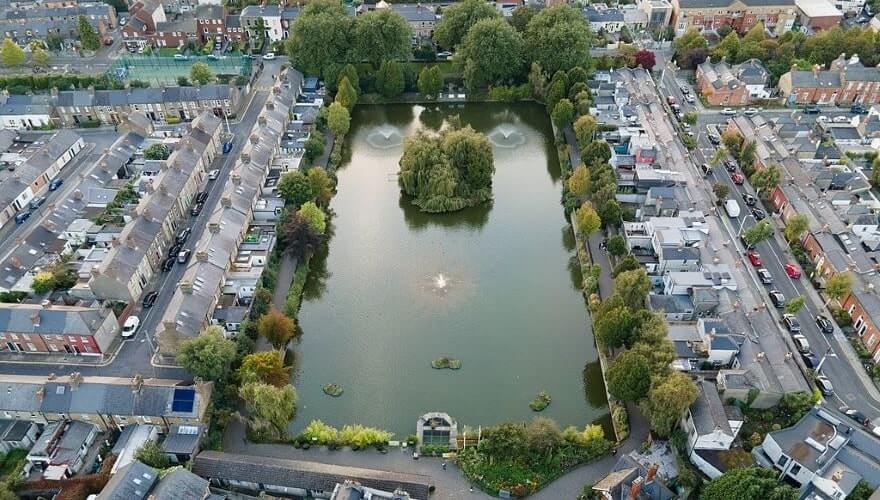 As Dublin hosted the European City of Culture in 1991, the Goethe-Institut paid for Dieter Magnus, a German “urban repair specialist”, to come up with a new design for the park. But, as Jerry Crowley tells us in his book Basin At The Broadstone, his design was met with resistance from locals who cooled on the idea of German generosity.

However, it did spur the local residents and businesses on to do a flurry of fundraising activity. With added funds from the Corporation, as well as work provided by FAS trainee schemes and corporate donations of materials, the renovations finally went ahead.

We all grew up feeding bread to the ducks.

President Mary Robinson and Lord Mayor John Gormley officially opened the Blessington Basin we see today in late 1994. The secret garden was back in business.

Today, it is home to a community garden, picnic benches, a games area and an outdoor gym. It even provides a home for the Phibsboro Amateur Boxing Club to train. Recently, a new farmers market has been taking place on the Royal Canal – just alongside the Basin – every Friday afternoon too.

A park where you could once wet your beak

Despite the park’s tranquil beauty it can attract some anti-social behaviour, Parks Manager Ed Bowden told Dublin.ie back in 2017. Sadly, he has since passed away.

“If people drink in a moderate way and stay quiet and don’t interfere with anybody, we kind of leave them alone because they’re everywhere and they’re part of the community too,” he said at the time.

Sitting in his office in the lovely period cottage just inside the gates of the park, he added: “But when they get rowdy it can be problematic.”

It seems there is nothing new about the problems presented by the demon drink. At least that’s what local historian Jerry Crowley tells us in his detailed book.

Back in the 1810s, the original occupant of the Tudor-era lodge was a man called William Ferguson. And despite the fact that the city then had some 2,000 alehouses, 1,200 brandy shops and 300 taverns for a population of just 170,000, Ferguson decided to augment his wage by opening a shebeen in the lodge. 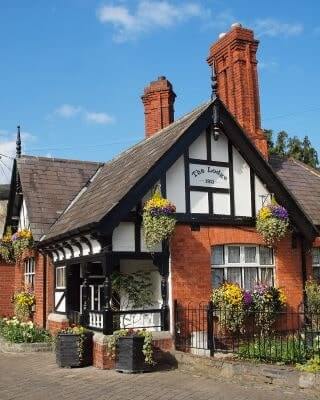 It wasn’t long, however, before he was busted – leading the corporation to introduce an ordinance specifying that “in future none of the Basin Keepers be allowed sell Porter, Ale or Spirits, at any of the city Basins, nor permit any person to do so, under pain of dismissal.”

Nowadays, the majority of people enjoy themselves without incident. The proposed opening of injection centres around the city may also help to reduce anti-social behaviour in the city’s parks.

We move on from the folly of man to discuss a more light-hearted subject. The folly of swans! It’s not only humans who create the odd chaotic scene in the park, Ed told us. The swans are guilty of it too. “Sometimes the swans don’t make very successful landings,” he explained.

Swans can only take off and land on water – and they need a long ‘runway’. Because of that they can often overshoot their landing spot.

“Neighbours will come running around saying there’s a swan caught in their garden or laneway,” Ed said. “Then we have to go out and capture it and rescue it and bring it back into the basin”.

There’s a bit of a bohemian feel to it.

A recent and charming addition to the park are the fairy zones. Although not fully visible right now with the lush summer vegetation, these are little areas with painted mushrooms, little houses, tiny parks with swings; basically a fairy wonderland.

There’s one zone beside the lodge and another at one of the corners of the basin. “That was Ciara Dowling. She did all the fairy doors and the house and all the other paraphernalia that came with it,” Ed said. “The kids love it and they want to come back to see it all the time. You can see the parents with them and the kids dragging them back.”

Speaking of the new additions, he added: “That sort of thing has changed the atmosphere in the park. We have noticed that people have been putting up chalk messages on the wall and love hearts. There’s a bit of a bohemian feel to it and that’s good. As long as it’s pleasant and in chalk, we don’t mind them writing on the walls.” 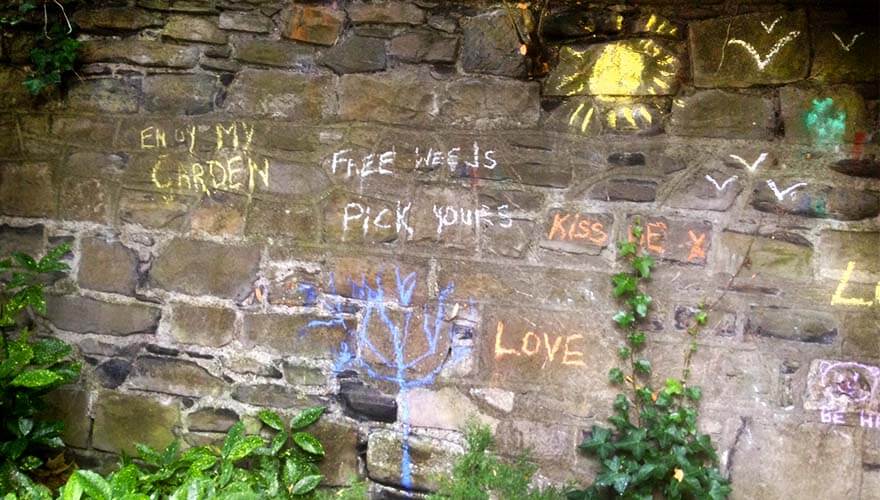 Chalk drawings on the park’s wall. Photo by Kevin Barrington

Ed’s favourite part of the job has been the planting of trees: “The one thing I do enjoy more than anything is planting trees and knowing that they are going to be there long after I am gone. I see trees I planted 15 years ago in Phibsboro and they are huge now”.

And despite the talk of anti-social behaviour, the vandalism of saplings that was so prevalent back in the 80s and early 90s seems to have become a thing of the past. While as much as a quarter of the park’s trees were once lost through vandalism, nowadays, that figure is less than 2%.

Ed put this progress down to things like nature tables in primary schools and school visits to the park. The next move is to get people to stop feeding the ducks and swans so much white bread. It’s really not good for them.

“Cabbage or lettuce, or whatever is going these days like rocket or bok choy, is much better for them,” Ed smiled. There are signs telling people what to feed the various birds. “But it’s a hard habit to break,” he said. “We all grew up feeding bread to the ducks.”

Blessington Street Basin’s opening hours change frequently throughout the year. While it opens at 10am all year round, it closes as early as 5pm in the winter and as late as 10pm in the summer. So be sure to check the opening times on Dublin City Council’s website before planning a trip there.

Discover more of Dublin’s beautiful outdoor amenities with our guide to the city’s parks and gardens.

A gang of lads. Shy, reserved, quiet. Just chewing the cud. Sure, every now and again, there is a bit of jostling. Just like you would expect from a group of healthy young males. However, there’s one thing you would not expect. And that’s the complete lack of interest in the women across the way. It’s almost like an old country ballroom. Men on one side. Women on the other. But come September, that will all change. Scents will be donned. Fights will be had. Women will be chased. Another generation will be born. So Park Ranger, Terry Moore, tells Dublin.ie as we cruise through a blustery Phoenix Park in his jeep.