The old Jameson whiskey distillery is a beautiful and historic building in the heart of Dublin.

It’s undergone numerous changes in its long life, the most recent of which has seen the building transformed into a spacious venue for distillery tours and events.

As the project manager at the Jameson Brand Home, Paula Reynolds played a central role in the redevelopment of the site. “We were lucky in that the people working with us on the renovation managed to keep about 90 per cent of the original structures intact.” She points to the glass flooring we’re walking on. “Through the glass here you can see the original foundations of the distillery.” She points to the rafters above us “and these are the original beams from when the distillery was first built.” 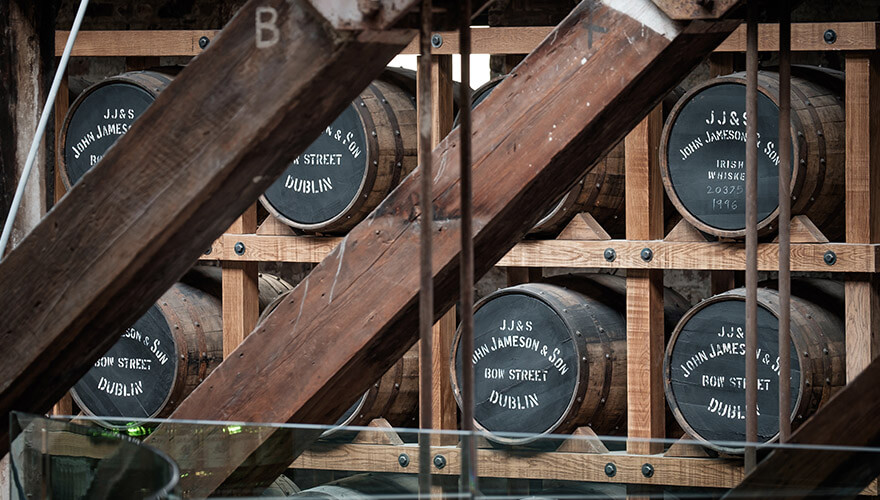 The distillery was originally built in 1780, and was one of only a few distilleries in Dublin. Uncertain times fell upon the Irish whiskey industry following prohibition in the United States from 1920 to 1933, followed by a trade war with Britain later in the 1930s. It was also during this period that, like so many large buildings in Dublin’s city centre, the distillery was used as a base for rebels during the fight for independence.

The decline of Irish whiskey helped Scotch and bourbon to become global favourites. In fact, by the middle of the twentieth century, Irish whiskey was almost dead in the water.

In an effort to survive these uncertain times, three of Dublin’s rival distillers joined forces. Jameson, Cork Distillers and John Power & Son came together to form Irish Distillers in 1966. Simon Fay of Irish Distillers has said that, given the diverse cultures of the three distilleries, this would have been an incredibly difficult transition, “Integration,” he said, “would have been quite brutal.”

Brutal, but effective. The distillery was one of the last to survive in Dublin, eventually closing its doors in 1971, when distilling operations moved to Midleton in Cork. For almost three decades the Bow Street distillery lay vacant, finally reopening in 1997 as a visitors’ centre. Jameson’s distillery in Midleton became the perfect location for perfecting the unique flavour of Irish whiskey, allowing it to carve out a niche for itself around the world as an alternative to Scotch and bourbon.

Since the reopening in the 90s, the Bow Street distillery has undergone three refurbishments. These have generally been completed to update the building and accommodate more visitors, of which there have been four million so far.

But it’s the latest refurbishment that is the most interesting. Bow Street is now the Jameson brand home with a maturation house. It remains very much true to the original structure; thankfully, most of the building survived the years of neglect.

Hundreds of artefacts, notebooks and distillery paraphernalia dating back to the time of John Jameson II have been unearthed at Midleton and brought to the Bow Street distillery. In fact, original distillery notes from the 1800s are being used to create whiskey in accordance with the precise directions of John Jameson II himself. “We have people working day and night in Midleton, going through all the notebooks they find down there,” Paula said. “In fact, there was one we found, which is on display here, that gave details of the specific barley that he used in the distilling of Jameson, and the notebook actually contained pieces of that barley. So we’ve been able to replicate the exact ingredients and distilling process.”

There’s also a giant old millstone that was used in the original distillery. The project team worked closely with conservation architects during the renovations in order to preserve as much of the old building as possible. And walking around, you see the fruits of that labour. You really get a sense of the old building, despite a number of newly installed features – and the fact that the original copper stills were sold off long ago. 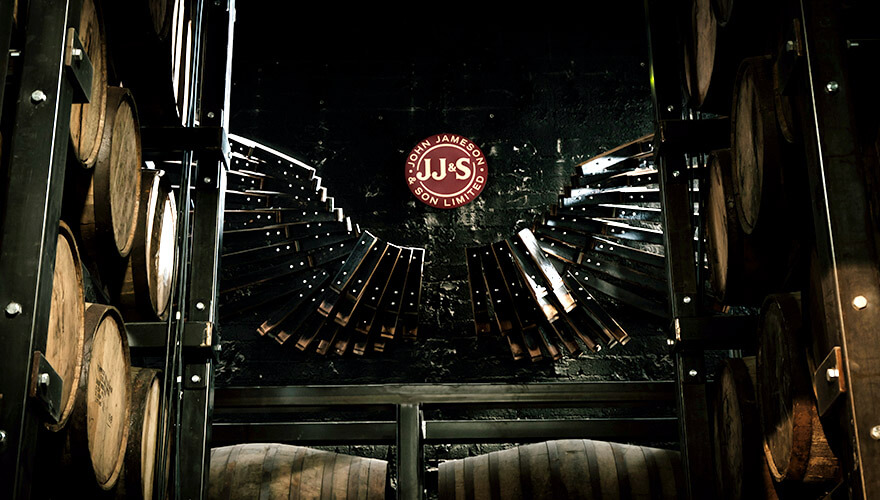 The brickwork throughout the building is beautiful, much of it dating back to 1780. The maturation room has an almost spiritual atmosphere. Here, stacks of barrels line the walls and rest for years to develop the desired taste. There are 84 bourbon barrels and six sherry barrels when we visit. It’s a dark room, and the smells from the barrels hit your nose the moment you walk in. Upon the wall hang a set of wings fashioned from old whiskey barrels. “They’re the angel wings,” Paula tells me. “There’s a loss of 2% of the content each year during the distilling process. We triple-distil, which gives that smoother taste than other whiskeys. We call that loss the angel’s share.”

It’s a beautiful space, filled with a lot of artefacts, and the room has been preserved really well

In a secretive room behind the maturation house lies a beautiful old desk, equipped with an ancient typewriter and an original leather-bound notebook of John Jameson; his handwriting was very elegant. They call this part of the distillery JJ’s Office. “We’re not entirely sure what we’ll do with this section,” Paula says. “It’s a beautiful space, filled with a lot of artefacts, and the room has been preserved really well.” She suggests it may be used for private, small functions. But as of yet, it is a room of secrecy and beauty.

The distillery will now host whiskey tastings and mixology classes, as well as interactive tours. More and more original artefacts are being discovered in Midleton and brought up to Bow Street for display, making it a museum as much as a distillery. The excellently preserved and tastefully renovated building is a site of real interest to anyone intrigued by whiskey, as well as one of historical relevance in Dublin’s ongoing narrative.

Patrick Murtagh
Patrick studied English, Media and Cultural Studies and now works as a freelance journalist. He writes about social and cultural issues, football and a bit of technology, as well as some fiction. He's confused by the world but finds solace in the smooth rhythms of Marvin Gaye.
Update Cookie Preferences
Copy link
CopyCopied