By the banks of the River Dodder, the mighty Aviva Stadium rises up from the surrounding red brick terraces of Beggars Bush. This is the home of Irish rugby.

Today, the Aviva Stadium is home to the Irish Rugby Football Union – the body that manages rugby union in both the Republic of Ireland and Northern Ireland. 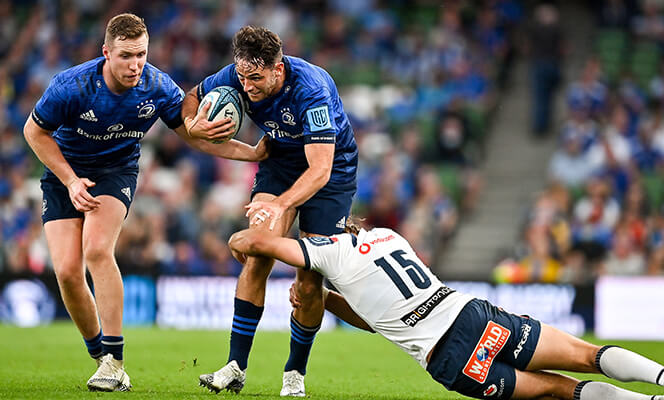 Hugo Keenan of Leinster is tackled at Aviva Stadium in Dublin

Almost 200,000 people across the country are registered rugby players. This figure includes players at every level – from local clubs and school teams, right up to inter-county competitors and national teams.

Hundreds of small clubs play rugby across Ireland – and they’re all welcoming of new members. These teams cater to local men and women who love the game, children who aspire to play internationally and players with disabilities. If you want to join a Dublin rugby club, you’ll find one near you on this handy map.

Dublin has around 30 clubs to choose from and they all compete in the Leinster Rugby competition.

You’ll notice that there’s a cluster of clubs around south Dublin. Rugby is particularly popular in this privileged area of the city and is a feature of the private school system in Dublin. Every year round 20 boys’ schools compete for the Leinster Schools Cup – almost all of the participants are private fee-paying schools.

There are four provincial rugby teams on the island of Ireland – Leinster, Munster, Ulster and Connacht. They compete among themselves and with similar sized teams from the UK and Europe. Leinster plays its home games in Dublin’s RDS Arena in Ballsbridge or in the aforementioned Aviva Stadium. 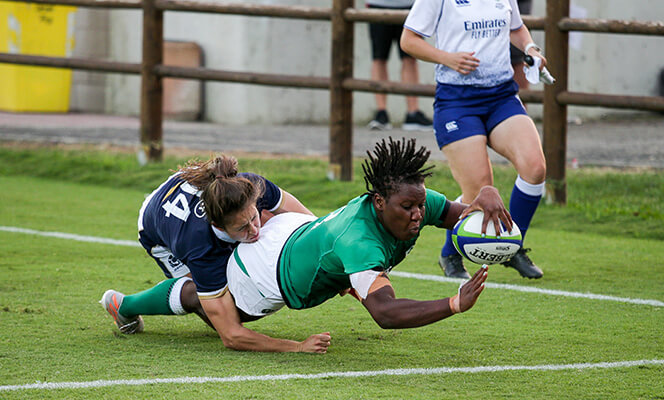 Linda Djougang of Ireland scores a try against Scotland

Most Dubliners follow Gaelic games and football more avidly than rugby. But everyone seems to have an opinion on international games.

After crushing the New Zealand All-Blacks at an iconic match in November 2018, the senior men’s team cemented its place as the world’s second-best team. The following year, they wrested the top spot from New Zealand for the first time ever.

This victory was short-lived, but it generated huge interest in the sport and attracted many new Irish fans. Currently, Ireland’s men’s team is fourth in the World Rugby Rankings, while the national women’s team places eighth.

If rugby isn’t your thing, you can find out about other popular sports in Dublin here.