Dublin has office spaces suitable for fledgling startups right through to international corporations. From bijou to the very big, from new builds to colourful Georgian conversions, it’s all on offer in the city.

Whatever your needs, you’ll be able to find the perfect base for your business. It doesn’t matter whether you’re looking for a 55m² retail unit or a 12,000m² office space. Available locations include city-centre high-rises in the city’s Central Business District and leafy suburban office parks.

Thanks to ongoing development, Dublin’s property inventory is growing fast. At the start of 2019, for example, 30 office schemes were under construction in Dublin city centre. Between them, they added more than 370,000 square metres to the market.

So if your business is thinking about investing in Dublin, you won’t have a problem finding suitable office space. Here’s some useful information if you’re considering setting up shop in the city.

Office parks in greater Dublin include:

Before the onset of the Covid-19 pandemic, Dublin’s commercial space market had matured and office rents in Dublin city centre had stabilised at around €60 to €65 per square foot. At least that’s what commercial property firm HWBC said at the time.

During national lockdowns, as office workers moved to work from home, office rents generally decreased. But as of 2021, prime office rents in Dublin city centre remain stable at €630 per square metre – or just under €59 per square foot.

Right now, this is how office rents in Dublin stand:

However, it’s worth noting that office rent in Dublin’s north and west suburbs actually increased slightly during the pandemic. While office costs in the south of the county decreased slightly.

Pre-pandemic, HWBC forecast that the suburban market could potentially peak at around €35 per square feet at office park locations like Sandyford and Central Park. While the market’s future is somewhat unclear, this insight will provide investors with an estimate of maximum costs should the sector return to pre-pandemic levels of demand. 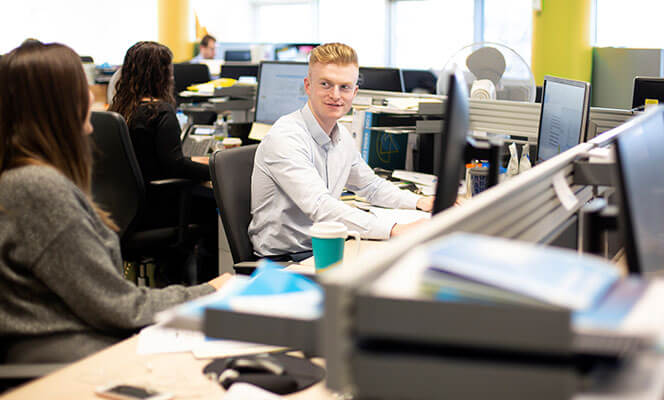 For those seeking a sense of community in their workplace, the number of coworking spaces in Dublin has grown over the last number of years. They usually offer both private offices and shared spaces.

Some global names like WeWork are in the Irish market, while home-grown companies like Iconic Offices have also set up central locations across the city.

There’s also some spaces carved out specifically for tech companies and startups. The likes of the Digital Hub and Dogpatch Labs create an innovative ecosystem of startups and established tech companies.

For startups, Dublin also boasts several progressive incubators and accelerators. They can help new businesses nurture and accelerate their growth, establishing their presence on the world stage. The Guinness Enterprise Centre and NovaUCD are just two examples.

How do I find an office in Dublin?

There are a number of commercial estate and letting agents in the city that can help you to find the right space for your business. These include:

Ireland is one of the easiest countries in Europe in which to start a business. If you require a visa to live here, there’s even special programmes to speed up the process for entrepreneurs. If you’re seriously considering bringing an investment to Dublin, here’s an overview of all the legal matters you’ll need to know about. Regulation Irish regulators, across different sectors, have a strong reputation for excellence. These include: The Central Bank of Ireland, which is the regulator of all financial services firms in Ireland The Health Products Regulatory

While Dublin’s vibrant culture, skilled workforce and business-friendly environment all play a role in attracting investment, it’s no secret that many firms base their operations here to take advantage of the favourable tax incentives provided by the state. Corporation tax in Ireland is among the lowest in the world. But there’s also plenty of tax reliefs and incentives for those who invest in research and innovation. From a more practical point of

There is an extensive range of state supports available to companies that base themselves in Dublin. It's one of the many reasons investment in the city is so strong. The support and financial grants available will depend on your company's size, sector and plans for R&D.