A gang of lads. Shy, reserved, quiet. Just chewing the cud. Sure, every now and again, there is a bit of jostling. Just like you would expect from a group of healthy young males. However, there’s one thing you would not expect. And that’s the complete lack of interest in the women across the way.

It’s almost like an old country ballroom. Men on one side. Women on the other. But come September, that will all change. Scents will be donned. Fights will be had. Women will be chased. Another generation will be born.

So Park Ranger, Terry Moore, tells Dublin.ie as we cruise through a blustery Phoenix Park in his jeep. 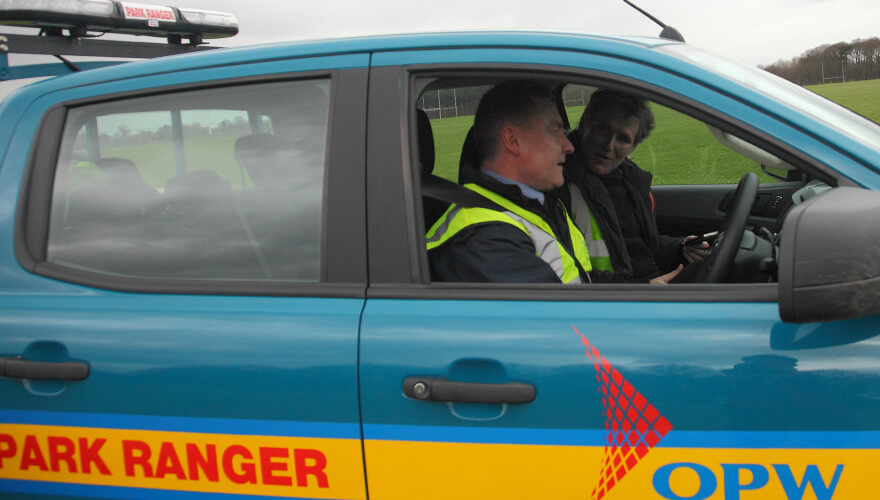 Bringing the deer to Dublin

Terry himself has been working here for more than 15 years. He loves his job.

“No complaints,” he says. “It’s good to work outdoors. You meet all sorts of people. All walks of life. You see the seasons change. I tell you, I’ve done a lot worse.”

As we pull up alongside a gang of young bucks, Terry says he particularly enjoys one aspect of the job. In addition to his normal ranger duties, he’s been the park’s deer keeper for the past decade.

Terry fills me in on the history of the fallow deer we see roaming the Phoenix Park. Like St. Patrick, the deer were shipped over from Wales. In 1662, the Duke of Ormonde brought them over to set up a royal deer hunting park.

The red deer you find in Munster, around Killarney, are indigenous. Around Wicklow and Kerry, there’s Japanese Sika introduced by another aristocrat – Lord Powerscourt. While the Phoenix Park deer are common fallow deer.

While they aren’t reindeer, a visit to the park is a Christmas tradition for many Dublin families. After the President, who lives in Áras an Uachtaráin just off Chesterfield Avenue, the deer are the most beloved residents of the Phoenix Park.

In addition to animals, various lords introduced new plant species to Ireland – some of which have become invasive. The rhododendron situation in Killarney National Park is a particularly prominent example that has been causing problems recemtly.

Rutting season at the Phoenix Park

Sounding a bit like West Side Story, Terry tells me of the two gangs: “The bucks occupy the east side of the park and the does occupy the west side.” And it sure sounds like it’s a buck’s life.

“The bucks move in around September for the rut, the mating season. So they show up once a year and then depart, and the female is left to do all the work.”

So what do the stags do all day?

“They just hang out – sleeping and eating. They have a three-chambered stomach. So like cattle, they chew the cud. They graze, sit down and regurgitate what they have eaten,” Terry says. 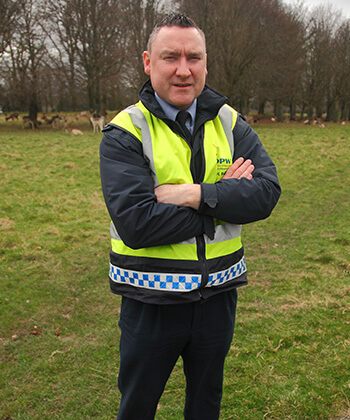 And while there’s a bit of antler sparring going on in front of us, Terry says that’s pretty much in jest.
Things get more like late night Temple Bar during the rut.

“During the mating season, you’ll see them clash antlers with all the power and might that they have,” he says. “It’s fairly explosive and some of the battles can last for up to 20 minutes. All just to establish dominance, to show who is the alpha male.”

And like some of their human counterparts, the female will go for the alpha male if she wants to spread on the best genes.

While the human stag parties seem to favour venturing out in their shirt sleeves, the young bucks in the park will start to change into their winter coats. However, it would seem both human and animal share a common love for overpowering scents.

“The bucks secrete a lot of wax and they urinate in the ground in holes, trying to get themselves as smelly as possible to attract the females. It’s their natural pheromone, their own musky scent. Just like the lads’ aftershave,” Terry says.

Then the females get pregnant. “They are pregnant for eight and a half months. Then all the fawns will be born and then the whole process will start all over again. Just like it has been for 355 years,” he adds.

While this is no longer a hunting park, given the fecundity of the deer and the absence of natural predators, culling is necessary.

“If you have 100 does, you will have 80 or 90 fawns the next year. So culling is the only way we can manage them efficiently,” Terry says, adding that he has firearm training. The culling is generally in the order of 15% of the total population.

And what happens to all that steak-like venison? “They all go to a game dealer. And back into the food chain,” Terry says. “It’s low in cholesterol, low in fat, high in protein. And of course it’s all organic,” he adds.

The meat sells for around €2 a kilogram and a mature fallow buck could weigh up to 100. So there’s a fair bit of money to be made. Yet, Terry says that poaching is not a problem – partly because there are so many people around.

With that, the rain comes lashing down. So we leave the deer to happily idle the day away.

So where are the deer in Phoenix Park?

Although the park is home to around 500 deer, it’s not always easy to find them. That’s because they have the freedom to roam the 1,752 acre grounds.

A good starting point is to head along Chesterfield Avenue – the main road that cuts through the park. Keep an eye out for deer in the wooded area near the cricket pitches. Or head right to the heart of the park. The open field overlooked by the white Papal Cross is a regular hang out for the herd.

There is some parking available along the main road. Alternatively, you can rent a bike near the main entrance.

However, if you find the location of the deer, it’s important to remember they’re wild animals. So keep a distance of at least 50 metres and make sure dogs are on a lead – especially during the rutting season in autumn and fawning in the summer.

Terry says visitors to the park should never feed the deer. The majority of their diet is grass and they find other treats, like leaves and seeds, throughout the park too. Eating other food can prove detrimental to their health.

For more information on all the park’s amenities, check out our guide to Dublin’s parks or head directly to the Phoenix Park website.

Hiking for women who want to connect with nature We caught up with Melissa McDermott – Galz Gone Wild founder – and Ruth Farrell to find out about the group of women who escape the city to find some scenic hush in the Wicklow mountains. Creating a supportive community of women Mel founded Galz Gone Wild in 2017 after moving home from London. She found herself lacking direction, and she was unsure of her next step. She started to hike to clear her head, but the hiking communities she found were mostly male and older. They were hiking for different reasons. “There is a community there, but it’s very much about getting from point A to point B, as quick

Much more than a castle Set on 260 acres of parkland in the seaside town of Malahide, 16 km north of Dublin, Malahide Castle was home to the Talbot family from 1185 to 1975. The atmospheric castle – yes, there are ghosts – is furnished with period furniture and a large collection of Irish portraiture on loan from the National Gallery. There are also gardens, playgrounds, a one-of-a-kind butterfly house and a fairy trail. Ireland’s only model railway museum is just a few minu