Set on 260 acres of parkland in the seaside town of Malahide, 16 km north of Dublin, Malahide Castle was home to the Talbot family from 1185 to 1975. The atmospheric castle – yes, there are ghosts – is furnished with period furniture and a large collection of Irish portraiture on loan from the National Gallery. Four main rooms are open to the public: the wood-panelled Oak room, the Small and Great Drawing Rooms and the Great Hall, where an exhibition records the history of the family who lived at the castle for almost 800 years. 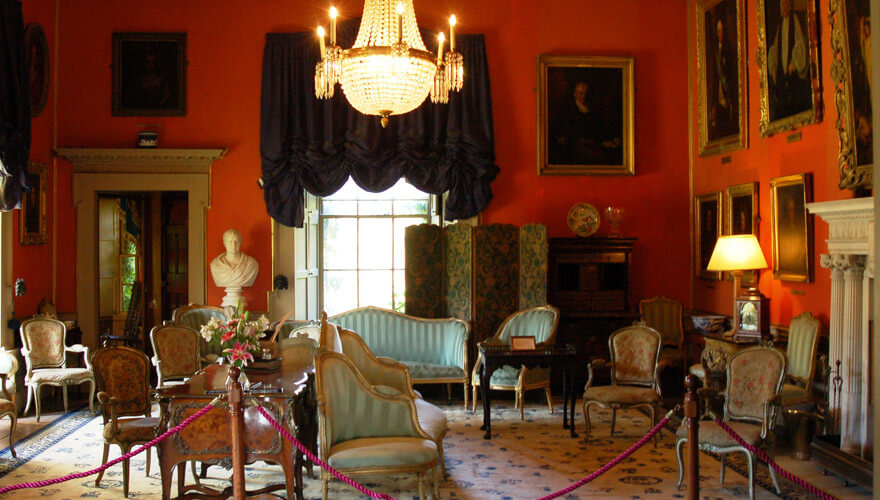 Outside there is a splendid series of glasshouses, a conservatory and several very regal peacocks as well as some beautiful gardens to explore. In the courtyard, another exhibition presents the story of these gardens, largely the creation of Milo Talbot, the last Lord Talbot to live at the castle.

Milo Talbot was a world-renowned gardener and an expert botanist. But he was also a British diplomat and a one-time head of security for the Foreign Office. He died in mysterious circumstances while on a Greek cruise in 1973. The friend he was holidaying with was never interviewed, there was no post-mortem and his sister Rose burned his personal papers.

While at Cambridge in the 1930s Milo was a friend of the infamous Soviet spies Kim Philby and Anthony Blunt. One member of the family, Stephen Talbot, believes that he may in fact have been murdered, possibly by MI6.

The castle and estate were sold by Rose in 1976 to Fingal County Council, partly at least in order to pay Milo’s death duties. Unfortunately, however, much of the contents had already been sold – some of them to Mick Jagger, who bought several pieces of fine Irish Chippendale furniture for his chateau in France. 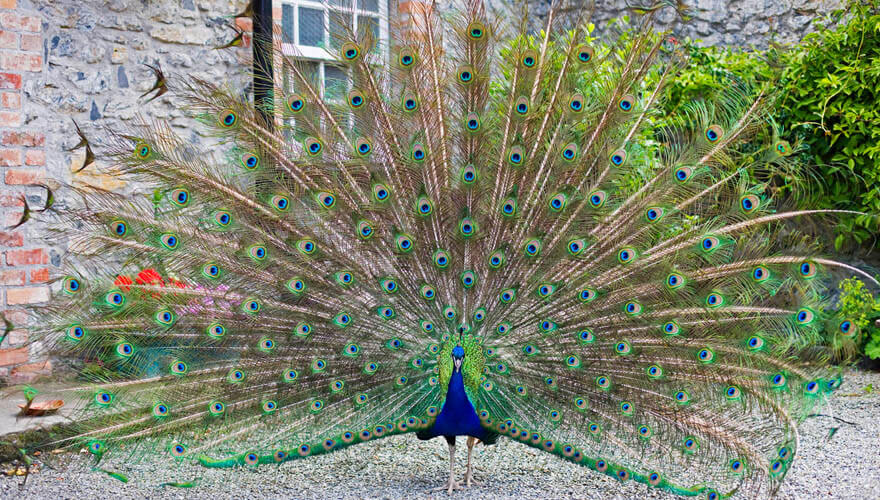 One of the peacocks at Malahide Castle

Dublin.ie talked to Nicola Talbot and her brother Stephen (author of an authoritative Talbot family history) about Milo and the castle.

Dublin.ie: Has there been any official reaction to connections your book suggests might have existed between Lord Milo and the Cambridge spy ring?
ST: I don’t expect any official reaction. The general perception of the Cambridge Spy Ring is that it was limited to five men. But a quick delve into wider Western-Soviet espionage history quickly exposes that Soviet infiltration was much broader and deeper than this with some agents on a regular payroll and other sources blackmailed or bribed if ideological reasons weren’t enough. Many wouldn’t even have been aware of fellow agents they worked alongside. As to Milo’s role, I’ll leave it to others to dig further if they wish. There may well be documents on file but I doubt they’ll be released anytime soon.

Dublin.ie: You both live in England now. Do the family maintain any links with Malahide or Dublin?
ST: We hold no property in Ireland anymore but we do make occasional visits. Given the help I received with my research from local residents I’m always keen to say my hellos when I’m over. One of my brothers went recently with his wife, although he chose to remain anonymous on his tour of the castle.

Dublin.ie: How are you related to the current Lord Talbot?
ST: John, 10th Lord Talbot sadly died on 21st November, 2016. He was our father’s first cousin and has been succeeded by his son, our second cousin, Richard. John and his brother Edward were very helpful in the course of my research for the book I wrote about the family.
NT: Take care not to confuse this Richard with our eldest brother who’s also called Richard and has a farm in a place in Tasmania that’s also called Malahide. We have so many duplicate names in the family, it can get very confusing!

Dublin.ie: Has the current Lord Talbot ever been to Malahide, to your knowledge?
ST: John certainly had, I can’t imagine Richard has had time since he’s inherited the title.

Dublin.ie: Have you yourself spent any time in Malahide?
ST: I first came over in 1997 and have had many visits since, both during the course of my research for my book and after its publication. The launch was in Malahide – I love my visits there!
NT: I visited the castle when I went over for the memorial service of Rose Talbot, Milo’s sister. I was born in 1970, so I was only a child when Milo died and the castle was sold. I had heard about the castle back then, but I had to make do with a child’s imagination of what it must be like! As a budding writer with a love of adventure stories, it was fascinating to hear about such things, especially as I was living in a rather mundane modern end-of-terrace house. I’m glad that the castle is open to the public to view rather than having been privately bought and closed off or turned into a housing estate or whatever. There’s so much history attached to the place and the gardens are beautiful. It’s sad that some of the contents were sold to private collections, but it’s still a lovely place to visit and I really hope people enjoy looking round it.

Thanks Nicola and Stephen. A look round the old Talbot family home and Milo’s beautiful gardens is thoroughly recommended by Dublin.ie

For more information visit: www.malahidecastleandgardens.ie
Stephen’s book is called ‘Into the Lion’s Den: A Biographical History of the Talbots of Malahide’ – www.intolionsden.com/

One of the reassuring signs of an economy in recovery is the proliferance of new bars and eateries in town. The microcosm of South Great George’s Street, moving into Aungier, Wexford and Camden Street is a good example. Recent months have seen several new venues pop up, and already they seem like they’ve always been part of the (shabby-chic) furniture - places such as the achingly hip Chelsea Drug Store, JT Pims and a brasserie-style extension to L’Gueuleton restaurant, which doesn’t seem to have a name of it's’ own and is simply signposted as ‘Bar’.