There’s a bigger picture behind the recently re-opened National Gallery wings so we went along for a visit.

In 2008, Ireland was in the grip of a financial crisis like none we had witnessed before. No wonder then that more than a couple of eyebrows were raised at the awarding of a €25m grant to the National Gallery of Ireland for the renovation of its Dargan (1864) and Milltown (1903) wings. But the truth was they were both painfully in need of attention. Apart from a few cursory repairs along the way, the buildings had seen little or nothing in the way of modernisation in their century-and-a-half history. Roofs leaked in heavy rain, floorboards groaned and swelled when the Victorian heating system was switched on every winter and the nation’s priceless collection of art was in grave danger of permanent damage from erratic environmental conditions.

In an odd way, the lack of investment through the years worked to our advantage…..We effectively had a blank canvas to work with 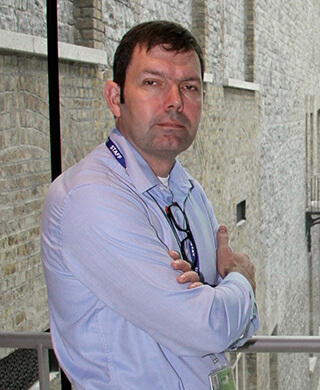 In 2011 the gallery finally closed the doors of these two wings and undertook an ambitious project to bring the buildings up to a modern museum standard. If you visit the newly reopened wings today, you’ll see they have both been restored to their former visual glory. But the majority of that substantial grant was spent on things that are a lot less obvious. The gallery now boasts an environmental control system that is the envy of the cultural sector across Europe and has set a new standard for the housing of a collection. Dublin.ie spoke to Head of Operations, Christiaan Clotworthy, about how the design team of architects and engineers seamlessly integrated these benchmark systems into the existing fabric of these great structures.

“In an odd way, the lack of investment through the years worked to our advantage. Rather than dealing with piece-meal work, the project was much more holistic. We effectively had a blank canvas to work with. That meant we could be far more sympathetic to the original fabric of the buildings.“ I’m standing with Christiaan outside the Merrion Square entrance of the gallery which overlooks a large courtyard. Although you couldn’t tell to look at it, beneath is an energy centre that stretches seven and a half metres below the surface. It contains a CHP system (Combined Heat & Power). Gas is burned to produce electricity, the byproduct of which is heat that is used to warm the gallery. At night, ice banks utilise cheaper electricity rates to freeze water, which in turn is used to cool the building when necessary. Controlling consistent temperatures and relative humidity are the key to the preservation of these works of art. Most pieces are either on wood or canvas. Those organic materials swell and contract if the heat or humidity changes. By keeping the temperature at 20ºC (+/- 2º) and the relative humidity at 50% (+/- 5%), you maintain a consistent environment and minimise the impact on the collection.

If fifteen people walk in from outside into a room on a wet day, the moisture content in that room will rise. The system detects that spike and compensates to ensure a consistent environment for the collection

Christiaan explains why it’s located here; “If you were to build a modern gallery on a green-field site, about 30% of the structure would be given over to these kind of systems. And in existing structures, it’s best to avoid roofs and basements to house them. They can interfere with light entering the gallery, are more of a risk to the collection due to proximity and it makes access for maintenance difficult.” As well as backup boilers and generators, the energy centre also contains a fire detection and suppression system. Dry piping through the gallery delivers a fine mist to suppress and extinguish any fire. “Galleries don’t like sprinklers” Christiaan remarks. With fine art adorning every wall, you can imagine why. 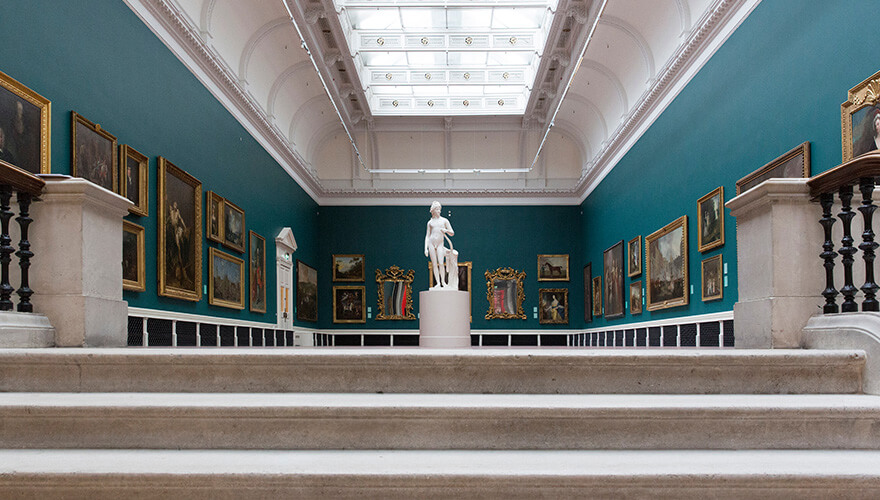 We go through the entrance and make our way to a courtyard that’s sandwiched between the two wings. It’s a new feature for the gallery but an important one, not just from an aesthetic point of view. The services from the energy centre are delivered to this central atrium and distributed to the two buildings. Also, the windows for both wings that were boarded up have now been uncovered, restoring the original function of this area as a light-well to illuminate the rooms that line it. However, the glass in these ginormous frames is far from what was originally installed 150 years ago. It controls the light that passes through it, minimising the harmful effect of UV light while still allowing sufficient lux to shine on the art. Christiaan points to the glazed, white bricks that adorn the walls of the Milton Wing; “This is a great piece of Victorian engineering. The surface of these bricks were designed to reflect soft light through the windows of the wing that faces it, illuminating the sculptures it formerly housed in the best way possible.”

Where modern interventions to the buildings have been made, there has been no attempt made to hide them behind pastiche. Shot-peened stainless steel, semi-polished concrete lift shafts, glass ceilings and terrazzo floors make for a contemporary feel to this space while still having sympathy for the existing structures. Christian points out that it all serves another important purpose; “Environmental control also means the experience of the environment that the public has. This space improves the visitor experience by making navigation easier. It gives a central atrium from which people can anchor their walk around the rooms. It also acts as a reference point that makes the levels in each building visible. That’s a vast improvement on what was here before.” 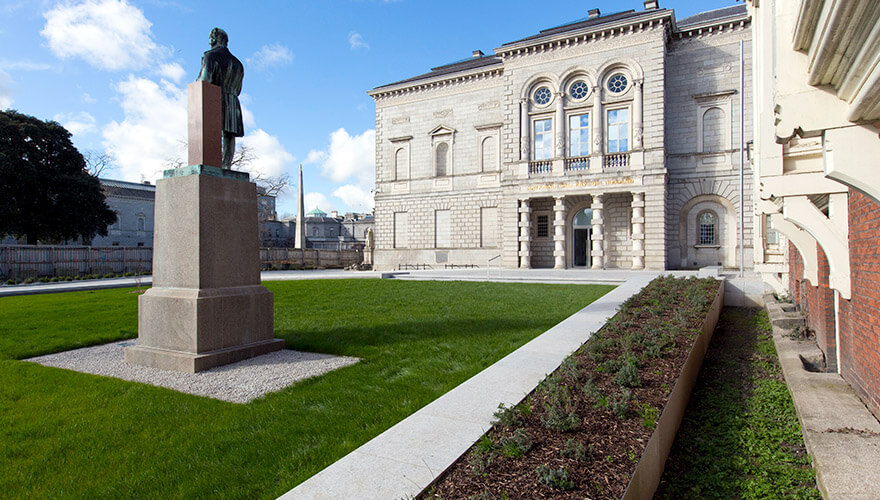 As we enter the hanging rooms of each wing, it’s clear how well the existing fabric of the buildings have been exploited to house the ducts necessary for such tight environmental controls. In the octagonal rooms of the Milton wing, the structural voids in each corner only give away their secret through a subtle six-inch high vent at the level of the skirting. From there, air is gently drifted out into the room, minimising vibration and any impact on the artwork. In the Dragon wing, the cast-iron grates of the benches that formerly housed the Victorian heating system and lined each room now contain ducts that serve the same purpose, but with far more technical sophistication. Christiaan points to silver pins that protrude from the walls at regular intervals; “These sensors are continuously measuring the temperature and relative humidity at 1.6 meters above ground level, which is the painting line. If fifteen people walk in from outside into a room on a wet day, the moisture content in that room will rise. The system detects that spike and compensates to ensure a consistent environment for the collection.”

The gallery is one of the first in the world to be entirely lit by LEDs. In 2008, the lights ordered were to be the latest evolution of that technology available at the time of construction, not at the time of specification. 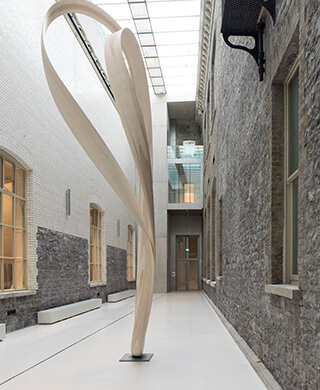 The technology was moving so quickly, they knew they would be out of date by the time they were fitted. LED lights are now warmer and less harmful to artwork compared to those in existence at the time. Now they meet international standards for the preservation of artwork and even have the ability to compensate for whatever natural light is entering the room.

There’s a lot to take in, and that’s without even stopping to glance at the masterpieces that surround you. Before beginning the restoration, gallery staff visited many museums constructed in the same period throughout Europe, gathering the best practices from each to apply this mammoth project. Now the staff from those great institutions are coming to Dublin, in awe at what has been achieved in our very own gallery. From buildings that were barely holding themselves together, we have now set an example for the world that ensures the preservation of our beautiful collection for many generations to come.