Behind the scenes at Dublin’s GPO

On one count at least, the GPO is a disappointment to its visitors. “People come in looking for a big green post box. It’s a bit of let down when I tell them there isn’t one,” says security guard David, who’s from Peckham but has Irish roots.

In place of the single green box you might have expected, there are two magnificent brass-and-mahogany receptacles for your letters. One is labelled ‘Dublin only’, the other ‘All other places’.

Careful observation of the postman who collects the letters would suggest, however, that whichever one you put your letter in, it’ll end up in the same bag. Not everything is quite as it seems at the General Post Office, but there is a lot to see.

There’s more to it than meets the eye

The GPO is famous as one of the rebel strongholds of the 1916 Easter Rising. There’s even bullet marks in the building’s handsome façade to prove it. However, there’s a lot more to the building than its role in the rising.

There are 900 people coming into work here every day.

Take the famous Cuchulainn sculpture by Oliver Shepherd, which is in the centre window of the public hall. When it was unveiled at the GPO on April 21st, 1935, Eamon de Valera called it “a beautiful piece of sculpture, the creation of Irish genius, symbolising the dauntless courage and abiding constancy of our people”.

As it happens, however, the events of Easter 1916 played no part in inspiring its creation: the piece was already complete in 1912. 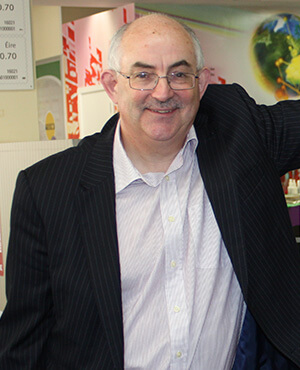 Angus Laverty, Public Affairs Manager, sees the sculpture every morning on the way to his office.

As we stop on the balcony overlooking the hall, he mentions its appearance in Samuel Beckett’s novel Murphy. A character in the book, Neary, gets it into his head that Cuchulainn’s “deathless rump” is “trying to stare me down”. So he headbutts it.

But if this artwork has been put to various uses by assorted writers and politicians, so too has the building that houses it.

The 200-year history of Dublin’s GPO

Upon its completion in 1818, the GPO was the main post office of the second city of the British empire – and an emphatic reminder of that empire’s presence in Ireland. However, as Angus explains, it was also the Postmaster-General’s home.

“His family and servants lived here. And there were stables, a bullion room, a gun room – it was like a city within a city”. And whilst the role it played in the Rising tends to overshadow other events in its history, many of those events were also of major national significance.

“Yes, it was a witness to 1916,” says Angus. “But it was also witness to the 1913 lockout and to the first and second World Wars, when there were huge numbers of Irish soldiers away fighting – and many more family members eager for a letter back from the front.

“There was the telephone room in the old days too, with banks of phones for talking to relatives in Inis Mór or England or America. In a sense, the GPO is the front room of the nation. It’s also been a focal point for protest and celebration. It’s always reinventing itself.” 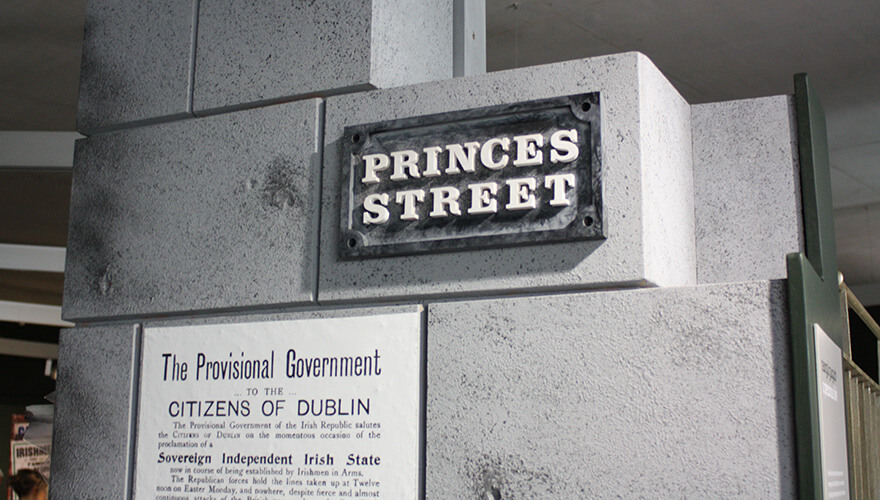 Changing with the times

To prove his point, Angus leaves the balcony and enters the heart of the building – insofar as an open-plan and much-remodelled office block can be said to have a heart. In an instant, the whole birth-of-a-nation vibe vanishes and we find ourselves in the middle of a modern call centre.

Here, 42 people and their suave supervisor Des (“I’m the eye-candy,” he says) deal calmly and good-humouredly with the public and its myriad of queries regarding anything An Post-related.

In a sense, the GPO is the front room of the nation.

And it was at this point that the penny dropped for Dublin.ie. Because the GPO we know is just the tip of the iceberg. As the headquarters of An Post, it is huge. There’s much more than meets the eye – at least for the general public.

Look up the next time you’re on Henry Street, above the ground level row of shops. The GPO stretches almost all the way from its frontage on O’Connell street all the way to Arnotts. In fact, there are 900 people coming into work here every day. This makes An Post one of the city centre’s largest employers. 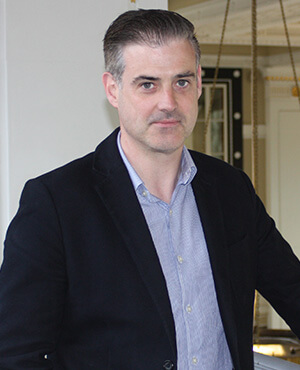 Right on cue, we meet Garrett Bridgeman, one of the people whose job it is to make sure this huge organisation continues to reinvent itself – something it’s done since the pillar boxes were red and telegrams were the next big thing.

Garrett, Managing Director of An Post mail and parcels, explains that he’s finalising preparations for the launch of an “enhanced parcel offering from An Post”.

Why? Well as his colleague Angus puts it, “the biggest growth industry is shopping – online shopping. Parcels is where it’s going to be at. We’re always looking for new opportunities here – from the invention of telegraphy to Amazon.”

Another job that straddles the old and the new at the GPO is the one that Aileen Mooney does. She’s the Philatelic Manager – the woman in charge of commissioning new designs for that most Victorian of innovations, the postage stamp.

Some of the new stamps that will grace an envelope near you soon include: a set with Irish phrases celebrating the Gaeltacht, another marking the Irish Civil War and one more remembering the death of Michael Collins. European-wide stamp issues will also feature myth-inspired art by Aideen Barry.

Aileen gets upwards of 100 suggestions a year from the public and various institutions for subjects that might be featured on new stamps.

If you’re interested, you can send your idea plus a small piece of supporting text into the GPO and Aileen will make sure it’s seen by the appropriate committee. 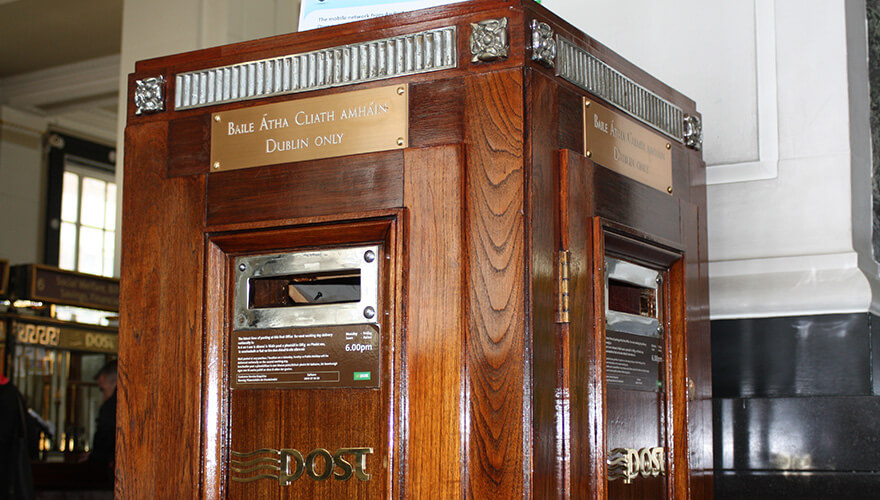 A source of Irish pride

Angus leads Dublin.ie away towards the door opening onto Henry Street. This used to be the entrance to the old TV and radio studios back in the days when broadcasting fell under the remit of the the Department of Posts and Telegraphs. It’s the very same door that Terry Wogan and Gay Byrne would have used on their way into work.

The public will be in touch if the flag on the roof doesn’t go up on time. 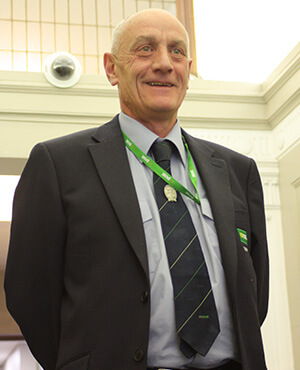 That’s too long ago for security guard Jim Bishop to remember. But pinned to Jim’s tie, Dublin.ie spots a medal bearing a likeness of another star of the olden days: it’s Michael Collins, the big fellah himself.

No one’s likely to forget the heroes of the early days of Ireland’s nationhood in the place where it all began.

Jim says he’s proud to work at the GPO. And that that word comes up a lot when Dubliners talk about it. Sadly, Jim has passed away since Dublin.ie visited the GPO.

“They’re proud of it. They really care,” says David, who I met earlier in the public hall.

“They’ll be in touch if the flag on the roof doesn’t go up on time”. (Eight o’clock in summer time; half eight in winter).

On our way out we ask Angus if he’s ever caught sight of a ghost from the Easter Rising. “No,” he says. “We’re in a place of work when all’s said and done, but I’m aware that I’m working somewhere that has an importance beyond that. There’s echoes in this building that you can’t manufacture.”

The GPO is one of Ireland’s leading attractions. It is beloved by Dubliners and visitors alike. Anyone can walk through the door and enjoy its beautiful interior, visit the stamp shop or post a letter. You can even visit the GPO Museum to learn more about its role in contemporary Irish history.

Croke Park. It’s not just a stadium. As Tim Carey, author of Croke Park: A History says: “More than perhaps any other sporting venue, Croke Park represents something that is beyond sport”. The stadium is the home of Gaelic games in Dublin, but it has always had a deeper importance – one that’s intimately connected with the birth and evolution of the Irish nation. “It is freighted with historical significance,” says Carey. “From the naming of the stands after

With its rounded name and huge dome centre – befitting of a maternity hospital – The Rotunda sits in the centre of Dublin’s north inner city, closing off the top of O’Connell Street. An end, containing so many beginnings. Surrounded by shops, theatres and the Garden of Remembrance, The Rotunda Hospital has long been at the heart of Dublin’s history. Throughout famines, protests, pandemics and revolution, it has quietly continued on with the ordinary business of life. The Rotunda Hospital’s history and origins Founded in 1745 by Bartholomew Mosse, The Rotunda is the oldest continuously-running maternity hospital in the world. 9,000 babi