A day out at the President’s house

It is a cold sunny Saturday morning in late spring, and we’re having a coffee in the courtyard of the Phoenix Park Visitor Centre, which is a find in itself.

It is tucked away beyond the Walled Garden, which is getting geared up for June’s Bloom gardening festival. The rhubarb that grows there ends up in the tarts at the café next door.

The fashion around us tends towards running gear. Babies who’ve been whisked out early toddle about the place, while people read papers and eat cakes. But we’re waiting in anticipation for a tour of Áras an Uachtaráin.

Tales from the tour

Every Saturday morning, on the half hour, three navy mini buses with gold harps take tourists the short distance from the Visitor Centre to Áras an Uachtaráin. They drive in through the old white gates and up the long drive to Dublin’s own little White House.

Red tulips are in bloom where we disembark. As all the phones come out for photos, one uniformed Garda frantically stops us from photographing the west wing – President Michael D. Higgin’s private quarters.

The President is lovely and very personable.

The tour group is small enough that the experience feels intimate. It’s like we’re being let in on a secret and Bernie Canning, our sing-songy tour guide, gathers us close to tell us that the Phoenix Park was opened as a royal hunting park for King Charles II in 1662. That’s when it was stocked with deer, she says.

Then, in 1665, a wall was built around it “to keep the Dubs out, because they got too fond of the venison”.

In 1751, Nathaniel Clements became Park Ranger and built the core of the Áras as his home. Thirty years later, his son sold it to the then English government as a residence for the Viceroy – the crown’s representative in Ireland.

Inside Áras an Uachtaráin

Since then, the house has had as many extensions as an Irish bungalow in the eighties. Add-ons were built to encourage royal visits. Accordingly, the first room we enter is the dining room built in 1849 for Queen Victoria.

What started out as a modest brick house for the park’s ranger is now an elaborate neo-classical home fit for a president. 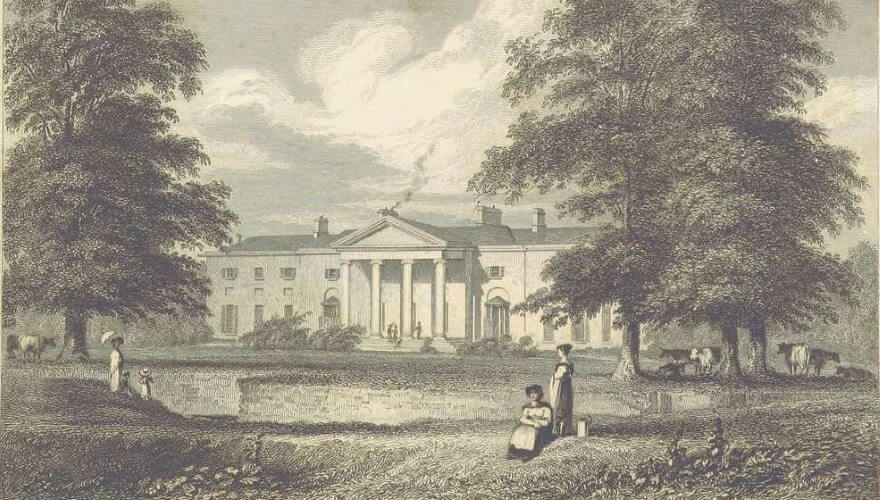 We stand under a Birmingham Crystal chandelier that was lit first with candles, then gas before becoming one of the first electric lights in Ireland. The room is also lined with portraits of past presidents. The men are painted in dark colours and shadow, while the portraits of Mary Robinson and Mary McAleese feature a riot of colour.

The best room by far is the President’s own private study, clearly in the full flight of use.

The oblong table in the centre of the room is the very one where the first Council of State sat to advise the president. It was moved from Leinster House to the Áras by Éamon De Valera.

However, the original fireplaces put in for Queen Victoria’s visit are long gone. Each Viceroy was allowed take something from the house at the end of his term. So one particularly enterprising fellow took the grand fireplaces.

Poetic presence in the Áras

In the State Corridor, the floors are plush with Killybegs wool carpets and the walls textured with stucco work. Bronze busts of the past presidents stand tall on pale green Connemara marble plinths. There are no portraits or busts yet of President Higgins. However, these will come once his presidency ends.

In the State reception room, a plaster transcript of the Louvre’s sumptuous Lemoynes painting, Time Saving Truth from Falsehood and Envy, adorns the ceiling. In the centre of the carpet, there’s a motif of a phoenix.

“Where’s the Dubs?” Bernie asks us, and everyone goes a bit shy about being questioned.

She recounts how the park got its name. ‘Fionn Uisce’, we’re told, from a spa of clear water where the locals bathed. Through mishearing and anglicisation, it eventually became ‘Phoenix’.

In 2004, at the park’s Farmleigh House, Seamus Heaney read his poem ‘Beacons at Bealtaine’ to 25 Heads of State during Ireland’s EU presidency.

Uisce: water. And fionn: the water’s clear.
But dip and find this Gaelic water Greek:
A phoenix flames upon fionn uisce here.

The Garda trailing the group makes sure we’re behaving and it brings to mind the story of another poet’s adventures at Áras an Uachtaráin.

In 1943, while working as a journalist, Patrick Kavanagh attended the Red Cross Ball. Wearing sandals and socks, he placed himself among the invited guests in the Áras drawing room and was subsequently barred for unbecoming conduct.

Fixtures from across four centuries

Throughout Áras an Uachtaráin, Pietro Bossi fireplaces heave with peat briquettes. Bossi, who emigrated to Dublin in 1785, came from a family of Italian stucco workers. He was so secretive about his marble techniques that he worked with a screen around him. He also sprinkled sawdust on the floor at night. If he saw a footprint in it the next morning, he’d walk off the job.

We walk past a book in a glass case, opened to the page signed by the Obamas. Then, into the Council of State room.

On his desk, amongst papers, an issue of Poetry Magazine.

Here, the heavily gilded rococo ceiling depicts Aesop’s Fables, while the art on the walls depicts Ireland’s historic realities: a Sarah Purser painting of Maud Gonne with her monkey, Countess Markievicz, Sean Keating’s An IRA Column and Simon Coleman’s Council of State painting. The latter shows men sitting around the table seen in the first room – among them future presidents Hyde, De Valera and O’Ceallaigh.

The doors of the French Drawing Room open out onto a tulip-planted garden. Only the brave stand under its quarter-ton chandelier. Commissioned for the Act of Union in 1801, it is engraved with garlands of roses, thistles and shamrocks.

There are pink couches too. One is an original from the Palace of Versailles. “Marie Antoinette may have sat on that couch,” Bernie says.

Next, she brings us into the best room by far – the President’s own private study, clearly in the full flight of use.

Taking a peek at the President’s study

The study’s ceiling was taken from artist Sarah Purser’s home and depicts Jupiter presiding over the four seasons. On the wall, there’s a print signed by poet Seamus Heaney. On a table, by the fire, sits a picture of the President and his brother on their First Holy Communion. Then there’s two little caricature sculptures of the President and his wife. There’s an IFTA trophy too.

We lean precariously over velvet ropes to see what the President has on his bookshelves. We see books on Wolfe Tone and Yeats, speeches from the Dáil and, rather surprisingly, a young adult novel by Irish writer Louise O’Neill. On his desk, amongst papers, is an issue of Poetry Magazine.

It says so much about him… he’s a man of learning.

150 people tour the house each Saturday. “The pride and joy for us is the President’s private office,” says tour guide Nick Mernagh. “It says so much about him, that he’s a man of learning.”

And does the President ever work on Saturdays? “He’d often drop in to tidy up a speech and we’d have to get out,” says Nick. “If he comes across a tour, he’ll interact. He’s lovely and very personable – as is his wife.”

He tells me that each President leaves their own stamp on the house. “Michael D, as we know, is a poet, and he has a little private room for when he wants to write poetry. He can go here and turn the key and that’s his spot. It’s actually out in the garden.”

This is much more than a tourist attraction

Nick sees the Áras as housing the collective memories of the Irish people. “The Louis XVI pink settee in the middle room, that was [a gift from] de Gaulle. When I was a child, de Gaulle came to visit De Valera and that always reminds me of him,” he says.

Nick sees tour guides, like himself, as folklorists. It’s their role to ensure that the stories of Áras an Uachtaráin – and the nation – aren’t lost.

And the tours aren’t static either. In August, when the dahlias of the Áras are in full bloom, the tour starts to explore the walled gardens too.

To find out more about Áras an Uachtaráin, visit the website. You’ll also find other great sights in our list of Dublin’s must-see attractions.

James Caulfeild, the 1st Earl of Charlemont, was a man who did things with style, and then some. His townhouse on Parnell St, which now houses the Hugh Lane Art Gallery, reflected his elegant, artistic nature, and was initially designed as an adornment to the city, where paintings by Rembrandt and Titian hung. When he embarked upon his Grand Tour - the 18th century equivalent of a gap year - he spent a rather impressive 9 years taking in the delights of Italy, Turkey, Greece and Egypt and became close friends with the future King of Sardinia. As you do.

A gang of lads. Shy, reserved, quiet. Just chewing the cud. Sure, every now and again, there is a bit of jostling. Just like you would expect from a group of healthy young males. However, there’s one thing you would not expect. And that’s the complete lack of interest in the women across the way. It’s almost like an old country ballroom. Men on one side. Women on the other. But come September, that will all change. Scents will be donned. Fights will be had. Women will be chased. Another generation will be born. So Park Ranger, Terry Moore, tells Dublin.ie as we cruise through a blustery Phoenix Park in his jeep.