Perhaps you seek refuge from the clamour of the city? Then head away from Stephen’s Green. Walk up Harcourt Street. Take a left. And approach the gates at the end of Clonmel Street. Enter. And breathe.

Around you are green lawns. Trees, Fountains. Statues. A rose garden. A maze. A grotto. An elegant promenade. And, crucial to our purpose here, not very many people. Indeed, mid-afternoon of an autumn’s day you may very well have the place to yourself. The place is Iveagh Gardens. It’s a Victorian park. So is Stephen’s Green, of course. But the difference in the atmosphere is pronounced – a direct result of its history.

Take that large sunken lawn on your left as you go in. In 1865 Iveagh Gardens was the venue for the Dublin Exhibition. Among the attractions was an archery ground. Walk – or slip – down the steep slope that surrounds the lawn and you’re standing on it. The lawn is five feet lower than the rest of the gardens for safety reasons. A novice Victorian archer, in her bonnet and her crinolines, could not be trusted to hit her target every time; it was calculated that an arrow could do less damage when loosed on this sunken lawn.

Iveagh Gardens takes it name from Edward Guinness, Lord Iveagh. This Guinness was a grandson of the original Arthur. He and his elder brother (another Arthur) inherited the great brewing business – and a fine house on Stephen’s Green – from their father Benjamin in 1868. When Edward became Lord Iveagh, the house became Iveagh House and the exhibition grounds which he had bought were incorporated into its garden. 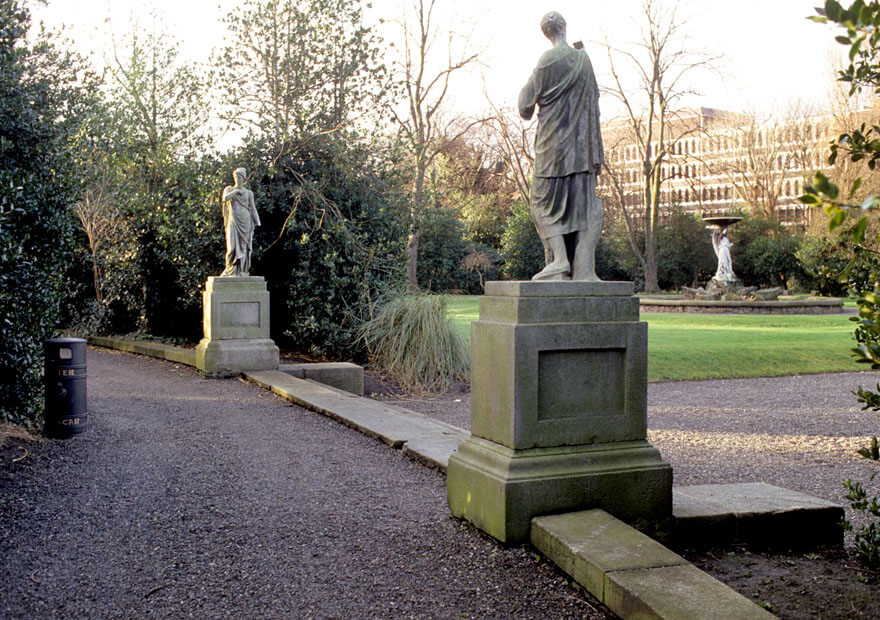 A note here on pronunciation: Dubliners pronounce ‘Iveagh’ Gardens as ‘ivy’ – excusable perhaps because the ideas of ivy and gardens are related. The current Lord Iveagh, however, head of the Guinness family, pronounces his own name as ‘Ive-a’.

He lives in another of his great-grandfather’s old properties, Elveden in Suffolk in the south of England. It seems that Elveden was purchased by the original Lord Iveagh largely because his friend King Edward loved shooting. The King suggested that Iveagh should acquire an estate where he could indulge this passion. And just outside the Earlsfort Terrace exit of the gardens, there’s evidence of another kingly interest that Iveagh catered for.

What possible purpose could that enormous red-brick, barn-like building serve, you wonder. No windows in the walls and a long skylight on the roof. Very strange. This was the venue in 1890 of the world real tennis championships. Not to be confused with the sport played at Wimbledon, real tennis is like a cross between lawn tennis and squash. It’s played on a court that resembles a medieval cloister. Guinness had this one built in his back garden by one of his brewery works engineers. It was finished just in time for the visit of the then Prince of Wales in 1885.

At five o’clock, a gardener rings a handbell and ushers you out the gate. He says that when they hear the bell, the garden’s resident rooks and crows know the coast is clear. They fly down to the ground where they attempt to smash open tasty walnuts and chestnuts, dropped by the trees. You leave them to it.

Great to be back in Iveagh Gardens today- a hidden gem in the centre of Dublin – check it out next time you visit pic.twitter.com/PjoNCqAGgv

As you head back into the city centre, look back at the concert hall building. There are plans for it to house a new planetarium that will open out onto the gardens. If you’re fond of the cosmic swirl of a pint of Guinness as it settles, this seems apt.