The Dublin museum that does things a little differently

The Little Museum of Dublin isn’t like any other museum in the city. Since 2011, it has run exhibitions showcasing local history – with the help of local people. It is also doing its best to help locals fall in love with their city.

So what’s the thinking behind its unique approach? We took the tour and spoke with founder, Trevor White, to find out.

In the drawing room of an 18th century Georgian townhouse, a window looks out over Stephen’s Green. Sitting on top of the frame are six fluffy ducklings, tiny masterpieces of the taxidermist’s art. But like every other exhibit in this remarkable museum, they have a good reason for being there – as our tour guide, June Fitzgibbon, points out.

The ducklings are a playful reference to a ceasefire that was called during the Easter Rising. For a brief period, the Irish rebels and army soldiers agreed to stop shooting at each other so that the park keeper could feed the waterfowl on the Green.

We’re all about putting on a nice show for our visitors.

‘Playful’ is a good way to describe the museum’s modus operandi as a whole. Or, as founder Trevor puts it: “We educate by stealth. We use entertainment as the vehicle, basically giving people a good time. Because, if they’re not having a good time, they’re not going to be able to learn any new information.”

“Forget dates,” adds Megan McDonnell, who was the museum’s first ‘Oscar Wilde Fellow’ – a role that is all about injecting performance and theatricality into the museum. “Boring museums are ancient history,” she says. “We’re all about putting on a nice show for our visitors”. 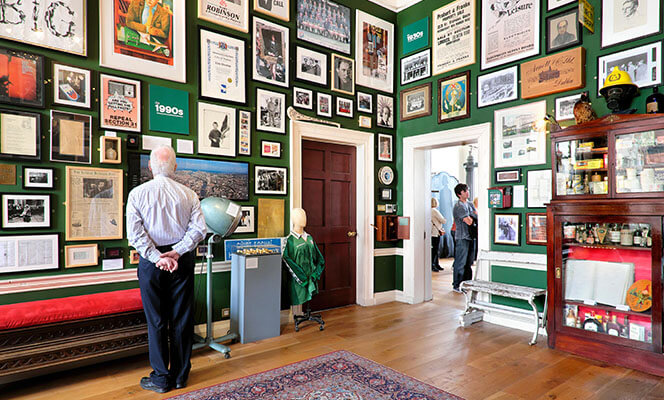 Inside The Little Museum of Dublin

An extremely eclectic collection donated by the public

Trevor describes the Little Museum of Dublin as a people’s museum – and he means this in a very literal way.

“I suppose what makes it unusual is that public donations from the people of Dublin created the entire collection. When we launched the museum we had no building, we had no artefacts and no money,” he explains.

We gave the people of the city a kind of a connection to it. It is their museum.

The premises itself was also donated by Dublin City Council and the collection it now houses goes way beyond eclectic. You’ll find everything from a pot of Sudocreme (“Invented by Dublin pharmacist Thomas Smith in 1931,” reads the caption, “now sold in 30 countries around the world, it remains your only man for nappy rash”) to an original Georgian roof slate from Russborough House.

If there are precedents for this sort of thing, Trevor doesn’t know of them. “I’ve not seen a museum with a collection that’s created by public donation,” he says.

Two practical advantages were gained by making that public appeal for assistance. “The first,” says Trevor, “was that we were able to build a collection, and the second is that we got public buy-in. We gave the people of the city a kind of a connection to it. It is their museum”.

Giving back to the city of Dublin

According to Trevor, the Little Museum of Dublin is all about forging connections – between Dubliners and their city and between the city and the rest of Ireland. 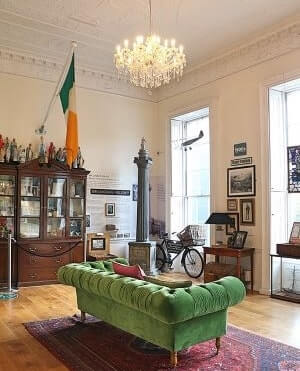 “Dublin has a very complex relationship with the rest of the country,” says Trevor, who is a Dubliner himself.

“Obviously, there are sound historical reasons for that. It was the centre of colonial occupation, etc. But I suppose my conviction is that it’s time to move on… We’re nearly 100 years an independent nation, and without a strong dynamic capital, the rest of the country is banjaxed”.

In addition to its regular guided tours and an ongoing series of temporary exhibitions, the Little Museum runs two innovative outreach-type projects.

The first is an education programme for school kids from all over the country. It’s appropriately titled I Love Dublin.

As Dubliners, we often overlook its charms.

“It’s free and it’s basically about developing civic pride here in Dublin,” says Trevor. “What typically happens is a group of kids will come in here at 11 o’clock, and they’ll be rather bored and yawning and not very happy. Then, they’ll leave an hour later and some of them are walking a little bit taller.”

Ultimately, this is what the Little Museum of Dublin is all about. It aims to create a new generation of civic-spirited leaders who are proud of their capital city. 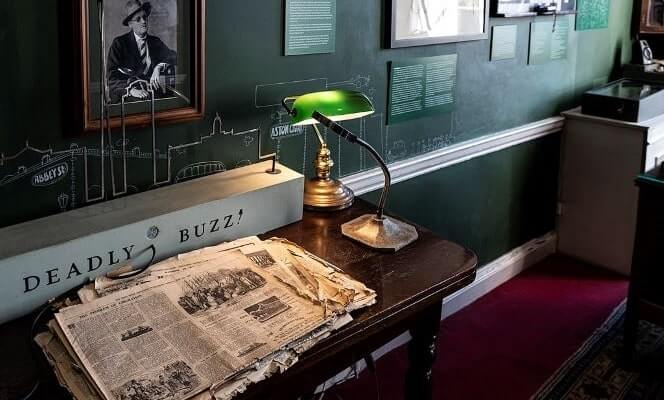 The Irish Times Room at the Little Museum of Dublin

The other initiative is the City of a Thousand Welcomes. This is a ‘greeter programme’ where locals volunteer to meet a visitor to the city. The Dubliner volunteers their time and the visitor gets a free guide to the city. They can chat over a cup of tea or a pint provided by one of the programme’s hospitality partners: the Merrion Hotel, the Porterhouse or Hatch and Sons.

With enthusiasm, Trevor says: “It happens every day. It’s a lovely thing and it’s a hugely important part of our work – and something we’re very proud of”.

Learn to love Dublin with the Little Museum

Trevor, who was previously the editor of Dubliner magazine, has long seen himself as a champion of the city.

“I spent most of my career writing about Dublin,” he says. “I think it’s one of the great small cities in Europe. But I also think, as Dubliners, we often overlook its charms.”

And that’s another thing that the Little Museum of Dublin has in spades: charm. Post-pandemic, the museum has expanded its offering to include outdoor walking tours of St. Stephen’s Green and entertaining treasure hunts for kids.

As befits its name, the Little Museum of Dublin tour length stands at around 29 minutes – and you’re sure to enjoy each one of them.

The museum is open every day from 10am – 5pm and you can pre-book tickets on its website. It is located just off Dawson Street, a stone’s throw away from Grafton Street.

Want to explore more of the city’s history? Check out our guide to Dublin’s must-see museums.

Pat Liddy is many things. An artist, historian, writer, illustrator, broadcaster, mapmaker, and environmental lobbyist who has helped make Dublin a global tourist attraction. The author and illustrator of over seven books on the city, as well as others on Irish cultural sites, he is the operator of Pat Liddy’s Walking Tours of Dublin. I was born and reared in what we might call the inner city, which in this case was Phibsborough. So, in the first place, that qualifies me as a true Dubliner, because the definition is “Born between the canals,” isn’t it? If I wanted to come into t

Dublin’s parks have undergone a renaissance in recent years. Once a location for a quiet game of frisbee or a poetic wander amongst the flowerbeds, they have of late been injected with a new vitality. Food stalls, open-air cinema, yoga, and family events are now a given and in the summer months, Dublin’s parks host free lively festivals and original evening events that give the city’s pubs and clubs a run for their money. RUN FOR FUN, WALK FOR HOPE Every Saturday, in parks all over Dublin, early birds can enjoy a free 5k timed parkrun courtesy of parkrun.ie. Operating since 20

The Book of Kells in Trinity is arguably Dublin’s most famous work of art, but what about all the famous Irish paintings and other international works of art in Dublin galleries? Here are ten of the major artworks waiting to be discovered behind the doors you walk past every day. In the National Gallery of Ireland: With entrances on both Merrion Square and Clare Street, the National Gallery is the leading home of art in Dublin – and in Ireland. With the exception of some special exhibitions, admission is free for all. Here are just four of the ma