The author and illustrator of over seven books on the city, as well as others on Irish cultural sites, he is the operator of Pat Liddy’s Walking Tours of Dublin.

I was born and reared in what we might call the inner city, which in this case was Phibsborough. So, in the first place, that qualifies me as a true Dubliner, because the definition is “Born between the canals,” isn’t it? If I wanted to come into town, I usually walked. It was only 20 minutes away.

That qualifies me as a true Dubliner because the definition is “Born between the canals,” isn’t it?

I got to know the city very well, but that’s as far as it went at that point. I wasn’t really interested, per se, I just got to know it. It was like James Joyce going through all his houses when his family moved from time to time on the South Side and then on the North Side of Dublin. He began absorbing everything, but he didn’t intend at that point to write any of his great works. 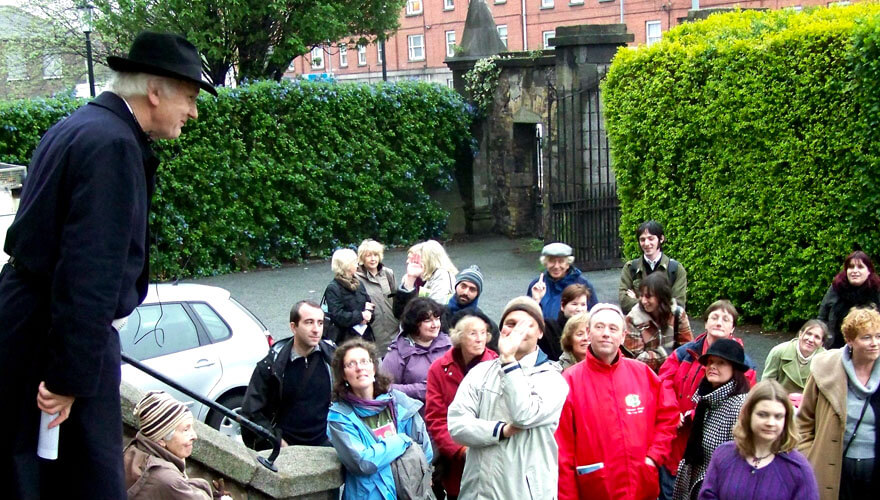 I joined Aer Lingus in 1963 after I left school. I didn’t go to university. Families in those days just got their kids to go out and work. But then, the university of life kicked in. I started travelling the world in the ’60s and ’70s, and it really opened my mind. And by the end of the ’70s, I guess I was looking at Dublin with different eyes. Dublin was different.

Dublin was tired, derelict to a large extent because of lack of investment. I could see there’s potential in our little city if we did something about it. It started to niggle me. It seemed quite a hopeless place, the easiest option for developers was just to knock down the old stuff rather than restore it. But it was death by a thousand cuts. And I felt by the early 1980s, at least 500 of those cuts had already been made.

I started travelling the world in the ’60s and ’70s, and it really opened my mind. And by the end of the ’70s, I guess I was looking at Dublin with different eyes

I was starting to draw and sketch and colour scenes around Dublin. And lo and behold, I was selling them. So, I said, “Maybe I can use this alleged talent to draw attention to parts of Dublin that just needed to be re-looked at.” So, I started writing a weekly column for the Irish Times. It was a unique sort of experiment. I did a drawing of wherever I was going to talk about, wrote three to four hundred words on the background of that place and put in the human interest stories and so forth. What I was aiming at was that people would see the value of a place, but that the owners would too. 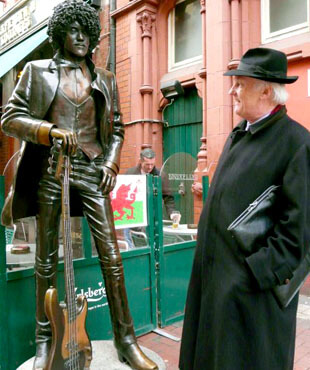 With all the experience I had gained it seemed obvious I should set up some kind of a tour company. So out of that came Pat Liddy’s Walking Tours. We do historical walks, architectural walks, medical history walks, legal tours, tours of the canals, rivers, the mountains, the Docklands. If people have a specific request, we’ll answer it. The most important thing is to give a good memory of their visit. Because Dublin is unique with one or two other cities in Europe in that it’s worth a second, if not a third visit.

Tourists can’t get over the fact that the footpaths are busy at all times of day, and crowded, with people of all ages. That’s a big surprise. The cleanliness of the city, the remarkable architecture… there’s a sense that the Dublin people are kind of proud of their city. And that’s why we have to keep up. And there’s always a danger in the future that we get too comfortable with this, or get too blasé or get forgetful.

I’m always excited about the new stuff. I’m active in discovering Dublin, between 40 and 50 years at this point. I’m still finding new stuff, and it’s always exciting. Our guides continuously have to be updating, have to learn more stuff.

Galia (pronounced Ga-lee-ah) Arad is just back from playing support on Marc Almond’s UK tour. Last year, she toured Ireland with Jack L. She regularly tours Europe with Jools Holland, most recently playing support for him at the 3Arena in Dublin. And she owes it all to Shane McGowan and his manager Joey Cashman, who in a strange, unexpected way set Galia’s music career in train and took her from small-time gigging in New York to centre stage at the Royal Albert Hall. Coming from a classically trained background, Galia moved to New York from her Indiana home in her early twenties to pursue a singer-songwriter career with a musical style that she calls “Bob Dylan meets

You may not know it, but Capel Street is one of Dublin’s most historically significant streets. It was a fundamental part of an extension of the city north of the river by Sir Humphrey Jervis, who built a large chunk of his estate around St. Mary’s Abbey. In 1676 he built Essex Bridge, (now Grattan Bridge) establishing Capel Street as one of the main links between the north and south of the city. A great contrast to the Capel Street of today, in the 17th and 18th Centuries it was residential, lined with freestanding mansions, each of which had large gardens and courtyards. Later on in the 18th Century t

Mary Louise ‘Maz’ Reilly, a sports development officer with Dublin City Council, plays rugby for Ireland. She was on the Grand Slam-winning side of 2013 and plays in her third World Cup tournament, hosted by Ireland, this month. It was always soccer and Gaelic football at home. No one played rugby. One day a friend asked me to jump in and give a dig out and I was like ‘there is not a hope, that sport is way too rough’. Anyway, she got the better of me and I got involved and realised that I actually really enjoyed rugby. For me, in work, it’s the same thing. Whether I’m out cha