Last year, she toured Ireland with Jack L. She regularly tours Europe with Jools Holland, most recently playing support for him at the 3Arena in Dublin. And she owes it all to Shane McGowan and his manager Joey Cashman, who in a strange, unexpected way set Galia’s music career in train and took her from small-time gigging in New York to centre stage at the Royal Albert Hall.

Coming from a classically trained background, Galia moved to New York from her Indiana home in her early twenties to pursue a singer-songwriter career with a musical style that she calls “Bob Dylan meets Britney Spears.” She worked day jobs as a dog-walker and a PA, gigging at night in “the usual places like the Bitter End on Bleecker Street, very small stuff”.

“It all started when I wanted to have Shane MacGowan do the liner notes for Ooh La Baby,” she says, referring to her second album. The Pogues had had a big impact on her music after her big sister left their CD behind when she went to college.

we’re thinking maybe Shane wants to produce a couple of the songs.

“I had the idea on the subway in New York.” Through a lucky connection, she got her hands on Shane MacGowan’s manager’s contact info. “His manager’s name is Joey Cashman. I’m forever indebted to him. I hate reaching out but I called him every day. I wanted it so bad. And he would answer the phone and I would be like, ‘Hi Joey, this is Galia calling, I am the liner notes girl’. He’d be like ‘F**k off. Call me tomorrow, I’m busy.’ I would really struggle to understand him. And as an American, you’re like, where’s the customer service?” she laughs. “Finally Joey was just like, ‘send your demo to me’.” 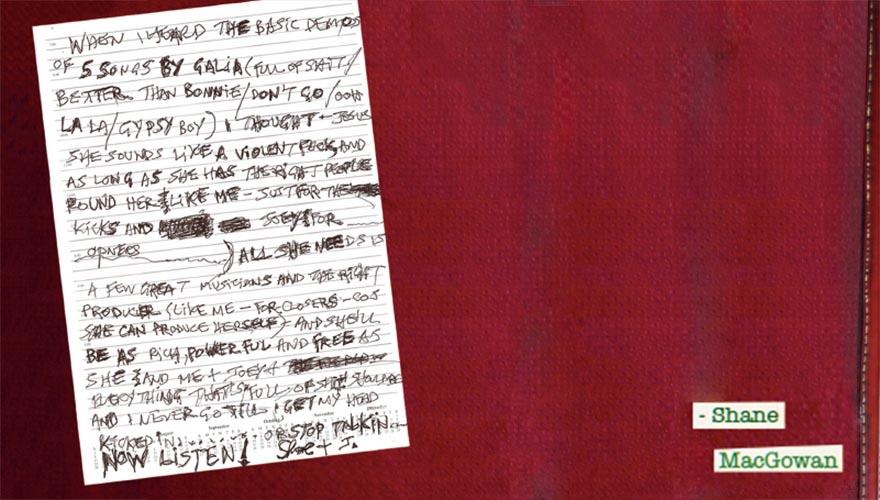 Months later he called to say he’d listened to the demo with Shane and “we don’t think it’s shite. It wasn’t like we loved it or you’re very talented. So that was like the start of seeing how Irish people do a compliment,” she says, smiling. “He was like, we’re thinking maybe Shane wants to produce a couple of the songs.”

The timing couldn’t have been better. Galia was going on tour with blues musician Kirsten Thien. “We were just going to play a few gigs in Dublin. The Ruby Sessions was our first slot here.”

She soon came to realise that when you’re dealing with Shane McGowan, plans are never set in stone. At the last minute, Joey told her he had organised a gig. “We did support for Republic of Loose in UCD for the Fresher’s Ball in 2008. Shane was supposed to come to the gig and was running late. We were just the support act, and no one knew anything about us, two American chicks.” Finally, Shane arrived. “It had been such a long time coming.”

Taxi drivers are always like, you moved to Dublin for a man, and I’m like, ‘yeah, Glen Hansard’.”

After that Joey organised a studio session for them in Vicar Street studios. “For some reason, it all pieced together very magically, and that’s one of the reasons I fell in love with Dublin because the magic happened and it was all very last minute. Everything was one little puzzle piece at a time.”

Shane was late again, so late they began to give up. “Finally Shane walks through the door with a big plastic bag. It was like his briefcase but like a plastic bag. I didn’t understand a word he was saying.” 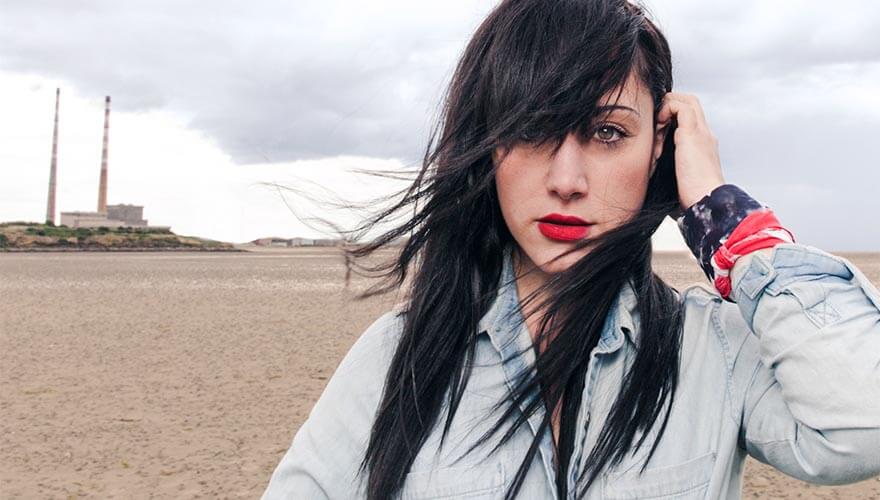 He gave her direction while she recorded, then he joined her on a couple of tracks. “It was all a shock to me. It wasn’t really until after that I thought, these are little bits of genius that he put together.” And then at the end of the session, there was one more magical moment. “I had sent Joey a recording of Rainy Night in Soho, really slowed down. And Joey said, Shane, I want you to hear this version. He played it over the speakers. Shane was leaning back in his chair listening, and I was like, this is one of the biggest moments of my entire life.”

Galia didn’t realise then that Shane would continue to influence her career path. He had been slotted to guest on a Jools Holland tour, and it was arranged for Galia to be the supporting act. When Shane’s role fell through, she stayed on. She formed a lasting relationship with Jools Holland’s management, which has taken her to the Royal Albert Hall and the 3Arena.

She went back to New York periodically, but it was clear that her career had more momentum on the other side of the Atlantic and a fateful concert in New York made her finally decide to come to Ireland to live.

I get really nervous with Irish audiences, not in a bad way, but I feel like I really want to do my best for them

“I saw Glen Hansard in concert in New York at the Beacon Theatre. At the end, I turned to [my friend], and I was like, ‘I have to move to Dublin’. It was this weird vibe pulling me here. At this point I had no romantic connection here. Taxi drivers are always like, you moved to Dublin for a man, and I’m like, ‘yeah, Glen Hansard’.”

Dublin’s music scene had its own unique draw. “It wasn’t as much of a rat race here as it was in New York, where I was around a lot of amazing musicians and people working their asses off, that was great. But there was something here, about the attitude toward music and musicians, where it’s built into the culture. When I’d say I was a singer-songwriter in New York, it’s like, ‘oh another aspiring whatever’, whereas here success isn’t a priority. It’s more like, that’s cool, we love live music.”

If you’ve ever seen Galia perform, you will know she has an innate ability to charm a crowd, telling stories about her own life, being frank about her romantic life and the highs and lows of her career so far – all of which form the material for her songs.

“I get really nervous with Irish audiences, not in a bad way, but I feel like I really want to do my best for them. I feel like once you have them, they’re the best. But you do have to earn it! Once you do though, they’re with you all the way.”

Dublin is very much home now. It was lonely at the beginning, she admits. “I had really lonely times here but it didn’t hurt the experience. I loved that feeling of walking down the Dublin streets, I remember I used to listen to Bob Dylan’s song ‘Momma You’ve Been on My Mind’, feel the rain on my face and think I feel so sad, but I feel so happy. That’s my being an artist thing,” she laughs. “Dublin is the perfect place to feel sad in. No one pressures anyone to feel happy. Really everyone just lets you be.”

Keep up to date with news, events and more on galiaarad.com.

Laura McGann’s documentary, Revolutions, traces the growth of roller derby in Ireland. It’s full of outspoken characters and breakneck action, and it tells the compelling story of the birth of a sport – the creation of something new – in recession-era Ireland. McGann, originally from Newbridge in Kildare, studied media at Ballyfermot College of Further Education and film at Liverpool Hope University. She returned to Ireland in 2010, when ‘a lot of things were winding down or ending’ in the country. Roller derby ‘was starting and had a really great energy about it. So, I think the timing

Walking through Temple Bar on a midweek afternoon, the sounds of céilí bands and lads on guitars belting out U2 covers tumble out onto the street every time a pub door swings open. Buskers are so much a part of Dublin culture that Glen Hansard starred in an Oscar winning film about them. Phil Lynott’s statue off Grafton Street is often draped in rocker pilgrims from around the world, a replica of Rory Gallagher’s rusty guitar hangs over his own designated corner near Meeting House Square, and Whelan’s is a mecca for any serious music lover. Dublin’s rock heritage is as legendary as its literary one, with the city punching well above its weight on the international scene