Walking through Temple Bar on a midweek afternoon, the sounds of céilí bands and lads on guitars belting out U2 covers tumble out onto the street every time a pub door swings open.

Buskers are so much a part of Dublin culture that Glen Hansard starred in an Oscar winning film about them. Phil Lynott’s statue off Grafton Street is often draped in rocker pilgrims from around the world, a replica of Rory Gallagher’s rusty guitar hangs over his own designated corner near Meeting House Square, and Whelan’s is a mecca for any serious music lover. Dublin’s rock heritage is as legendary as its literary one, with the city punching well above its weight on the international scene.

The Irish Rock n Roll Museum is situated inside the black and red walls of a complex that comprises the Temple Lane Studios and the Button Factory music venue and so unlike other museums, there is nothing stagnant and trapped behind glass here. This is a place that is alive and throbbing with music being made. As we walk through the corridors, some members of Dublin indie rock band Little Green Cars pass us by and then behind a closed door, we can hear them belt out some new lines a capella. Music technicians nipping out for a sandwich and coffee look appropriately pissed off as they squeeze past our eager little gathering in the corridor, the long-haired man booking acts at reception shouts over our tour guide to make himself heard on the phone. Sound equipment is piled high in the corridors and the people on this tour can barely conceal their delight.

Rory Gallagher, was once a guitarist for the Rolling Stones until he left them
“’cos he just was not into the lifestyle”

Opened by Paddy Dunning in Dublin’s Temple Bar, Temple Lane Recording Studios, around which this museum is built, has been at the centre of Irish music since 1984. From Whipping Boy to Rihanna, a huge selection of acts have recorded here and the studio is considered a home of independent Irish music and Irish bands, a place to come and focus and try out new sounds, little basements in the heart of Dublin in which to build music.

Our tour guide, David Rowe is a professional actor who has been working as a tour guide for over a year now. Working us through the corridors, David stops at the guitars and albums of famous acts like The Pogues and Enya to impart his wisdom and some trivia. We hear how Rory Gallagher, was once a guitarist for the Rolling Stones until he left them “’cos he just was not into the lifestyle,” how Gallagher would sweat onto his guitar until it became “a rusted down piece of metal that looked like he got it out of a skip.” 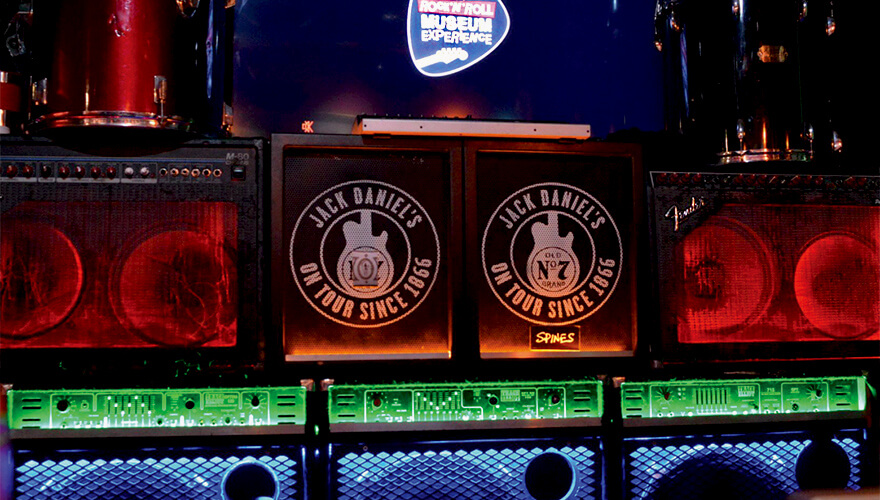 We move past an odd memento: a framed set of Michael Jackson’s pyjamas. David tells us that Paddy Dunning who owns this complex also owns Grouse Lodge, a residential studio in Wicklow where bands go to live for a couple of days or months while recording. Michael Jackson, who was only meant to stay for two weeks, ended up staying for over six months and took a liking to Dunning’s pyjamas over coffee one morning and so they swapped.

Then into a room dedicated to a U2 exhibit which will delight the hardcore fan. David tells the now legendary tale of Larry Mullen’s 1976 post on a notice board in his school in Mount Temple Comprehensive school “looking for a bunch of lads to come to my house after school and play some music,” thinking it would be called the Larry Mullen Junior band, how they became Feedback, then The Hype, then finally U2.

The exhibits are on the eclectic side, and maybe more than a little tongue in cheek. There are some early tickets from the days when U2 were known as ‘Bono, The Edge and Friends’, with prices of £5. A big brown eighties wax jacket hangs on another wall, that Adam Clayton kindly placed over the shoulders of a soaked fan after a rainy gig.

In the next room, we watch a short film about the evolution of rock music in Ireland, and “music as the fabric of Irish life”, starting in March 1962 when 18 million Americans watched the Clancy Brothers perform on the legendary Ed Sullivan show and Bob Dylan called Liam Clancy the best ballad singer he’d ever heard. In just over ten minutes, the film works through Christy Moore’s progression to seminal folk hero, Planxty’s work ‘Timedance’ inspiring Riverdance, a baby faced Johnny Logan securing three of our seven Eurovision victories. There’s the treat of some footage of Luke Kelly and how the Dubliners sound emerged from O’Donoghues pub, on Baggot Street in Dublin in 1962. Only when seen together in this short film, does the extent of the country’s musical achievement become clear: from Bob Geldof’s work with Live Aid to Sinead O’Connor ripping up the Pope’s photo on the Letterman Show.

Nile Rodgers, Kodaline, Van Morrison have
all sat in this dressing room

In a room set up for jamming, the tour group stands awkwardly around while David tries to encourage people to have a go, even offering a tambourine. One girl says shyly she’d like to try the bass, and then another gets in behind the drums. Then an American with long hair lifts the last remaining guitar. Together they play a rather impressive version of The Cranberries Zombie with David occasionally running up on stage, moving their fingers around on the chords. Before long, down in a mirrored basement in Temple Bar, within a couple of minutes, a group of strangers are making music together.

The Strypes guitar, images courtesy of the Irish Rock’n’Roll Museum

Then David takes us up dark stairs to the backstage of the live music venue, The Button Factory, which, we’re told, used to be a lingerie factory, “so it has a bit of a sexy past.” Nile Rodgers, Kodaline, Van Morrison have all sat in this dressing room where the lightbulbs frame the mirrors in the time-honoured way. The corridor to the stage area is lined with iconic photographs by Liam Quigley, Ireland’s pioneering music photographer who worked for Spotlight magazine in the 70s.

Out across the street we go and into Temple Lane Recording Studios. Downstairs is the Sun Studio, a nod to the famous studio in Memphis where Elvis recorded. Rihanna recorded the song ‘Love the Way U Lie’ here.

Upstairs in the Apollo Studio, there’s a poster from the 2006 film Once. It was here that the scenes of the album recording in the film took place. ‘This better win an Oscar,’ they were told by the owner.

The room here is filled with the buttons and gleam of a 75 track Nemes Recording Desk, “the Rolls Royce of sound desks”. We hear how WILL.I.AM came here to record in secret but couldn’t resist blasting the music and standing out on the balcony to the delight of the crowds below.

The life and music of Crumlin man Phil Lynott plays no small part in the tour. We learn about his time in his first major band, Skid Row, when his best friend Brush Shiels taught him how to play guitar, and how Thin Lizzy was formed in 1969 and named after a character from a Dandy comic. 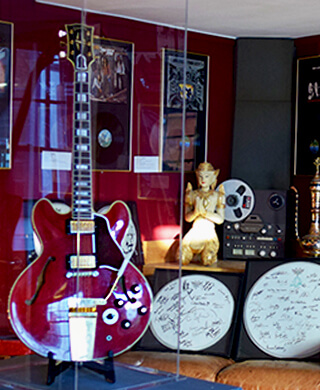 Some of Phil’s infamous bass guitars are here with set-in mirrors so he could pick someone out in the crowd to shine a light on. There are also some of his report cards: he got a C in music in school. A new bass guitar has come in recently, donated from Phil’s mother and David takes it out from its velvet casing with delight and drifts off into a moment of private reverie.

Afterwards, I have a chat with David about the surprising impromptu gig in the basement. He admits that with some groups, trying to get anyone to play can be like “pulling teeth” but then you get moments like today, when “people will get up who speak completely different languages and they’ve never met and they end up like a full on band, you’d swear they were a professional band. It’s insane. Those moments are rare but it does happen.” Although, he confesses, all too often, he has had to smile good-humouredly while yet another of these impromptu bands decide to name themselves ‘U3’.

To find out more about the Irish Rock’n’Roll Museum, visit irishrocknrollmuseum.com

Catherine Conroy
Catherine Conroy is a Dublin writer, regularly contributing to The Irish Times, and dabbling in fiction in The Dublin Review. Her novel continues to wait patiently in a drawer.
By using our website you are consenting to our use of cookies in accordance with our Cookie Policy
Copy link
CopyCopied