Standing on O’Connell Street looking north, you have to cock your head a little to spot The Gate Theatre’s modest white-lettered sign. It sits high and unassuming over Dublin’s main thoroughfare.

Yet, there is something of the Grand Dame about The Gate Theatre, which stands along Parnell Square East.

Ascend the theatre’s stairs from a city thick with construction and you enter a cocoon of chandeliered ceilings and people ‘dressed for the theatre’. And it might be that the elegant building itself has directed the theatre’s narrative. 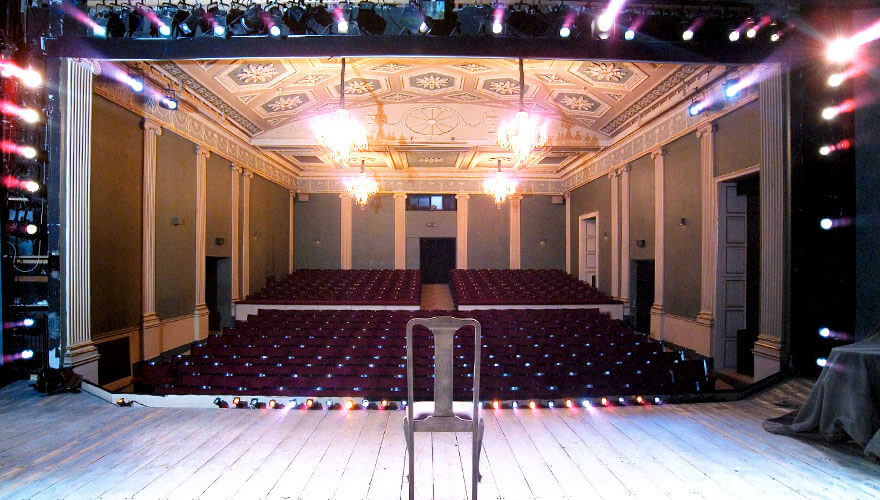 The Gate’s auditorium – Image courtesy of The Gate Theatre

There is a rare hush of reverence here. And it has long been the place to see the great, often camp, classics: Coward, Albee, Williams and Wilde.

Seating 371 audience members, the roof seemed to lower and the room sweltered for the humid hysteria of Tennessee Williams’ A Streetcar Named Desire. And where else but that compact room could the audience feel like tense guests at a bad party for Edward Albee’s Who’s Afraid of Virginia Woolf?

The beginning of The Gate Theatre

The Gate itself was born in 1928 in the belly of The Abbey. It played for its first two seasons at the Abbey’s smaller stage – the Peacock Theatre. It was the mission statement of The Gate Theatre’s founders, Englishmen Hilton Edwards and Micheál MacLiammóir, to “make Ireland a place fit for James Joyce to live in”.

They aimed to do this by putting on innovative productions by European and American dramatists, as well as classics from the modern Irish repertoire.

It was an old Dublin joke to say that with the Gate’s classical European flair and the Abbey’s more nationalistic rural fare, together the two were ‘Sodom and Begorrah’. 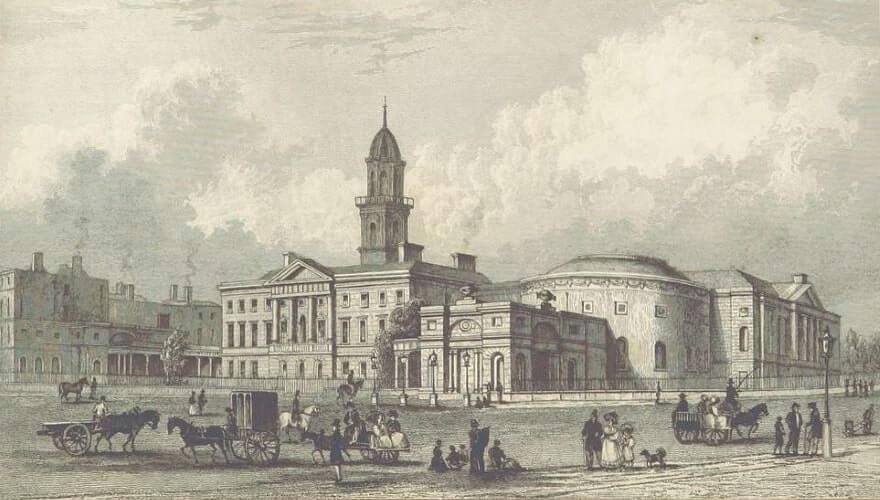 The Gate began life as a standalone theatre on Christmas Eve 1929. This was when the lease for 1 Cavendish Row was first signed. Once part of the 18th-century Rotunda complex, the theatre had been used by the maternity hospital to host concerts and other fundraising events.

On 17th February, 1930, the theatre opened with Johann Wolfgang von Goethe’s Faust – a tragedy still considered to be one of the greatest works of German literature.

In the building’s ninety years, the theatre has launched the careers of dozens of legendary actors – Orson Welles and Michael Gambon amongst them. (More recent examples include Paul Mescal, Clare Dunne and Emmet Kirwan.) However, there have only been five artistic directors at the Gate in that time.

Michael Colgan took charge in the 1980s and served 33 years. While award-winning director Selina Cartmell took the helm in 2017 and brought a sea change to Dublin’s theatre scene.

Since then, the theatre’s new programmes have attracted fresh faces and offered a series of bold productions. These include eleven world premieres and one show that even changed the venerable building itself.

In May 2022, Róisín McBrinn took over as artistic director. However, she plans to carry on the great work of the past five years. This includes a continued focus on diversity and developing female directors.

A true home for actors and theatre-goers alike

Dublin actor Owen Roe is delighted to have played a part in this new chapter of the theatre’s story. He is a long-time prominent player in Gate productions. 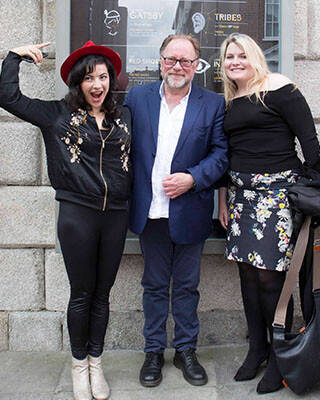 In the early nineties, he played Tybalt in Romeo and Juliet. Since then, he has played immense characters like Big Daddy in Cat on a Hot Tin Roof and Claudius in Hamlet.

His first encounter with the Gate Theatre was at the age of 13 when his parents took him to see Hugh Leonard’s Da.

“They weren’t great theatre-goers, but we did go to the odd play,” he says. “My father was a truck driver and my mother worked in a biscuit factory so they were kind of working class… But they weren’t intimidated.”

The Gate is the theatre in which he feels the most comfortable. “The people there are great, the staff are great,” Roe says. “I get a slight thrill every time the [stage] door slams behind me… You kind of feel like nobody can touch you. It’s a weird sensation, but it’s a very comforting sound. You just feel like you’re home.”

Roe also took up a role in Cartmell’s first production at the theatre, The Great Gatsby. It followed in the great Gate tradition of taking novels from ‘page to stage’. However, there was an original twist. The seats were taken out of the auditorium and replaced with a cocktail bar.

It was like going to a party in Gatsby’s mansion. “She literally took the seats out and changed the face of the theatre for eleven weeks,” he says. “A very significant gesture”.

Award-winning theatre director Oonagh Murphy was another big player in the Gate’s recent transformation. Between 2017 and 2020, she directed three plays here. Tribes by Nina Raine, Lucy Kirkwood’s The Children and a modern take on the Greek tragedy Medea too.

“We’re witnessing a sort of a shuffle that means new voices and new aesthetics are coming through,” she says of Ireland’s changing theatre scene.

The theatre has launched the careers of dozens of legendary actors – Orson Welles and Michael Gambon amongst them.

“With The Gate, there’s this massive history and working there you’re aware of that history. So many amazing artists have worked there. It has a sense of its own narrative as a building,” she adds.

Right now, she believes the staff here are doing a great job of speaking to the theatre’s rich history, while also introducing new voices – including hers.

Getting the balance right

Murphy, who has also done a lot of work in London, sees The Gate as a venue with enormous possibility. “There’s a sense of being able to direct plays that I wouldn’t have had the opportunity to do in other venues in Ireland,” she says.

For her, the theatre is striking the right balance between getting “bums on seats” and creating productions that say something about the world.

“It’s about that intersection where it can be work that’s made to a high standard with amazing production values and commercial success, but still has a real integrity and politics to it,” she explains. 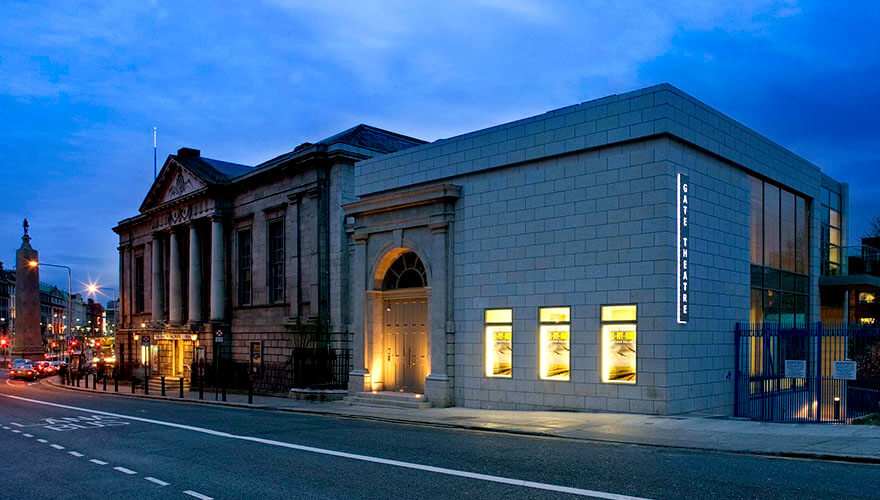 Image courtesy of The Gate Theatre

She also believes the team here is aware of the need to acknowledge the theatre’s grand past, while also involving the local community.

“Yes, this is a beautiful, very grand Georgian building. But it sits right within the centre of north Dublin city,” she says. “To hear the voices of people that you traditionally hear in that area and the voices of different ethnicities, I think we’re at the beginning of something potentially really radical.”

To check out the Gate’s upcoming programme, visit its website.

“The Abbey is your national theatre. We are here to tell your stories.” These were the words of Neil Murray, recently appointed alongside Graham McLaren as one of the Abbey’s new directors. And the Abbey itself has long been part of our city’s story. Nestled in the bustle at the heart of Dublin 1, amidst the comings and goings from Busaras and Connolly station, the Luas clangs past its door, and the Liffey’s squawking seagulls are within earshot. President Michael D Higgins regularly attends opening nights, a straight run for him down the quays from the big house in the park. The last t

The Book of Kells in Trinity is arguably Dublin’s most famous work of art, but what about all the famous Irish paintings and other international works of art in Dublin galleries? Here are ten of the major artworks hiding behind the doors you walk past every day. In the National Gallery of Ireland: With entrances on both Merrion Square and Clare Street, the National Gallery is the leading home of art in Dublin – and in Ireland. With the exception of some special exhibitions, admission is free for all. Here are just four of the masterpieces you can