The story of the plaque on George Bernard Shaw’s birth house on Synge Street offers a keen insight into Shaw’s relationship with his native country.

The proposed wording, “He gave his services to his country, unlimited, unstinted and without price” was rejected by Shaw as “a blazing lie.” The plaque now simply refers to him as “author of many plays”. Shaw’s small Synge Street home, where he lived an impoverished youth, is perhaps a symbol of our uncertainty about Shaw. Once a museum, it now stands empty, its fate uncertain – but often the people of a city create their own monuments.

Last December, the street artist Fink was working on a mural outside the Bernard Shaw pub when he was approached about a new commission, a mural for a wall on Synge Street. Fink could decide the subject but there was no question, “it’s the street of his birthplace so we just thought well, we’ve gotta go with Shaw,” he says.

Many people don’t go to galleries, whereas on the street you’re talking to a mass audience

In his colourful mural, ‘Thoughts’, Fink was keen to “visually represent his thought process, his creativity, from his mind to ours, through the quill…” And that beard. “He looks like a painter if you ask me, an old school painter…” 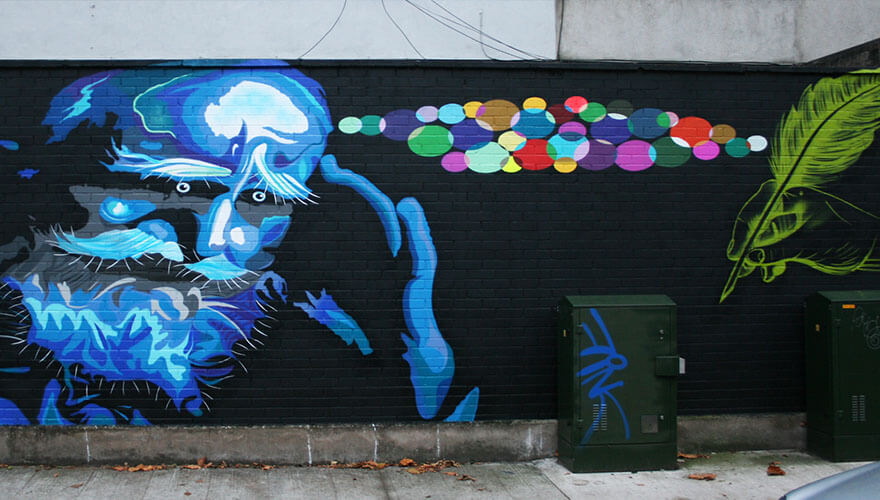 I tell Fink that Shaw had teenage ambitions to be a painter. In the National Gallery, beside a statue of Shaw are his own words, “You use a glass mirror to see your face, you use works of art to see your soul”. The Gallery was “the cherished asylum” of his boyhood. This seems to please Fink, “Art was my main thing growing up,” he says. “The only A I got in my Leaving Cert! I remember going to the Gallery in school over 25 years ago, those trips were an eye opener.”

Shaw believed in art that was purposeful, and so may have enjoyed the democracy of street art. “Many people don’t go to galleries, whereas on the street you’re talking to a mass audience.” Fink says.

‘Thoughts’ took Fink two days to complete, and he suffered for his art. “I practically got pneumonia. It was the beginning of December so after standing around for 8 hours I was just freezing. I don’t rush it… if you rush it, it can get polluted.”

Romantics may not want to know there was quite a utilitarian purpose behind the mural – a caretaker fed up of careless graffiti tags on that particular wall. “It seems to have worked so far, nobody has touched it.”

It seems a fitting application of the Shaw aphorism, “if you cannot get rid of the family skeleton, you may as well make it dance.”

In January, Fink was interviewed by Gabriel Byrne for an upcoming BBC/RTÉ documentary on the declining legacy of Shaw. I ask Nicholas Grene, Professor of English Literature at Trinity College, and author of Shaw: a Critical View, whether he believes the legacy of Shaw is fading. Grene believes Shaw’s theatrical legacy is very much secure in the English-speaking world. “There are a handful of plays that are old reliables… Last year, there was a Saint Joan up in Belfast, the Abbey has done a series of Shaw plays in recent times. He fits very comfortably in that sort of classic mode along with say Wilde.” 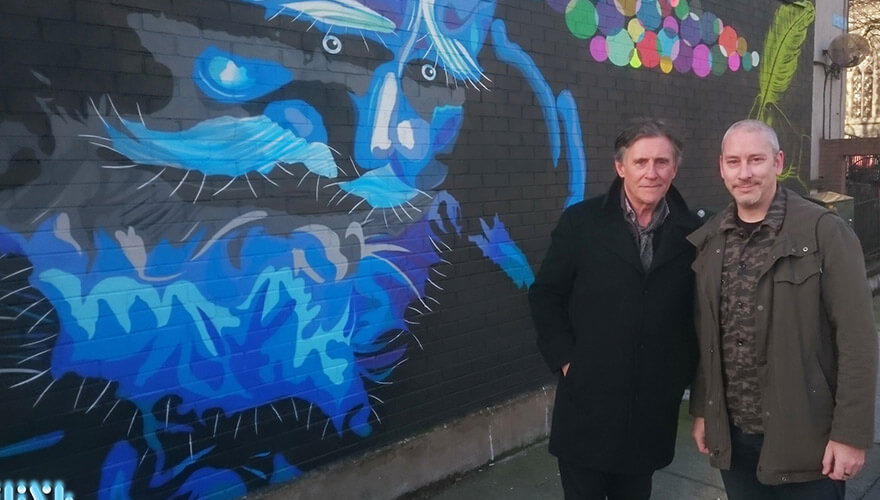 Why then does it feel that he isn’t held as dear to the Irish people? Grene believes Shaw isn’t identified in Ireland “to the extent that Wilde is. Wilde has been slightly adopted back partly because of [his mother] Esperanza, but also the gay dimension to it has made him a sort of icon. Shaw is very much associated with British politics, involved in the Labour Party there.”

Alongside that, “a lot of Shaw’s aphorisms and thought have been absorbed into the bloodstream. People don’t bother to remember that it was he who said such things as, ‘youth is wasted on the young’.”

He recalls the days before the Internet, “I was always being rung up in the English Department because some Minister was going to make a speech in Brussels and they wanted to know where and when Bernard Shaw said such and such…” Grene laughs.

His words are in our mouths and on our stage, and he has secured us some of the finest art

Grene agrees that Shaw had a difficult relationship with Ireland. “Ireland was provincialism. He was out to make his fortune in London. He didn’t return to Ireland for twenty years, even to attend his father’s funeral. And for an Irish man not to come to his father’s funeral is quite some statement.”

Shaw described his Dublin childhood as “rich only in dreams, and frightful and loveless in realities.” His father was a drinker. His mother took up with a flamboyant musician who moved in with the family. There was no money to send Shaw to university. He worked instead in an estate agent’s office.

All of this affected his relationship with Dublin, Grene says. “He talks particularly about the habit of derision that he picked up in Dublin… the begrudgery. I think he saw it in himself, but I think it was all associated with an impoverished lower middle class upbringing. He talks about himself as one of the ‘downstarts’, not one of the upstarts…” 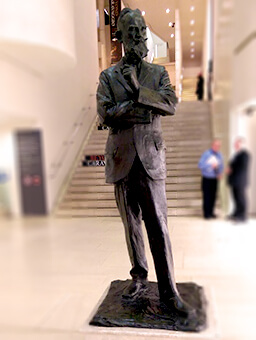 Shaw’s actions however tell a different story. His words are in our mouths and on our stage, and he has secured us some of the finest art. A statue of his tall thin frame greets you at the door of Dublin’s National Gallery, which continues to benefit from Shaw’s generous legacy; the royalties from Pygmalion and My Fair Lady have bought many of its finest pieces.

Shaw credited the Gallery with giving him “the training implements to make his living as a journalist in London because his first job was reviewer of painting…” say Grene.

He was also quite involved at the edges of Irish politics. “He had a good relationship with Lady Gregory… There is a whole collection of his writings about Ireland called ‘The Matter with Ireland’ and even though he was not a republican nationalist, he spoke up vigorously on behalf of the leaders of the Rising.” Indeed, when Roger Casement went on trial for treason in the aftermath, Shaw wrote a defence for him, a sort of play to convince the jury.

“He loved to have a finger in every pie and certainly Ireland was one of the pies that he liked to have his fingers in.” Grene says.

Grene believes however that Shaw’s theatrical home was London. “He was asked would he become a director of the Abbey after Synge died. And he said no because he felt that directors of the Abbey had really to be resident in Ireland. He was working very hard at the idea of setting up an English national theatre.”

There has been a move in recent times to repatriate Shaw as an Irish writer. “Look at any of those old posters they used to have of Irish writers, there he always was with his formidable beard and eyebrows.”

“He doesn’t come to mind in the way that Yeats, Synge, Joyce do…” but “he’s been a presence in Irish theatre right through the modern period. And there have been playwrights who have been unquestionably influenced by him; O’Casey stole the ending of Plough and the Stars from the ending of Heartbreak House.”

Grene ponders the possibility of Shaw’s market “coming up” but is unsure. Where Pygmalion once shocked the world with lines like “Not bloody likely!”, Shaw is now in a comfortable place as “a stable classic playwright. You can always get an audience in to see Pygmalion or You Never Can Tell.”

But Grene also recalls a time in the sixties when American scholars would come to Dublin to research Joyce and find that “no one knew a thing about Joyce in Dublin. So it may change.”

And wouldn’t that be loverly?

LGBTQ life in Dublin Dublin is a friendly and welcoming place for lesbian, gay, bisexual and transgender students. The city’s third-level institutions all have LGBTQ societies, while the city’s bars, restaurants and clubs are welcoming spaces. There’s no shortage of LGBT bars either. There’s The George, Pantibar and Street 66, for example. And the Dublin Pride Festival takes over the city every June. Support groups Growing up gay or bisexual can be tough. Being a young transgender person can be even harder. However, in recent years, Irela