Dublin is a friendly and welcoming place for lesbian, gay, bisexual and transgender students. The city’s third-level institutions all have LGBTQ societies, while the city’s bars, restaurants and clubs are welcoming spaces.

There’s no shortage of LGBT bars either. There’s The George, Pantibar and Street 66, for example. And the Dublin Pride Festival takes over the city every June.

Growing up gay or bisexual can be tough. Being a young transgender person can be even harder.

However, in recent years, Ireland has come on in leaps and bounds. Organisations like youth support group BeLonGTo and the Transgender Equality Network Ireland (TENI) have opened up spaces for people to come out at a younger and younger age.

In 2015, Ireland’s same-sex marriage referendum was passed by a landslide. And, the following year, Ireland passed some of the world’s most progressive legislation for transgender people.

There are still many issues of concern to Ireland’s LGBTQ community, including bullying in schools, the taboo around intersex people and the difficulties for trans people under 18 who want their gender identity recognised.

However, LGBTQ activists do feel that progress is being made. And much of it is coming from Ireland’s third-level institutions.

A warm welcome for LGBTQ students

For young people who grew up in the closet, or international students who come from countries where it is difficult or dangerous to come out, Ireland’s tolerant and accepting third-levels are one of the best places in the world to be.

Even smaller colleges have LGBTQ student societies, which serve as a place for people to meet up.

To provide readers with some first-hand experience, back in 2017, Dublin.ie spoke to three LGBTQ students about what life in Dublin is like for them. Here’s what they had to say:

“I was assigned to the female gender at birth, but came out as a man just before sixth year. My parents found it really hard to accept and I went to live with my aunt.

“It was hard for them to say goodbye to the girl they thought they had and to welcome the son they didn’t know they had but, with time, they came around and now we are close.

“School was hard, but college has been so much better. UCD had no problem recognising me as a man and accepting my name. Initially, I had not planned on telling anyone and didn’t think I would talk about it but, as I grew in confidence, I also realised that people here don’t mind what your gender identity or sexuality is.

People have found out because they’re friends with me and it was brought up – or they have seen my activism on Facebook.

People who may have been homophobic or transphobic before now know that Ireland is overwhelmingly supportive.

“The year of the marriage referendum, they had an on-campus referendum and it was passed by 97%, which shows what an accepting place it is.

“I’m not really involved with the LGBTQ society here and some of those societies could probably do a little more to include trans people. Although I know that UCD’s society has improved.

“UCD is a good college to go to… The only issue is picking what to do. There’s a cinema on campus, two gyms and a swimming pool, radio station, college papers and clubs and societies. The new law building is really impressive and even has a mock court.

“That said, I haven’t been as involved in campus life this year, as I’m busy with the Irish Trans Student Alliance, TENI and Trans*Action [magazine].

“Dublin has changed since the marriage referendum. People who may have been homophobic or transphobic before now know that Ireland is overwhelmingly supportive. It is a lot safer than some other places, so while there may still be the odd person who will make a negative comment, it is generally much more accepting.

“There is still work to be done for trans rights including recognition for under-18s and educating doctors about trans issues, but we are getting there.”

Jane D’Altuin: A second-year student of Computer Science and Irish at Trinity

“I’m from a town [in Kerry] where there was a girl’s school, a boy’s school and a co-educational, all-Irish school. One day, I was seen holding hands with a girl down the town and it was all anyone could talk about.

“From then on, I wasn’t exactly bullied, but I was excluded – especially by the other girls, who were afraid I would hit on them.

“When I got to college, I was still identifying as bisexual but, after two relationships with men, I realised I only liked women. And that’s when I realised that I was gay.

“I did expect that college would be better, because I had some older friends who had gone to Trinity and told me it was open and accepting, with a big LGBTQ society. And it has been.

“People here are really sound and I have made so many good friends, including straight women. The students in college have met LGBTQ people, so we’re not some weird abstract concept. They see us as real people and they see that we’re as normal or weird as anyone else. Barriers are being broken down.

Trinity is a really supportive place and we have a students’ union that is really invested in LGBTQ rights.

“Since getting here, I have been involved with an organisation called ShoutOut, which visits schools and gives anti-bullying workshops… aimed at making life better for young LGBTQ students.

“I really love student life. I’m the webmaster for Q Soc – the LGBTQ society – and am very involved behind the scenes with PhilSoc, the debating society. I am not really one for team sports, but I do like to go to the college gym.

I’m really lucky to live on campus, because I’m part of an Irish language residency scheme. My apartment overlooks the tennis courts.

“There is room for the lesbian scene in Dublin to grow. There are events, including a weekly meet-up at LGBTQ resource centre Outhouse on Capel Street and some club nights and events, but a lot of the gay spaces can be quite male-focused.

“All that said, there are a lot of positives in Dublin, including the fact that there are quite a lot of us. So you will encounter lesbians if you run in LGBTQ circles in college. And you will meet people going to events – they don’t have to be LGBTQ-specific events.

“Trinity is a really supportive place and we have a students’ union that is really invested in LGBTQ rights. College does perhaps tend to be a little more liberal and idealistic. And diversity is really appreciated here.”

Sean Frayne: A mature, first-year student of Community and Youth Work at Maynooth

Dubliner Sean is also a sexual health worker with BeLonGTo’s youth services and has served as the youth editor of the magazine Gay Community News. 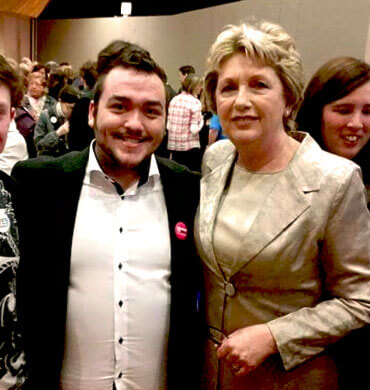 “I’ve been involved with BeLonGTo since I came out at the age of 19. I briefly studied journalism in a college of further education, but it wasn’t for me. So I dropped out.

“I got involved in youth work and, after doing the job for a few years, decided to go for the formal qualification.

“I second guessed myself a little, but everyone in the course is so supportive and there for you when the stress of exam time hits.

“Since I came here, I have felt that I’m accepted for who I am. Being a mature student, perhaps more than being gay, has helped me to have more insight about myself.

“Coming out is a lifelong process and something to be considered when you meet any new people. I know some gay people who try to act more butch when they meet new people, but I actually prefer to camp it up so that the question of my sexuality is answered straight away.

A lot of my friends are happy to hold hands in public with their same-sex partner, but I don’t always feel safe to do so.

“I don’t feel I have been treated any differently because of my sexuality. There is one man on my course who is a born-again Christian and he had his own ideologies before he met me. However, as he got to know me, he sees that it is just one part of my identity. And we get on very well.

“It does get better for LGBTQ people in college, but this frustrates me somewhat. Why shouldn’t it be better now? LGBTQ people do still face homophobic and transphobic slurs. A lot of my friends are happy to hold hands in public with their same-sex partner, but I don’t always feel safe to do so.

“When the marriage referendum passed, I went home and found my mam had hung out rainbow Pride flags. The older generation are more accepting than they get credit for. My mam is my window to how much Dublin has changed and how much it has grown.

“Although I might not hold hands with my boyfriend in Dublin, I don’t have any issue being who I am in the city.”

For more information on how the city is changing for the better, read our guide to diversity in Dublin.

Secondary school is a time to hang out with your friends, do some study and grow as a person. But two teenage sisters at Loreto College on Stephen’s Green in Dublin have also found the time to found and develop Fenu Health, a thriving, multi-award winning equine health business with a worldwide customer base. Annie and Kate Madden, aged 15 and 16, are the eldest of four children. Annie is in third year and Kate is in fifth year. They live in Summerhill, Co Meath, with their parents and younger brother and sister. “We grew up with horses for sport, not business, and we’ve been riding since we