Grand Canal Dock is home to more than just the tech companies it’s famous for. That dark grey contemporary building with unusual green bubbles on the front is The Lir – Ireland’s National Academy of Dramatic Art.

Its courses are developed in association with London’s Royal Academy of Dramatic Art (RADA) and its reputation is enviable. Acting is not for the faint hearted though; it takes a certain type of determination and passion. “It’s…satisfying to me, going through a script and having to do it night and night again. Every moment is live and there is no second take”, explains final year acting student, Damian Gildea.

Dublin.ie: Why did you decide to study acting in college?
Damian: I’m from Sligo originally, and moved to Dublin a few years ago. There wasn’t too much back in the Sligo theatre scene when I was younger. I always thought acting would be something I’d love to try. I didn’t know what it was, how to do it, or what route I’d have to take. I actually moved to Dublin to study maths in Trinity. I saw a couple of plays and met a few different people up here and it became something I started learning. I did maths for one year, and then decided I wanted to be an actor. I started by doing the introduction course here and did a few small amateur plays. I only started acting, maybe 3 or 4 months before I applied here. I just kind of made the decision and trusted my instincts.

The accent and voice coaches here are brilliant. It’s not only about copying, you have to understand how to use your mouth to produce vowels, consonants, different rhythms

Dublin.ie: Is The Lir a private college? How do you get in?
Damian: It’s actually an extension of Trinity. It was opened in association with The Royal Academy of Dramatic Art (RADA) in London. You get a Trinity degree when you graduate. It’s not private, it’s the same fees as general courses out there. There are three rounds of auditions, then they have an interview. I think over 1,000 people applied, 16 got in – 8 boys and 8 girls. 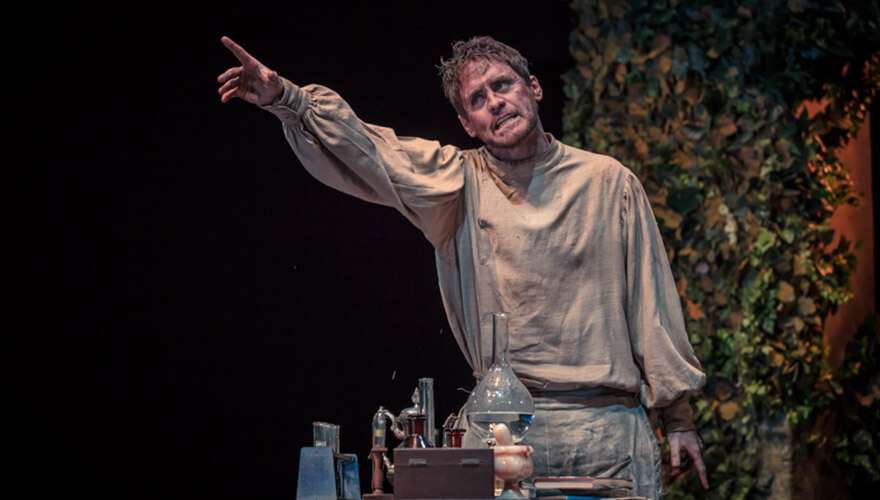 Dublin.ie: Do you learn how to do different accents?
Damian: In first and second year, you go through the basics: standard English, Irish, Northern American and then you go into maybe Scottish, London, Liverpool and Manchester. Ones that would be used quite regularly for shows. The accent and voice coaches here are brilliant. It’s not only about copying, you have to understand how to use your mouth to produce vowels, consonants, different rhythms – that’s how you transfer accents, rather than imitating.

Dublin.ie: Do you learn acting for stage or television?
Damian: It’s predominantly a theatre course, and in second year we go into more on camera stuff, but it’s mostly plays. I’d like to do a few years of theatre. It’s not where the money is, but it’s more satisfying to me, going through a script and having to do it night and night again. Every moment is live and there is no second take. I like having that challenge, that extended period of time that you have to be on stage. Television, it’s a different craft. It has its own difficulties. It’s much closer, so it has to be more subtle. You can’t drop it for any moment on TV, because they see every iota of what is going on in your face. You can’t do theatre on television and you can’t do television acting in theatre. You have to understand where they cross over, in order for it to make sense.

Sometimes the character that you wouldn’t have thought of at all actually really suits you. Maybe because it’s further away from who you are as a person.

Dublin.ie: What is the theatre scene like in Dublin, in terms of work?
Damian: There are a lot of good actors in Dublin but it’s a tough industry. There are a few main theatres like the Abbey, the Gate, the Project, the New Theatre and some smaller ones. For the volume of actors that are around, there is not enough work to sustain it, and there are only a handful of actors who work regularly. It’s important when you get out that you keep working, keep developing, so when the opportunities come you can take them. 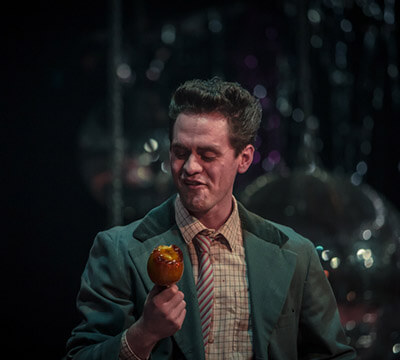 Damian plays the character ‘Sweets’ in Mojo, a play by The Lir – Image courtesy of Keith Dixon Photography

Dublin.ie: Do you have a type of character that you enjoy playing?
Damian: When you come into The Lir, you think you might have an idea of what you would like to play or who you might be like – from watching your favourite character. Sometimes the character that you wouldn’t have thought of at all actually really suits you. Maybe because it’s further away from who you are as a person. It’s sometimes easier to do something completely different than closer to you. You may find it difficult to divide the difference between two people who are similar to you. They concentrate on versatility here in The Lir. They throw you into things that suit you and things that don’t suit you at all. You work on the things you are good at but also on every other aspect.

Dublin.ie: Did you ever have to do an awkward scene, like kiss someone on stage?
Damian: Not particularly, you don’t react in that kind of way. We know why we’re here, it’s nearly like a different breed of people. We understand that it’s an art, a craft and we’re telling a story. It’s not like I’m kissing my classmate, because it never really is that. Maybe when you come into first year, you’re more self-conscious, meeting new people and you slowly start coming out of yourself. Movement and physical theatre classes help with all of those things. At this stage in third year, it’s professional and it’s our job.

Dublin.ie: Do you ever get so into a character that you forget yourself when you’re off stage?
Damian: In the run up to a show, we have a lot of rehearsals on Saturdays. Sunday is your comedown day. Your head is still in the scenes, because you’re in the rehearsal process and it’s hard to get away from it. At the same time, we love to be there. If you’re playing someone you really like, you’re researching them at the start and you can find it hard to let go. You want to find out exactly who this person is. You might love everything about one character, and could be frustrated by another. That’s one thing I love about doing this, every play and every character is different.

What sets Dublin’s top culinary arts school apart? TU Dublin’s School of Culinary Arts and Food Technology, which was once based on Cathal Brugha Street but is now located on its new Grangegorman campus, has been blazing trails for over 80 years. Dublin.ie met with the Head and Assistant Head of the school, Dr. Frank Cullen and Mike O’Connor, to find out what sets their culinary school apart and what the move to a centralised campus at Grangegorman has meant for its students. An 80-year-old institution The Culinary Arts School first ope

One American’s experience of studying in Dublin Ben Campbell Rosbrook is originally from Syracuse in upstate New York. After completing his undergraduate at a college in Vermont, he came to Ireland to do his Masters degree at Trinity College Dublin. That was back in 2016, but today he still lives in Dublin where he works as a commercial analyst. After Ben had been living in Dublin for a few months, Dublin.ie spoke to him about his experience of studying in the city. So what brought him to Dublin? Student life from an American’s perspective “I’m spending like half or a