The School of Culinary Arts, DIT Cathal Brugha Street has been blazing trails for almost 80 years. Dublin.ie met with the Head and Assistant Head of the school, Dr Frank Cullen and Mike J. O Connor to find out what sets Cathal Brugha Street apart and what the future and the move to DIT’s new centralised campus at Grangegorman hold.

The School opened its doors in June 1941 as Saint Mary’s College of Domestic Science. In the 1950s the college changed to cater to the needs of a growing tourism industry, becoming the Dublin College of Catering. In the 1990s Cathal Brugha Street became the first culinary college to offer a degree in Culinary Arts with cooking as a core module for all four years. And to this day it is the largest culinary school in Europe.

The school is still often seen as the ‘catering college’ but in reality it offers much more. The school is constantly looking forward, anticipating the needs of the industry that its graduates will enter.

In the 2000s they recognised that their students needed a more rounded education. “We have an ethos of liberal vocational education. Culinary skills and business go hand in hand…” Frank says.

So, they expanded their offering. Cathal Brugha Street now offers courses from Level 6 all the way up to PhD including everything from a Higher certificate in Food Sales and Culinary Practise to a BA in Culinary Entrepreneurship to an MSc in Culinary Innovation and Food Product Development. 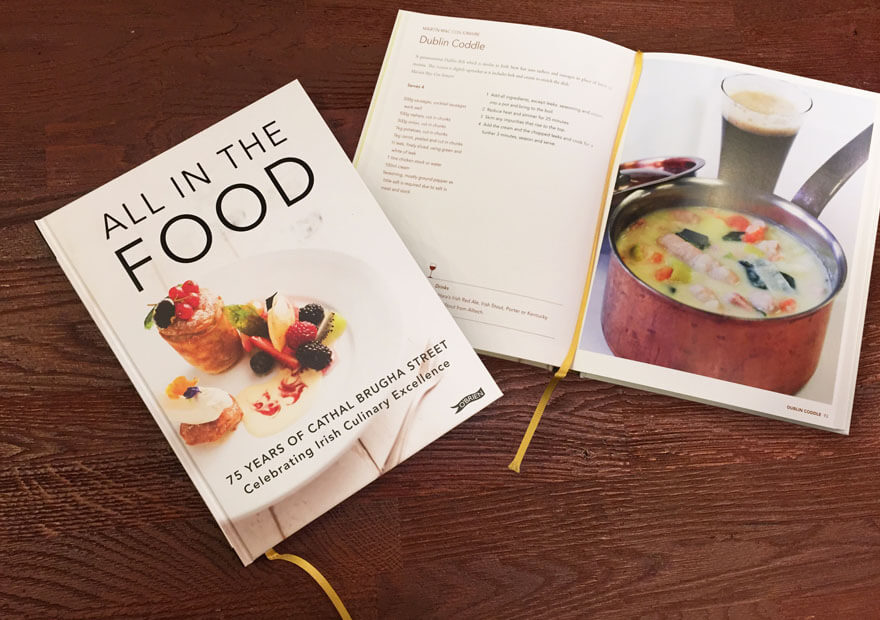 A celebration of contemporary Irish cooking from Cathal Brugha Street.

“We’ve done this so that when students leave here they don’t only feel that they have gotten an education, they have formed connections; a lifelong connection with the school but also a connection to the industry.”

The school is renowned for producing sought-after graduates and this is in large part down to the school’s links with the culinary industry. The links provide produce for the students to cook with, monetary support and even scholarships and support for students to travel and compete abroad.

The quality of the students of Cathal Brugha Street is world-renowned. Many of them contributed to a book celebrating the school’s 75th anniversary in 2016. Graduates Darina Allen, Richard Corrigan and Kevin Thornton were happy to have their recipes featured in the book. That internationally recognised chefs such as Michel Roux Snr. also contributed reinforces the gleaming reputation that the school and its students have in the industry worldwide.

This sense of giving something back is embedded in the ethos of the school. “It’s almost like a family”, Frank says. For 30-odd years the school has organised a free Christmas dinner for senior citizens in the local community. “The tickets go faster than a U2 gig”, Frank says with a laugh.

In recent years the school – with the help of corporate sponsors – has been giving homeless people training in culinary skills and then helping to get them jobs in the industry. Frank is also very enthusiastic about a project to eliminate food waste by donating all produce not consumed or sold to local charities.

The next step for The School is a move from their home at Cathal Brugha Street to DIT’s campus at Grangegorman. For both Frank and Mike this means a move to a premises that will be reflective of the school’s reputation.

While Cathal Brugha Street is the ancestral home of the school it is no longer fit for the volume of students the courses have. “We have ten kitchens and two bakeries but they’re all different sizes. They weren’t originally built for the purposes we use them for today”, says Frank. The move will increase the school’s capacity by 20%.

The new campus will boast two restaurants, eleven kitchens (three pastry kitchens, two bakeries, five hot kitchens and a product development kitchen), a sensory lab, a wine tasting lab and a bar, all kitted out with state of the art equipment. “When we move we would like to carry our reputation with us and I believe we will but”, says Frank, “we will now have a state of the art campus to match it”.

Professor Aoife McLysaght is Principal Investigator in the Molecular Evolutionary Laboratory and Lecturer in Genetics, TCD. The thing that I find interesting and exciting: new ideas and trying to figure them out. And that works better when you’ve got somebody to talk about it with. You learn from the experience of working with people who are really good. And even though I’m now a Professor in Genetics at Trinity I still feel that this still goes on, that I learn from other people and I really enjoy the interactions that I have. That’s the difference between doing whatever it is you do at home at a desk

Ireland might be a small country, but our universities, institutes of technologies and colleges are incredibly diverse. Every year, tens of thousands of students from over 130 countries come here to study. Dublin, home to about 1.2 million people – and growing – is the destination of choice for the majority. Drawn by the city’s high-quality education offering and the possibility of securing a part-time job in one of the major tech firms with a Dublin base, including Google and Am

We sat down with Professor Philip Nolan, president of Maynooth University, to discuss his plans for the university, which lies on the periphery of Dublin. His role focuses on creating a strategy and implementing this to grow and develop the university. Maynooth University is home to over 1,000 staff and 13,000 students, and more than 1,200 of these are international students hailing from over 60 countries. The university offers a wide range of excellent academic programmes which are delivered by leading researchers in various fields, and students are challenged and encouraged to reach their full potential in this top-class learning environment. C