Many come through the EU-funded Erasmus exchange programme, which gives students the chance to study or intern abroad for up to 12 months. The 2018/2019 academic year saw 8,463 European students come to Ireland as part of the programme.

It is accessible to Dublin, which is such a fun city.

Dublin, home to about 1.4 million people – and growing – is the destination of choice for the majority. (UCD and Trinity College Dublin were among the top three institutions of choice for Erasmus students.)

Drawn by the city’s high-quality education offering and the possibility of securing a part-time job at one of the many major tech firms with a Dublin base. Students who come here consistently say that the city is friendly and welcoming.

Today, international students are making a big mark across Dublin’s campuses. Indian student societies organise events such as Holi, Chinese students bring their unique New Year festivities to their Irish classmates and African students, among others, giving Irish universities and colleges a flavour of their diversity.

I wanted to… make sure that other students had as good an Erasmus experience as I did.

We spoke to two students involved in international student societies about what visitors and newcomers to Dublin can expect.

Pierre Texier was born in Dublin to an Irish mother and a French father. He moved to France with his family when he was nine. Then, at the age of 18, he returned to study at Maynooth University.

In 2018, he was in his final year of a BA degree, studying Spanish and anthropology. That’s when Dublin.ie spoke to him about his experiences as a student in Dublin.

“I went on Erasmus for a year to Alicante, Spain,” he says. “The Erasmus Student Network there organised events and trips for students to meet each other and discover Spain. It really helped us. So, when I came back to Ireland, I wanted to give something back and make sure that other students had as good an Erasmus experience as I did.”

Most of the organising committee are Irish students who went abroad and came back.

The Erasmus Student Network in Ireland has branches in Maynooth University, UCD, DCU and Dundalk IT. However, as Texier explains, the society isn’t just for European students.

“We meet students from all around the world. Most of the organising committee are Irish students who went abroad and came back. Although we do have an Erasmus representative and international representative from outside of Europe,” he says. “We have a lot of Americans and Germans, as well as some from Spain, France, Slovenia, India, China, Canada and Japan.” 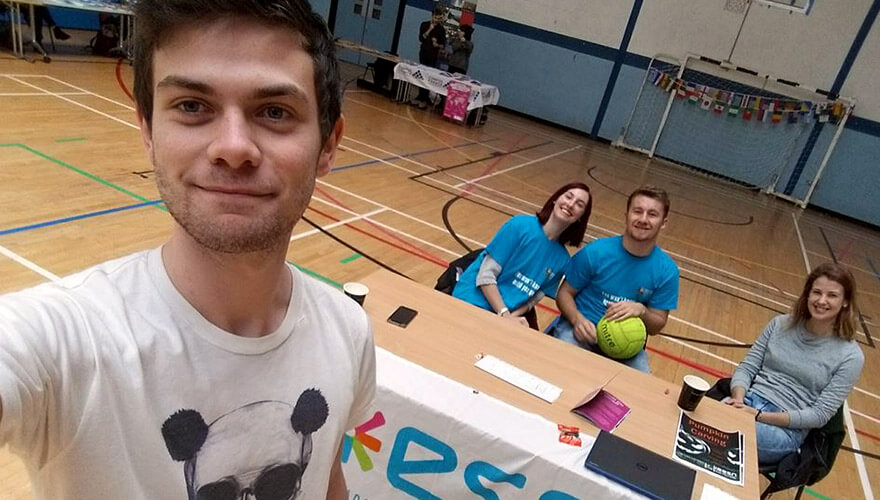 Erasmus Student Network Maynooth has organised trips to Belfast and Kerry – a world-famous tourist destination about four hours from Dublin. It regularly holds social nights and fundraisers too.

“Irish students come to these events to meet people from all over the world. The international students all say that Irish people are very friendly and welcoming,” says Texier. “They really like it here in Maynooth. Even though it’s only a small town, it is very accessible to Dublin, which is such a fun city.”

International students also like the variety of clubs and societies on offer.

He adds: “International students also like the variety of clubs and societies on offer at Maynooth and they tell us that it is easy to make friends here.”

Erasmus Student Network members also gain access to a range of student discounts, including cheaper Ryanair flights. Plus, they’re part of a network of over 500 organisations across Europe. (You can view them all on the ESN website.)

Tia Zhang came to Ireland for the first time as a teenager. She then spent three years at an Irish secondary school before attending Trinity College to learn Management Science and Information Systems Studies. When Dublin.ie spoke to her in 2018, she was also president of the Chinese society – which has over 350 members.

“We run events to help Chinese students integrate into Irish culture,” Zhang explains. “We promote Chinese culture around campus. Then, we organise the mid-autumn festival, as well as Chinese New Year, which are events where Chinese internationals can celebrate traditional events together with Irish students.”

“Essentially, we are a bridge between Chinese and Irish cultures.

Zhang has also organised a road trip to county Kerry, where Chinese international students had a chance to learn about Irish culture and heritage.

“Essentially, we are a bridge between Chinese and Irish cultures,” she says. “We provide authentic Chinese snacks at our events and have tea tastings, as well as movie nights – sometimes in collaboration with other societies such as Trinity Animation Society. Recently, we screened The Rise of the Monkey King.”

Zhang says that the language barrier can be a challenge for international students. To address this, the society organises Mandarin and other dialect classes, where Chinese students can volunteer and prepare a presentation on the language of their region to teach Irish students a little more.

And, of course, if Chinese students ever feel down about their English-speaking ability, the society offers a network of support and advice from their fellow Chinese citizens.

Chinese students tell me that Irish student societies are different from those in China.

“That said, Chinese students tell me that Irish student societies are different from those in China,” says Zhang. “Here, they’re about socialising and making new friends. Whereas, in China, it’s more about learning a particular skill, such as piano in the Piano Society.”

However, this difference can prove beneficial for international students. “When they come to these events in Ireland, they get to meet new people and expand their social circle,” says Zhang.

If you come to Dublin, what sort of international student societies can you find? We’ve put together a selection of the main groups:

A pathfinder for Brazilians coming to Dublin Ed Giansante – aka Edu or Eduardo Giansante – left Sao Paulo for Dublin in 2008 with the hope of learning English and making a new start in Ireland. Initially, he lived with a host family in a Dublin suburb and went to an English language school near Mountjoy Square. Since then, his English, his career and his following have all come a long way. From boom, to bust, to blogging Ed’s timing was both good and bad. Upon his arrival in 2008, Ireland’s economy had hit a massive recession and the country was facing into a period of austerity. It would be hard for a native to survive in

UCD Global: Welcoming international staff and students With a huge urban campus, state-of-the-art facilities and the largest student body of any university in Ireland, UCD welcomes hundreds of new international students every year and contributes significantly to Dublin’s diversity. UCD prides itself on being Ireland’s global university. And it has international campuses and strong links to academic institutions in locations as far-flung as Beijing and M