Huddling together in the bitter cold, on Friday the 13th, under a weak and feeble January sun, they all argue that there’s nothing better. Sure, there’s dramatic stories of nearly dying, but the group is adamant that the buzz is worth it.

Great, they say, for the mental health. “It’s the perfect anti-depressant,” photographer Barry Delaney says. Listening to these Dublin swimmers, you hear the language of addiction, love and even religion.

Welcome to Sandycove’s famous Forty Foot and its crew of year-round swimmers. It’s almost like a cult. However, the freezing water keeps things very real.

The Forty Foot is located along the south shore of Dublin Bay, near Dún Laoghaire harbour. The small beach is just a short walk from the Sandycove DART station and the James Joyce Tower, where the opening scenes of Ulysses took place.

Joyce’s character Buck Mulligan even decides to head to the Forty Foot to take a dip in the “the snotgreen sea, the scrotumtightening” Irish sea.

But this beautiful bathing spot long predates even Joyce’s 100-year-old novel. The Forty Foot has been popular with Dubliners for around 250 years. Although, it was only 50 years ago that women began to make their presence felt.

I didn’t miss a single day last year. I would feel absolutely guilty if I did.

For decades, hundreds of Dubliners have also gathered here for a traditional Christmas day swim. More recently, famous faces like Matt Damon have even made an appearance – much to the delight of locals. However, these are the Forty Foot’s hardcore, dedicated daily swimmers. 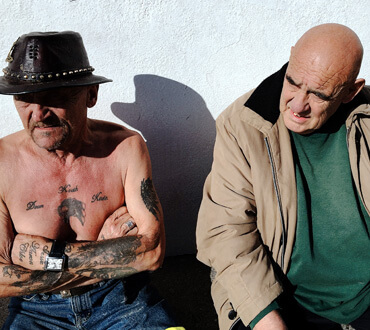 Swimmers from all walks of life. Photo by Barry Delaney

And there’s no mistaking their sense of community. Of camaraderie, wit and banter. “It’s like a great pub,” Barry says.

Indeed, a few of the swimmers say they were a little too fond of the booze in their day. Here it seems they’ve found nature’s 12 steps, but get to the last step here and you still have to dive into the freezing sea.

“Yeah it’s an addiction with me,” Peter Brady says of his 30-year habit. “I didn’t miss a single day last year. I’d feel absolutely guilty if I did. I am retired. It’s something to do and there’s always a bit of fun,” he says.

Much more than a recreational activity

Photographer Barry Delaney’s ocean journey started when he was struggling to give up drink. He had been shooting swimmers. And was intrigued. “I thought maybe I’ll give it a go.”

And he did. And felt better for it. “I found it helped me deal with all the stuff that is going on in my head,” he says.

Barry lives just two minutes from the sea. So for him, it’s nature’s caffeine and therapy all in one. He gets up. He dives in. “Then it’s yeah, let’s go, let’s face the day,” he says. 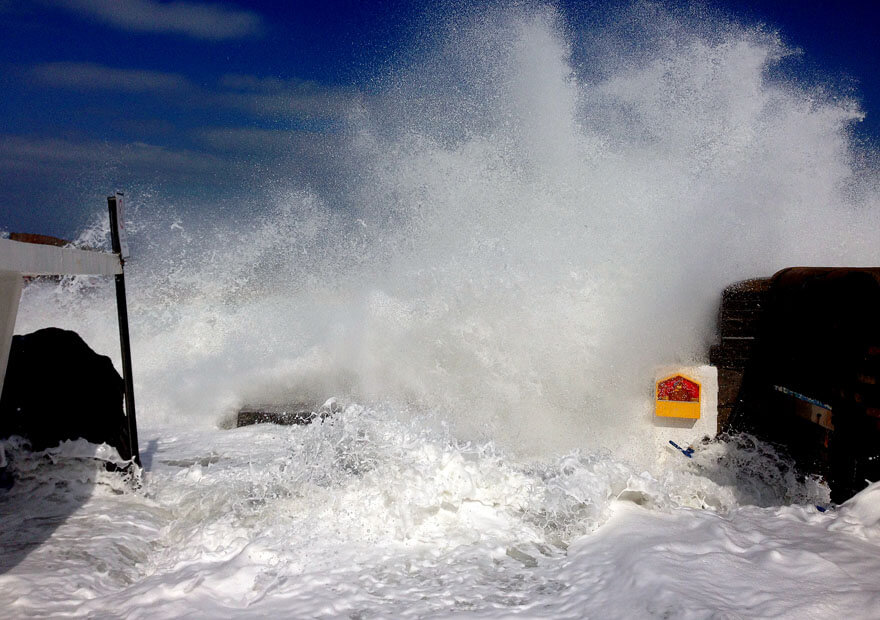 A Rough Day at the 40 ft. Photo by Barry Delaney

Artist Gary Coyle’s ocean plunge ended up with him making quite a splash on the international art scene. “I didn’t start swimming for artistic reasons,” he says. However, he would be out there and would suddenly find himself awestruck. So he started to shoot while he swam, documenting his daily pilgrimage.

Notebooks, DART tickets, ear plugs all formed part of his first exhibition of sea photos. He even sold a number of signed jars of Forty Foot water: a sure sign of ‘making it’ in the art world!

Laughing he says: “Yeah, I suppose it’s a profession as well as a recreation.”

“I’ve had loads of shows,” he says, modestly. “I have a show touring the UK at the moment and I’m in a big show in the US next month. I never intended it to become art, let alone take over my life,” he says adamantly. “Talk about mission creep”. It’s an excellent antidote to stress though. “It’s fucking incredible, I just feel amazingly good afterwards.”

Close calls at the Forty Foot

It’s not without its perils though. Barry says he was out before Christmas on a rough day and he saw a swell coming. He swam furiously towards the steps, but didn’t quite make it. “I got spun around the railing, caught in what they call a ‘washing machine’. It was like a whirlpool. I thought ‘that’s it’.”

You get a false sense of security on glorious days. And you think I’ll go just go a little further…

He said he had gone in with a head full of financial woes. Then, when he finally managed to get out, his priorities were quite different.

Gary too had his scary tales. “You get a false sense of security on glorious days. And you think I’ll go just go a little further and further. And then suddenly you realise ‘Jesus I’ve gone way too far’.” 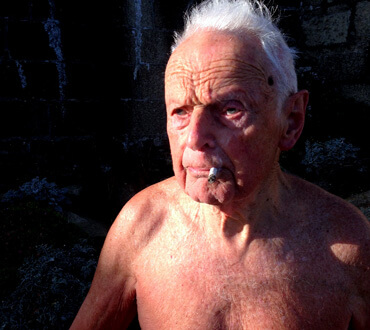 Redmond is 90 years of age and still swimming. Photo by Barry Delaney

Staying calm and “luck” are what saved the day for him. Gary also really enjoys the social aspect. “There’s all walks of life. All different backgrounds and ages. Taking your clothes off too is a great leveller. A really good bar is an apt description,” he says.

It seems the only unruly customers are the seals. People are feeding them so they are coming in close to shore. “The alpha male is huge. Jesus Christ he is huge. And he will head-butt you. I don’t know if it’s play or not but it’s terrifying,” Gary says. “He’s the size of a small cow. And he pops up looking at you. No fun!”.

Despite it all, everyone says it’s well worth it. So if you want a taste of the fabled wit, banter and camaraderie of Dublin pubs but don’t want to drink, try a trip out to the Forty Foot. And if you balk at jumping into the Baltic waters, then just sit back and enjoy the company and, of course, the stunning views of Dublin Bay. A great way to spend a day.

Want to discover more Dublin beauty spots? Check out our introduction to the city’s coastline and mountains.

Walk half way down the South Wall pier at Poolbeg and you’ll quickly realise you are somewhere very different. For one, you’re a good bit away from land. Could anyone hear you scream out here? Perhaps, but that’s a very strong wind. As you look out to sea, waves brutally crash into the wall on one side, while Dublin harbour gentle laps at the other. It can seem surreal at times. Turn around and there’s a stunning view of both Dublin’s north and south side. It’s at this point you realise how rare it is to see both sides of this bizarre city together, side by side. It’s here that the “Moonmen” do what they love. Meet Dublin’s Half Moon s