Walk half way down the South Wall pier at Poolbeg and you’ll quickly realise you are somewhere very different. For one, you’re a good bit away from land. Could anyone hear you scream out here? Perhaps, but that’s a very strong wind.

As you look out to sea, waves brutally crash into the wall on one side, while Dublin harbour gentle laps at the other. It can seem surreal at times.

Turn around and there’s a stunning view of both Dublin’s north and south side. It’s at this point you realise how rare it is to see both sides of this bizarre city together, side by side. It’s here that the “Moonmen” do what they love.

We should probably stop calling them Moonmen. They are actually the members of the Half Moon Swimming and Water Polo Club. Though it’s really more fun to call them Moonmen. 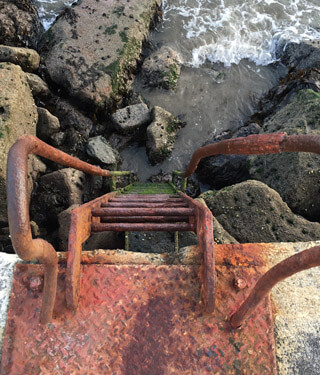 That’s because it implies some sort of madness, lunacy. Do they like their cosmic nickname? “It’s a bit of a badge,” says Gerry.

Gerry Dunne is helping us unlock the mystery of the Half Moon Club. Gerry also just happens to be a Paralympic champion swimmer. And he’s got the medals to show for it. He’s been a Moonman almost as long as he can remember too. He might even have gills.

Maybe madness and lunacy figure in the whole package. I mean who would be crazy enough to go swimming in a freezing cold Dublin Bay all year round? Well, the Moonmen have been doing it quite a while.

Where did the name come from?

The Half Moon Swimming and Water Polo Club was founded back in 1898. The name comes from its clubhouse here on the South Wall.

In a previous life, it was home to a British army gun battery. Built in the 18th century, the gun turret was mounted in a half moon shape so it could protect the entire entrance to Dublin Port.

Today, the clubhouse is a bit of a cabin-like structure that you could almost miss if you weren’t out to find it. You go down the ladder on the side and, there you go, you’re swimming in Dublin bay.

…I’d simply uncovered a secret spot the Moonmen savour as their own.

The nickname for the club’s members, on the other hand, is more recent. It comes in part from the 1965 short film “Moonmen” by Kieran Hickey. It was his first – and it’s a must see. You can almost smell the sea air as you watch it.

The conversations between the sea swimmers are great too. Gerry hasn’t watched the whole thing, but he’s got a connection to it. One of the swimmers in the footage is his uncle, Ben Kealy. And Gerry says not much has changed at the club since the documentary was made – just the names and faces.

A constant presence in a fast-changing city

The film is very much of its time, yet there is something timeless about it. The world presented in the footage is very different from ours. Some of the locations will certainly be familiar: St Patrick’s Church in Ringsend and what looks like The Oarsman pub. However, there’s no redeveloped docklands, no Airbnb, no Google. It’s a very different Dublin.

Gerry calls the place a hidden gem and promptly asks how we found the club – almost as if we weren’t meant to. Maybe I’d uncovered some sort of crime ring… Nope. I’d simply uncovered a secret spot the Moonmen savour as their own.

Gerry tells me about hours and hours spent swimming here on long, hot summer days. He tells me about proposing to his wife here too – and how every member brings friends and girlfriends out to show off this particular spot that they call their own. 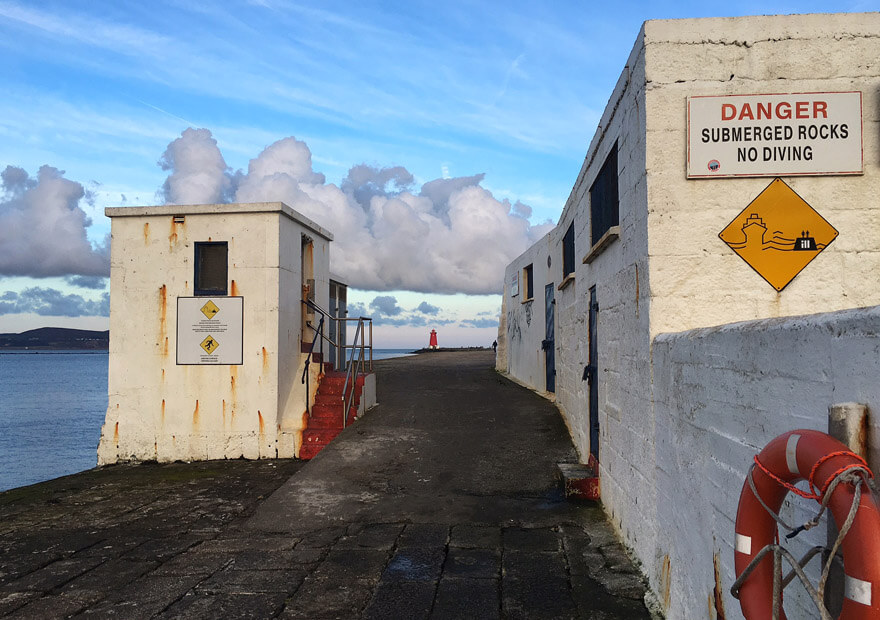 What does the future hold for the Moonmen?

Despite water quality issues and pandemic lockdowns, the club continues to grow more than a century after it was founded.

There may be less focus on the sea swimming they’re known for, but there’s been very strong numbers for water polo. They regularly practice at pools in Rathmines and UCD. The pandemic also seems to have brought people back to the salty water by the South Wall.

And, much like the swimmers at Sandycove’s Forty Foot, the club’s hardcore members brave the water on Christmas day – as per tradition. I’m even told there’s still the mad faithful who make it down for a dip at the old spot each and every Sunday.

Dublin is blessed with beautiful seaside spots and I strongly suggest checking this one out. You could even go for a dip. Because, who knows, maybe you too have what it takes to be a Moonman.

To find out more about the Half Moon swimming club, visit its Facebook page or go for a stroll down the South Wall to check it out for yourself.

Hiking for women who want to connect with nature We caught up with Melissa McDermott – Galz Gone Wild founder – and Ruth Farrell to find out about the group of women who escape the city to find some scenic hush in the Wicklow mountains. Creating a supportive community of women Mel founded Galz Gone Wild in 2017 after moving home from London. She found herself lacking direction, and she was unsure of her next step. She started to hike to clear her head, but the hiking communities she found were mostly male and older. They were hiking for different reasons. “There is a community there, but it’s very much about getting from point A to point B, as quick

It’s an addiction. It’s life threatening. It’s awesome. Huddling together in the bitter cold, on Friday the 13th, under a weak and feeble January sun, they all argue that there’s nothing better. Sure, there’s dramatic stories of nearly dying, but the group is adamant that the buzz is worth it. Great, they say, for the mental health. “It’s the perfect anti-depressant,” photographer Barry Delaney says. Listening to these Dublin swimmers, you hear the language of addiction, love and even religion. The perpetual appeal of Dublin’s Forty Foot Welcome to Sandycove’s famous Forty Foot and its crew of year-round swimmers.