What to do in Dublin this summer

On a summer day in Dublin city, there’s no danger of being bored.

Indeed, for a relatively small city (by international standards), there’s always something to do, and this is remarked on by most visitors to the city. Yes, there are tourist attractions worth checking out: the Guinness Storehouse, Trinity College and the Book of Kells, the National Gallery, the Natural History Museum and Christchurch Cathedral are all worth a look, but Dublin really comes alive through its people and its culture.

Between theatre, live music, art exhibitions and installations, talks and workshops, comedy and family-friendly events happening Monday to Sunday, right through the year – and mostly organised and led by the citizens of the capital themselves – there are plenty of options in this seaside city built on the river and the canals.

We’ve put together some of the big highlights to check out for the spring and summer of 2018. 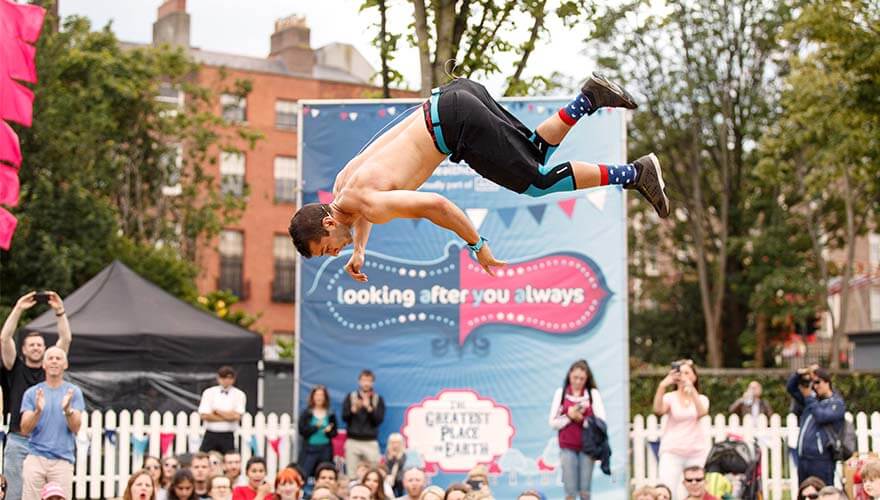 Fake @ The Science Gallery, until May 24th
The first Science Gallery – a unique interactive space bringing together science, art and ideas – opened in Dublin, and it’s an idea that has proven infectious, spreading to cities around the world. This exhibition explores the theme of authenticity by looking at chemical signatures, copyrights, DNA, forgeries and patents.

Musictown, April 13th – 22nd
Dublin has always punched above its weight when it comes to finding international talent: U2, The Script, Thin Lizzy, Sinéad O’Connor, Villagers… to name but a few. This festival will celebrate the city’s musical heritage with concerts, choirs, DJs, master classes, collaborations, workshops, producers and visual artists across a range of genres. Brought to you by Dublin City Council in association with Aiken Promotions.

Dublin Dance Festival, May 2nd – 20th
Watch artists and choreographers from around the world perform Contemporary Dance in a variety of venues around the city. Master classes and dance films form a part of the programme. Don’t miss one of the big highlights: The Top 8 Street Dance Battle will feature the best dance contestants from the previous qualifying heats, with a mix of styles including hip-hop and break dance.

Dublin Gay Theatre Festival, May 7th – 20th
The largest event of its type in the world. This features drama, comedy, music, cabaret and more. There’s also a festival club every night after the evening shows in popular and well-known LGBTI and LGBTI-friendly bars including Pantibar, The George and Street66.
See also: Dublin Pride, a celebration of LGBTI history and culture running from June 21st – 30th, including the highlight: the Pride Parade.

Bloom, May 31st – June 4th
This hugely popular garden festival, set in the Phoenix Park – the largest public park in any European capital – has gone from strength to strength. As well as gardens, horticulture and design, there’s also a chance to try new foods from some of Ireland’s top food producers at the food village. It’s a family-friendly day with science labs, book clinics and little gardening activities for the smallies. This year, there’s an exciting new addition: Bloom Fringe will see pop-up forests and street art transforming concrete spaces into green havens, and there will also be pop-up workshops, installations, open days and foraged food.

Forbidden Fruit, June 2nd – 4th
Taking place over the June Bank Holiday weekend, this music and arts festival kicks off in the heart of the city centre. There’s plenty to look forward to, including sets from Grizzly Bear, The War on Drugs, Richie Hawtin and Glass Animals, plus a DJ set from actor and musician Idris Elba. On June 6 at the same venue, Nick Cave and the Bad Seeds play a show, supported by Patti Smith and Her Band.
See also: Longitude, a popular three-day music festival held in suburban Marlay Park.

Street Feast and the Dublin Kite Festival, June 10th
Street Feast brings communities together for local lunches on the street or in the park; it’s a particularly good chance for newcomers to get to know their neighbours. Afterwards, why not head over to North Bull Island Nature Reserve in Clontarf for the kite festival? The kite festival sees families take out their kites and light up the skyline, and also features live music, kite-making workshops and competitions. Entry is free. 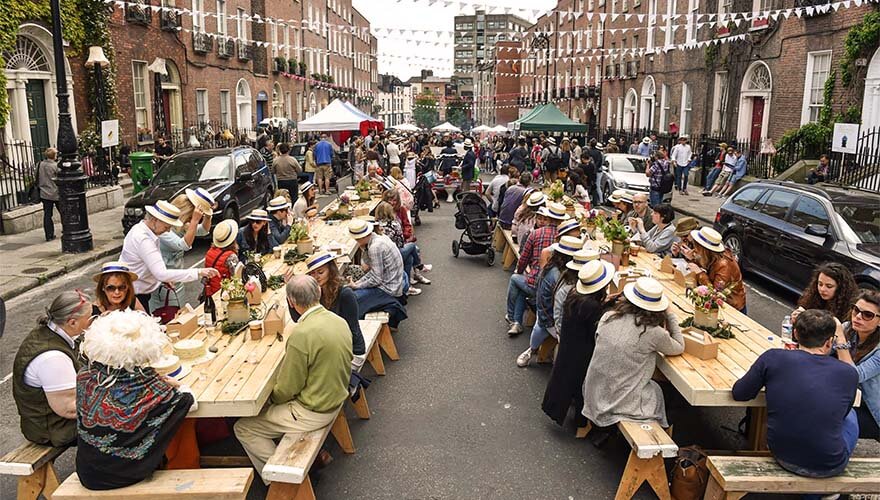 Bloomsday, June 16th
James Joyce immortalised and popularised Dublin with his magnum opus, Ulysses, and the Bloomsday Festival is marked June 11th-16th, with many Dubliners dressing in the style of 1904, readings, performances and visits to places marked in the book. Dublin, one of a small number of UNESCO cities of literature, has a rich literary heritage and Ireland has four winners of the Nobel Prize for Literature; you can find more information on a visit to the Dublin Writer’s Museum.
See also: the Dalkey Book Festival, held in a picturesque south Dublin seaside village from June 14th – 17th.

Laya Healthcare’s City Spectacular, July 6th – 8th
Featuring some of the biggest, best and brightest street performers from across the world, this is a family-friendly event full of spectacular displays, engaging interactive workshops and awesome exhibitions. The venue: the elegant Georgian surrounds of Merrion Square.

The Festival of Curiosity*, July 19th – 22nd
Science, technology and arts events and daytime activities for all ages. An engaging and imaginative festival of learning.

Beatyard, August 3rd -5th
It’s the August bank holiday weekend, which means it’s time to head out to the seaside village of Dún Laoghaire for the annual Beatyard festival with music from The Jacksons (yes, formerly of the Jackson 5), Django Django, Orbital and many others. Feel the vibes as you watch the boats sail in the distance.

Dublin Horse Show, August 8th – 12th
Equestrian sports are massively popular in Ireland, and the horseracing industry is a major employer here. The Dublin Horse Show has grown to become a highlight of the Dublin calendar, with dressage, showjumping and Ladies’ Day among the highlights. Head along in your Sunday best, soak up the atmosphere, listen to some music, check out the craft show and do some shopping.

The Big Grill Festival, August 16th – 19th
The largest BBQ and craft beer festival in Europe, with a chilli-eating challenge, workshops from well-known chefs, a children’s play area and much more.

– For a full list of Dublin’s events this summer and spring, see Dublin.ie/whats-on –

The Dublin lectures at the Little Museum of Dublin, until June 20th

Coming Home and The Great Hunger, an exhibition related to the Great Irish Famine, until June

Come on Home: from the co-creator of Thisispopbaby’s RIOT comes a new play at the Abbey Theatre from Philip McMahon, July 13th – August 4th

Dublin is in a unique position for a capital city in that it has both mountains and sea at its doorstep. We caught up with Melissa McDermott – Galz Gone Wild founder – and Ruth Farrell, to find out about the group of women who escape the city to find some scenic hush in the Wicklow mountains. Mel founded the group after moving home from London last year. She found herself lacking direction, and she was unsure of her next step. She started to hike to clear her head, but the hiking community she found were mostly male and older. They were hiking for different reasons. “There is a community there, but it’s very much about getting from point A to point

Pitching itself as “the greatest story ever strolled”, the Icon Walk cracks the heart of the Irish people wide open and tie-dyes the backstreets of Temple Bar with its vibrant colours. Like spokes from a hub, the walk’s rainbow-painted laneways radiate outwards from The Icon Factory, a gallery and shop at the corner of Aston Place and Bedford Lane. Founded in 2009 by Barney Phair, this not-for-profit artists’ co-operative is run for the benefit of the many creatives that ply their wares here. These streets are an unexpected treasure trove of culture and colour, splashed across spray-p

Sometimes the queue for the Ruby Sessions is so long that it snakes down the stairs of Doyle’s pub and out the door around past the old plaque on the wall that says “Good times are coming/Be they ever so far away” and down into the dark and puddles of Fleet Street. If you find yourself that far back, your chances of getting in are very far away indeed. These are the nights when word has leaked out into the world that a ‘Very Special Guest’ will be taking to the mic of the renowned live music night, and for the price of a six euro charity donation, you too could be part of the intimate gathering that surrounds the candlelit stage. Ed Sheeran, Damien Rice, Paulo Nutini, T