Do the vaults really contain the restless spirits of the dead?

St. Michan’s Church is situated behind Dublin’s Four Courts on Church Street. It was originally founded in 1095 and is the oldest parish church on the north side of Dublin. The church was rebuilt in 1685 and contains a large pipe organ which Handel is said to have played during the first ever performance of his ‘Messiah’. The church is still a fully functioning church with mass every second Sunday. The interior is little changed since Victorian times but what lies beneath is even more fascinating.

Under the church, through large metal chained doors and down a narrow stone stairway, are burial vaults containing the mummified remains of many of Dublin’s most influential 17th, 18th and 19th century families. The legendary Sheares brothers are down here, the highly decorated coffins of the Earls of Leitrim and even Wolf Tone’s death mask. No one’s sure quite how the bodies have been preserved. Perhaps the constant dry atmosphere is responsible, the limestone walls or the methane gas that leaks up from the soggy ground. The vaults were owned by wealthy families and some coffins are highly decorated with gold studs and fancy plaques. The Earls of Leitrim have some of the most expensive coffins – apart from the 3rd Earl. He was known as a selfish man. He was given a plain coffin by his family, some of whom gave up their own place in their family vault so they wouldn’t be buried beside him. 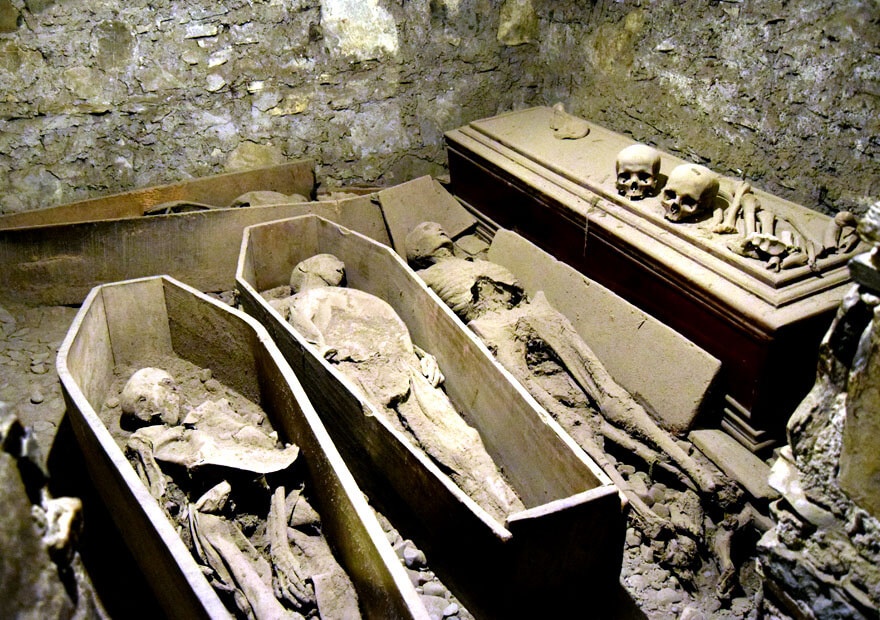 Mummified remains within the vaults of St. Michan’s Church

Inside several of the individual cells in the vaults you can see coffins, stacked every which-way, generations of the same family lying on top of one another. Some coffins have collapsed under the weight of the ones on top, the bones of arms and legs spilling out of the coffins.

The most visible mummies are “the big four”: four mummified corpses which have no lids on their coffins and are displayed together. Still very life-like, their leathery skin is covered by a layer of dust. One of them, six-and-a-half foot tall, is believed to have been a soldier who returned from the Crusades. 800 years ago his height would have made him a veritable giant. He lies with his legs broken and crossed under him in order to fit in the coffin. He lies with one of his hands slightly in the air, stretched out of the casket; legend has it that those who touch his finger will have good fortune. Visitors were once encouraged to give it a shake

The mummy known as ‘The Thief’ has had his feet cut off and is missing his right forearm – some say as punishment for his crime. Recent scientific and historical research disputes the validity of the stories surrounding the crusader and the thief but naturally it’s a lot more fun to believe them.

Further into the vaults, the atmosphere changes. Several people have reported hearing whispering around them while others report the feeling of being watched. Some people have apparently even experienced “being touched by unseen hands”. Do the vaults really contain the restless spirits of the dead? Since Victorian times visitors have descended the vault steps to see the mummies. Bram Stoker, creator of the ‘Dracula’ is believed to have visited the vaults – in fact his mother’s family burial plot is located here. So it’s definitely a place to visit for some spooky inspiration. If you like a good scare, enter if you dare.