Dubliners… Think you’ve seen it all? Cast your eyes skyward.

As charming as Dublin’s skyline is, it’s never exactly been noted for its towering buildings. Quite the opposite, in fact, with the highest towers in Dublin reaching an average of 60 metres, although planning permission has been granted for ‘The Exo’, a 73m high structure that will sit alongside the 3Arena in Dublin’s Docklands. It’s perhaps because of Dublin’s low-rise nature that neither inhabitants nor visitors tend to look up very often. There’s also the likelihood that stopping and standing on a city centre street to peruse the vista above eye level is likely to really annoy harried Dubliners. By neglecting to investigate what the city’s rooftops have to offer, however, we’re all missing a trick, according to historian and tour guide, Professor Kevin McKenna.

“If you were to build an occasional stop or walk at a gentler pace, it is easy to become acquainted with Edward Smyth, one of the Georgian era’s great sculptors,” he says. “The rooftops of Dublin’s finest buildings; the Four Courts, the Custom House, and the Houses of Parliament (now the Bank of Ireland, on College Green), are all adorned with Smyth’s work. There are relics of the British Empire in the form of the royal crest in tympanum on the former Houses of Parliament, while the roof is dominated by a statue of Hibernia, with her harp, flanked by Commerce, and Fidelity. Further echoes of empire can be found in the Lions and Unicorns on the Customs House while in the tympanum of this building Britannia and Hibernia embrace while Neptune chases away Famine. Edward Smyth’s son John followed his father’s calling and became a sculptor too, and his work can be seen atop the General Post Office, and the Royal College of Surgeons.” 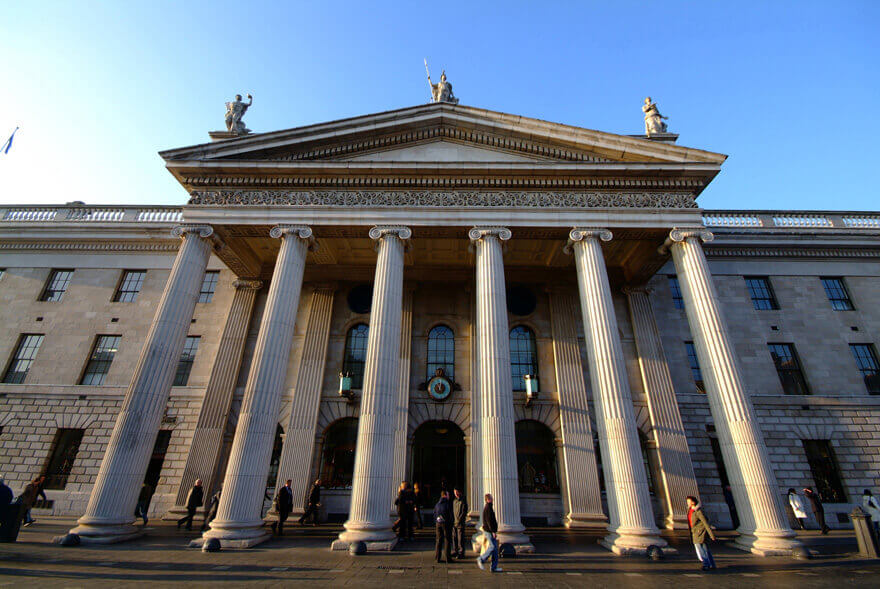 Given that it’s the centenary of the Rising, it also seems fitting to acknowledge the sculptural contributions of James Pearse, the father of revolutionaries Padraig and Willie, whose work can be viewed on top of the former National Bank, now home to fashion outlet Abercrombie and Fitch on Dame Street, as well as on the Church of St Augustine and Saint John, on Thomas Street.

With Dublin being a medieval city, it doesn’t boast a proliferation of Gothic-era gargoyles and chimera but once again, look up and you will find them on Dame Street, in Temple Bar and winking above the Iveagh Markets.

Professor McKenna’s top recommendation for rooftop insights into Dublin’s history lies on the corner of Parliament St and Essex Quay, all-too-often ignored by commuters intent on catching their train at Heuston and imbibers headed the other way looking for some soakage at Zaytoon. The building that now home to M.E Hanahoe solicitors was built in 1901, and speaks of the city’s industrial past. “This building was designed by Edward Ould for the Lever brothers in 1899, and is unique because of the colourful ceramic friezes illustrating the history of hygiene. The subject matter should be of little surprise considering the Lever brothers were in the soap business,” he says.

As Oscar Wilde wrote, ‘We are all in the gutter, but some of us are looking at the stars.’ Enjoy the view.

On an afternoon in spring, I saw John Banville coming out of the Mark’s and Spenser’s on Liffey Street. I am a great admirer of his work. I followed him down the street. I didn’t do this with the intention of killing him. Not straight away, in any case. I planned to work up to that, having first allayed his suspicions by means of some literary conversation. He wasn’t carrying a bag. But he was carrying something. He walked quickly in the direction of the river. He wasn’t smaller in real life. This was real life; he was the same height as Bono. When I’d got closer to him ¬ outside the adventure sports shop – I saw that he was carrying a wedge of parmesan cheese. I have a great enthusiasm for this cheese. Banville had gone into M&S for parmesan, and that’s what he had come out with. He’d been single ¬minded in his errand, undistracted by marinated artichokes, say, or even prosciutto. He held the cheese now in his hand, the palm facing downwards, the way an american footballer might hold the ball.