Joyce, O’Casey, Beckett – you can’t even cross the Liffey without acknowledging Dublin’s literary heritage in the names of its bridges.

The ubiquitous blue plaques marking writers’ birthplaces and residences are in such abundance, we can lose sight of how spoiled we are for the old haunts of literary greats. Wittgenstein on Parkgate Street, Bernard Shaw on Synge Street, Bram Stoker on Marino Crescent – even the Irish Writers Centre on Parnell Square.

For a thorough literary tour of Dublin, there is the option to get out the map and go wandering.

Introducing some of the city’s literary sights

You could make a Yeatsian pilgrimage to Sandymount Avenue, where you’ll find the house W.B. was born in. Travel south along the coast and you’ll see the Martello Tower where Joyce spent six nights in 1904. That was just before Oliver St. John Gogarty fired a gun in his direction, prompting not only Joyce’s swift exit, but also the opening of Ulysses.

At Merrion Square, see Oscar Wilde’s statue recline on a rock, looking off in the direction of his birthplace on Westland Row. Or cross the river to Mountjoy Square, where Sean O’Casey once lived in a tenement house and soaked up the atmosphere he would reproduce in The Plough and the Stars.

This is just one of O’Casey’s six Dublin homes. You could easily base a literary tour on him alone. 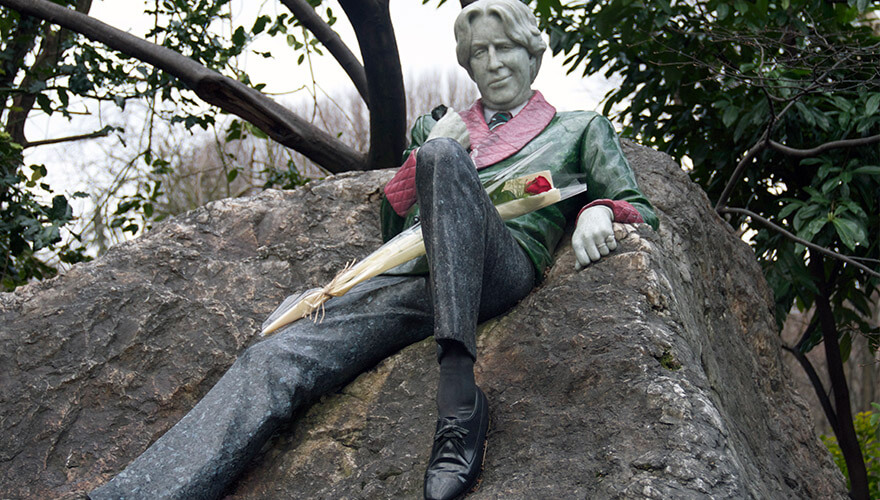 A Beckett fan would make their journey out of town, far from any dismal garret, to his birthplace on Foxrock’s leafy Brighton Road.

And then there are the addresses that are inextricable from Joyce: the ‘Dead’ house on Usher’s Quay, where the famous story was set, and Sweny’s Pharmacy on Lincoln Place, where Bloom bought his famous bar of lemon-scented soap.

Or you could simply place yourself in the hands of a learned storyteller and be entertainingly guided through Dublin’s best literary sights.

Every single night, as the city empties of office workers, Colm Quilligan and a partner put on the Dublin Literary Pub Crawl. Beginning in The Duke pub, it is an engaging piece of street theatre with nods to many of our city’s literary heroes.

The night Dublin.ie attends, Quilligan is joined by television and theatre actor Frank Smith. About fifteen tourists are here too, mainly from the US and the UK, butterfly-sipping from glasses of stout.

A pub crawl it may be, but drinking is somewhat beside the point. This is a rapid-fire journey through the literary history of Dublin.

Quilligan introduces himself and Smith as “not literary experts, but enthusiasts”, more entertainment than academia. Yet, we soon know we are in capable hands.

To warm us up, Quilligan sings a few verses of ‘Waxies Dargle’ and then the duo don bowler hats and do a short vibrant scene from Waiting for Godot.

People responded to the idea of the pub, the poet and the pint.

Quilligan tells us about the history of Duke Street, how its pubs were frequented by James Joyce and James Stephens and then, later, Patrick Kavanagh, Brendan Behan and Myles na gCopaleen.

We hear how The Bailey next door came to have the door of No. 7 Eccles Street – “a great literary relic” from the pages of Ulysses. It was rescued from a skip when the house itself was torn down and once instated in the Bailey, Patrick Kavanagh declared the door “shut” on Bloomsday 1967. 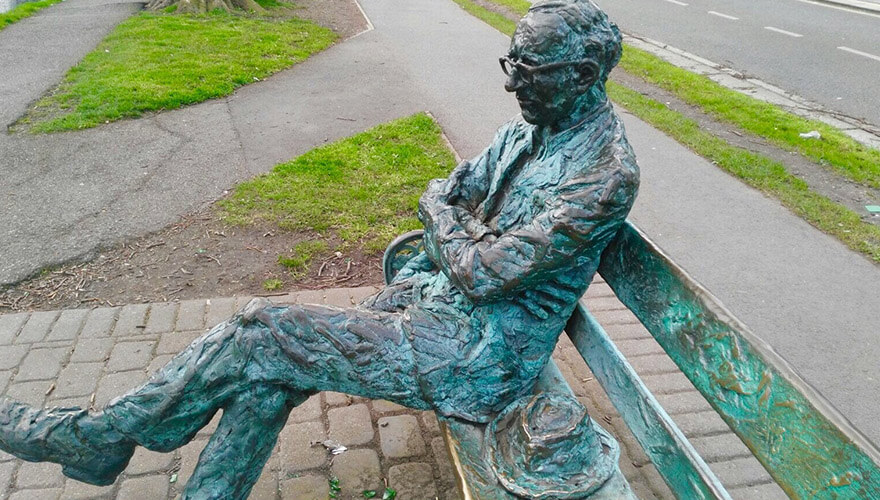 The walking part of the tour

And then off we go, down Dawson Street. We’re reminded that up the road is Finn’s Hotel where Joyce pursued his great love Nora Barnacle. In Trinity College, we stop on the steps of the theatre on Parliament Square beside a Snapchatting student who makes way for our little crowd.

Here, we are beguiled with stories of Trinity graduates. Smith acts out a despatch from a bemused Oscar Wilde who describes going down the mines in Leadville, USA.

Then Quilligan softly recites some poetry from Michael Longley and Eavan Boland. Everyone leans in. A security guard walks past, half-listening. Then, more pubs and more history.

You want the actor to have a good strong voice… and not be worried about people seeing the whites of their eyes.

We soon find ourselves at the steps of St. Andrew’s Church on Suffolk Street. People climb up and rub Molly Malone’s bosom for luck before gathering to watch the duo perform a scene from James Plunkett’s great novel of Dublin life, Strumpet City. Smyth and Quilligan pass lines between them like a gift.

Quilligan, as Rashers Tierney, sings ‘The Parting Glass’. It stops passers-by in their tracks. A man even attempts to film it, but is chided. This is to be enjoyed in the here and now.

The crawling part of the tour

It’s enchanting to see Dublin like this, through the eyes of a visitor – all charm. We end our literary tour, two hours later at the ‘moral pub’, Davy Byrnes. It was here that Leopold Bloom ordered his gorgonzola sandwich.

It is also here that Colm Quilligan tells Dublin.ie how the Dublin Literary Pub Crawl came to be. Back in 1988, he was a history graduate working in theatre when he became involved in a Dublin Millennium event that would change his life.

Another student “was going to bring people from pub to pub where writers went. Myself and another actor jumped in with a couple of the performances. And that kind of turned the thing upside down and made it sort of actor-driven,” he explains. 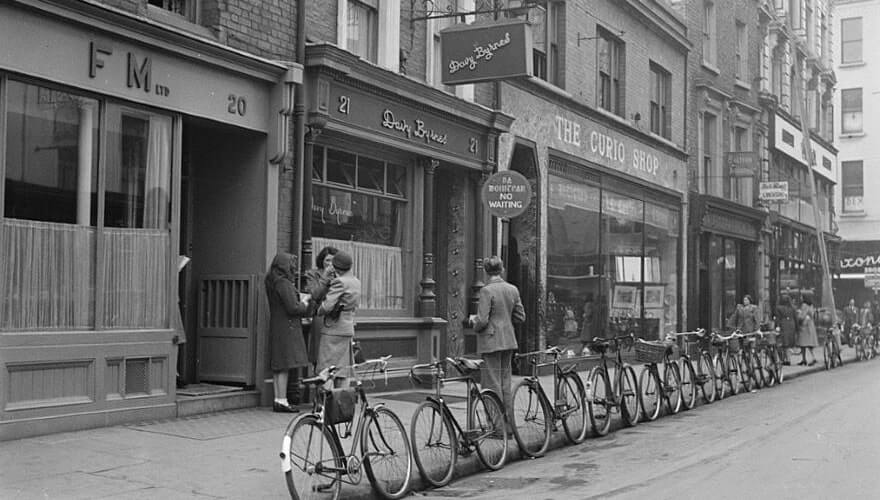 An old photo of Davy Byrnes pub, which looks much the same today

“I decided to put it on a continuous footing, doing it three times a week in the summer months, and it took off straight away. People responded to the idea of the pub, the poet and the pint – and the live element,” he says.

Quilligan invested all his savings to make it a full-time business. Matt McNulty, who was Director General of Fáilte Ireland at the time, got behind it too. That was more than 30 years ago.

Today, 20,000 people go on the literary crawl each year. Around 700,000 have been since its inception. And copycat crawls have sprung up in Brooklyn, London and Edinburgh too. However, Dublin’s literary tour remains one of the best, ranking second on Lonely Planet’s global top 10 list.

“They all got the idea from us originally,” says Quilligan. “Dublin Literary Pub Crawl was the first one to do it”.

A literary tour for bibliophiles and beginners

So why does Quilligan pick the poetry and scenes that he does? A lot is down to having a piece that works well with just two actors. Though he picked the Oscar Wilde piece in Trinity “because people are walking in his footsteps. He was there in that exam hall, he got his fine degree there.”

Then, he chose a quote from Belfast poet Michael Longley: “I get down on my knees and do what must be done/ And kiss Achilles’ hand, the killer of my son”. because “it’s an amazing line which speaks so much about what has happened in the North since 1994… I try to introduce new stuff to bring things up to date as much as possible.”

I also enjoy when people say I’ve introduced them to a writer they’d never heard of before.

He also enjoys planting a seed of fresh interest in his audience, leaving them wanting more. He also ensures the actors he works with do the pieces justice.

“You want the actor to have a good strong voice… and not be worried about people seeing the whites of their eyes,” he says. “I also enjoy when people say I’ve introduced them to a writer they’d never heard of before”.

Starting from The Duke Pub on Duke Street, Dublin’s Literary Pub Crawl runs every evening from April until October and on weekends during the winter.

Head to the website to book your tickets or read our guide to Dublin’s walking tours to explore more of the city’s sights.