Tucked away on Lincoln Place, in the heart of Dublin’s south inner city, is Sweny’s pharmacy. 100 years ago, it was made famous by James Joyce’s Ulysses. Though Sweny’s is no longer a working pharmacy, it is a key part of Dublin’s literary culture.

Today, it is run by volunteers who maintain its original 1850s Victorian style. A mahogany counter and old glass cabinets outline the room. Shelves of medicine cover the walls and old photographs sit in the cabinets.

There’s even some hundred-year-old prescriptions still waiting to be collected. The original chemist sign is still intact too, proving that this place has not lost its charm! 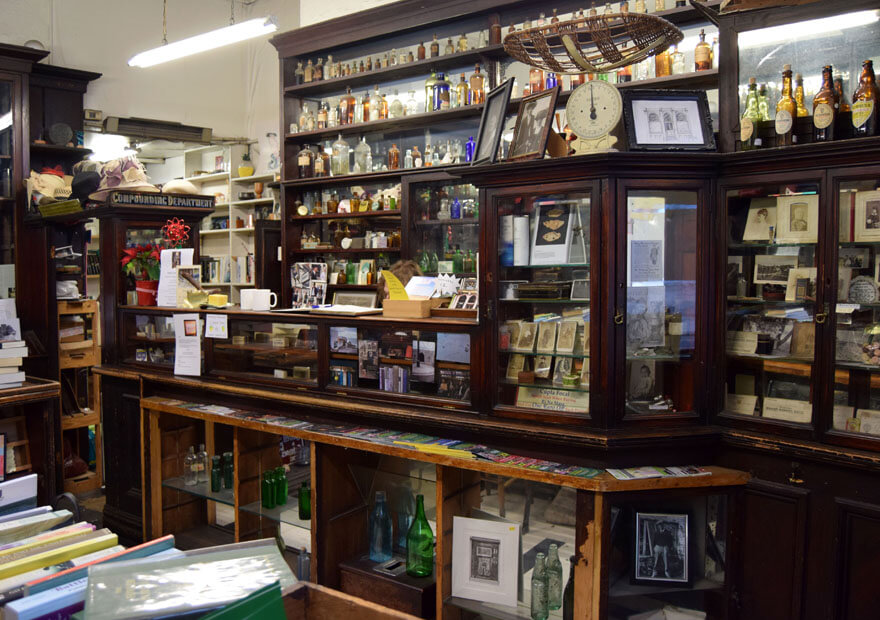 Sweny’s pharmacy was originally built in 1847 as a GP’s consulting room. A few years later, it became a pharmacy – around the same time that Oscar Wilde was born around the corner on Westland Row. However, it wasn’t until 1904 that a young James Joyce called to this very store.

A living connection with one of Ireland’s greatest books

In Ulysses, the fictional Leopold Bloom visits Sweny’s pharmacy to pick up a lotion for his wife, Molly. He consults with Frederick William Sweny – the pharmacist at the time – in such detail that you could almost recreate the prescription he describes.

Bloom admires the bottles of potions, taking in his surroundings: “He waited by the counter, inhaling the keen reek of drugs, the dusty dry smell of sponges and loofahs. Lot of time taken up telling your aches and pains.”

While waiting for the pharmacist, Bloom smells the lemon soap on the counter and decides to take a bar with him. Carrying it for the rest of the day, the soap becomes his lucky charm and a key part of his famous journey. The same one that is recreated every year for Bloomsday – one of Dublin’s best-loved annual festivals.

Sweny’s pharmacy is only 50 yards from the location where James Joyce was once stood up by his future wife Nora Barnacle. And across the road stands Kennedy’s pub, which also got a mention in Ulysses under its old name Conway’s.

“On Bloomsday this place is swarming with people. You’d hardly fit in the door,” says Davy, a Sweny’s volunteer. “People stop to buy some lemon soap along the way, it’s like a pilgrimage”.

Protecting and celebrating this Dublin treasure

Sweny’s pharmacy only ceased trading in 2009. Since then, it has been maintained by around two dozen volunteers – each working different shifts throughout the week. 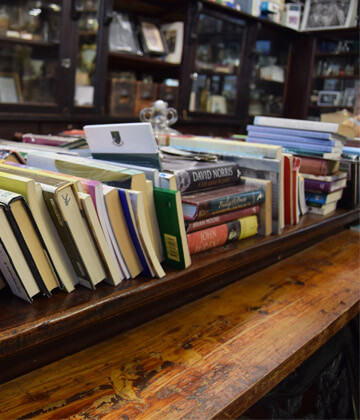 Joyce’s works are treasured here, with daily readings by both the volunteers and visitors.

Volunteers often wear the white chemist’s coat, read aloud and remember romantic Dublin through the words of James Joyce. Visitors can also read a page and pass the book around the room.

However, it’s not just tourists that come here, but regulars too. Stools are plotted around the room for visitors to sit, read and have a chat afterwards.

Thanks to its welcoming atmosphere, Sweny’s pharmacy has become something of a hub for local artists and writers. Its reading group even incorporates other works by Joyce and other writers into its schedule.

Unopened medicine bottles sit on shelves, ready to be curiously admired. A selection of secondhand books fill the space in the centre of the room, waiting to be browsed. Oh, and let’s not forget, there’s the lemon-scented soap on the counter – the very soap that made this shop famous!

Watch out for Bloomsday events this June with our What’s On listings.

Introducing Ireland’s oldest bookshop Hodges Figgis’ iconic bookstore has moved around a lot since it was founded in 1768 – from Skinners Row, to Nassau Street and, finally, on to Dawson Street. But it has always been home for Dublin’s booklovers. We spoke to Hodges Figgis store manager, Tony Hayes, to get to the bottom of what makes the country’s oldest bookshop a Dublin treasure. Tony has worked in the book trade since the 70s but, falling under its charm, he returned to the bookstore in recent years.