Dr. Ruth Johnson is Dublin’s City Archaeologist and she is charged with protecting, managing and investigating the city’s oldest heritage – much of which is underground.

As well as conservation projects, Ruth has input into new developments across the city and a role in policy development advocacy. We spoke to her about how she works and what’s going on across the city – under the ground, in our oldest graveyards and in half-hidden houses.

In conversation with Dr. Ruth Johnson

Ruth began her career working on a community excavation project in Yorkshire, while doing her A-levels. This piqued her interest in archaeology and she went on to do a Primary Degree in archaeology at the Institute of Archaeology University College London. Then, she came to Dublin to work in the field.

Here, she also did her PhD in Medieval History at Trinity College. That was back in 1997. Since then, she has taught in NUI Maynooth, worked as a curator in Dublinia and as an archaeologist in the National Monuments Service.

All of this was great preparation for her role as City Archaeologist, which she landed in 2001.

Over the past two decades, Ruth has worked on dozens of digs and excavations. So, which ones stand out the most for her?

“Well, we have uncovered several Viking burials,” she says. “Especially around the South Great Georges Street, Ship Street, Golden Lane area. Many of them are grouped around the outside of what was once the ‘Black Pool’ or the ‘Dubh Linn’.” This is roughly in the modern location of the circular lawn in Dublin Castle.

“These discoveries are significant, because they help us update our Viking knowledge,” she says. “A lot of the discoveries of Viking burials before this go right back to the early to mid-19th century… So our more recent excavations help improve our understanding by using modern excavation techniques and scientific analysis of teeth, DNA, dating etc.” 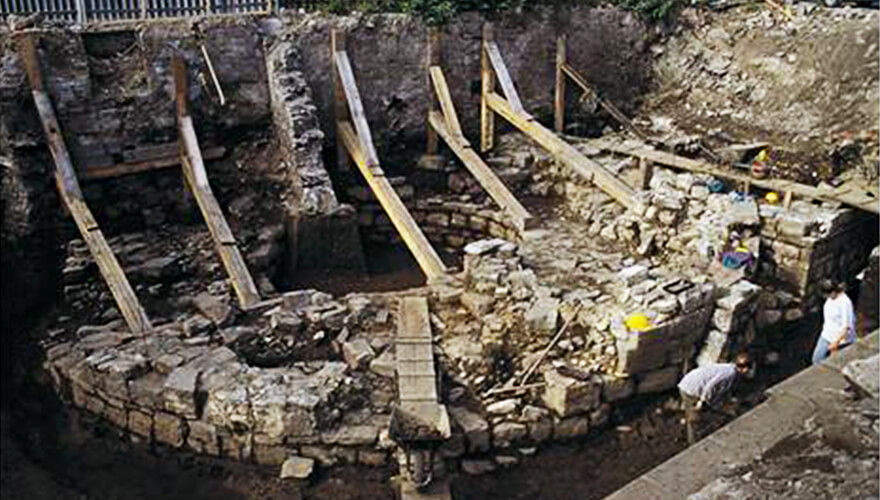 Arch of Dublin, image of part of the old City Wall.

“What we learned from excavations is that the church continued a tradition of Christian burial right through the Viking period, immediately adjacent to the Viking settlement at Dublin,” she says. Interestingly, this means there must have been peaceful co-existence between Christian Irish and pagan Vikings.

“Not only that but, after the initial settlement, Vikings may have been buried in the graveyard of St. Michael’s, according to Christian tradition,” she says. “And they cannot be identified archaeologically. Everybody mingled together, it seems!”

These days, only the circular boss of the shield will have survived.

1,200 years later, how can one tell who was a Viking and who wasn’t, we wonder… Ruth makes the distinction sound simple.

“Well, the lack of an east-west orientation, for example, which is the Christian tradition of burial,” she says. “Also, Viking-style grave goods. Men, if they were warriors, are often found with sword, spear, dagger and a shield. These days, only the circular boss of the shield will have survived and the head of the spear.”

And for Viking women? “One telltale sign is a type of brooch we call an oval or tortoise brooch. It was actually a sort of paired dress-fastener from Scandinavian Viking homelands,” she explains.

More recently, an excavation in The Blackpitts area of the city also unveiled hidden treasure.

“A huge tannery from the 18th and early-19th century was uncovered by Claire Walsh at Mill Street with a really big complex of tanning pits still intact beside a mill pond,” Ruth says. “That was remarkable to see and to preserve on record.”

It’s a new area for us, as it combines archaeology, architecture, conservation and engineering.

Ruth and her team have also discovered some very old houses hidden behind newer façades. We’re talking about 500 year old homes. “9/9A Aungier Street is a good example,” Ruth says. “And then there are a couple of early houses on Thomas Street too.”

The council has worked with other agencies to record, date and preserve several of them. “It’s a new area for us, as it combines archaeology, architecture, conservation and engineering,” says Ruth. “It’s exciting. We use the process of dendrochronology – analysis of the growth rings of trees to find the felling date for the wood.” 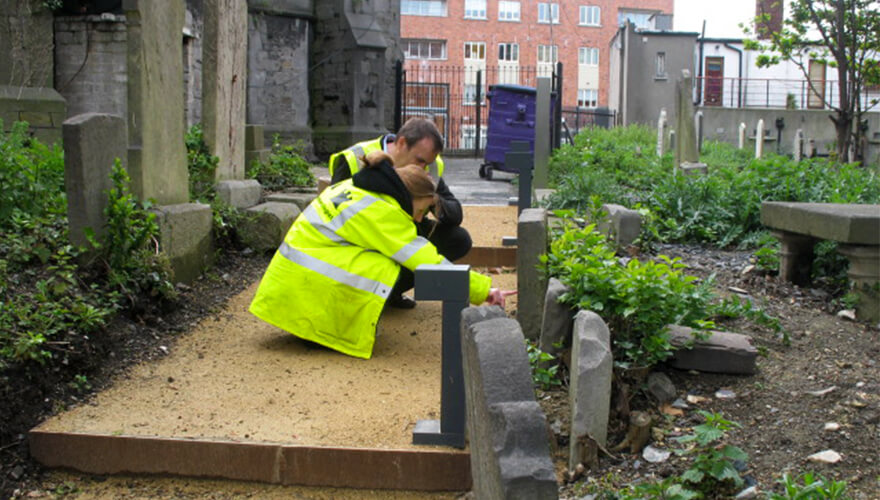 Near Thomas Street, excavations for the city’s Quality Bus Corridor also revealed that the ancient Slighe of Ireland survives just beneath the surface. This is the earliest remains of road ever found in the country.

“The reason for this survival is that the Georgians – those vandals! – didn’t develop along that corridor,” says Ruth. “Elsewhere in the Georgian core of the city, the cellars removed the later medieval archaeology.”

Near James’ Street, behind the new Pearse Lyons-owned distillery, in the old St. James’ church is another hidden architectural gem – a huge graveyard dating back 800 years. 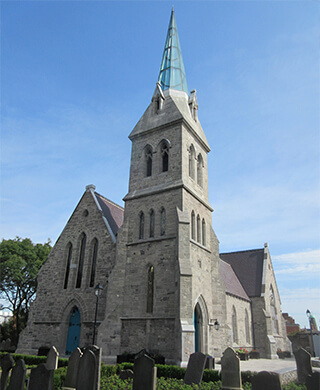 “Dublin City Council has taken this site into its ownership and I’ve worked closely with the Parks Department and Area Office and the owner of the former Church to carry out research and develop a conservation and management strategy for the site,” Ruth says.

“The parish church of St. James was founded in the 1190s and a huge number of citizens of Dublin were buried here, including paupers from the South Dublin Union.”

Ruth says that, by her conservative estimate, there are somewhere between 30,000-50,000 individuals interred here.

Some of the gravestones are remarkable… a couple even have skulls and crossbones on them.

“Some of the gravestones are remarkable. Some that are visible now go back to the 1600s – a couple even have skulls and crossbones on them! In fact, there is every type of grave there, from Commonwealth War graves to victims of the 1916 Rising. Overall, it’s a very significant site,” she says.

Ruth hopes to open the old graveyard to visitors at some point. However, right now, it is closed to the public due to health and safety concerns. Restoration work, including repairs to many of its memorials and boundary walls, are currently underway.

The unfolding story of the Abbey of St. Thomas the Martyr

An assessment at Meath Market uncovered substantial archaeological structures. Since then, different parts of the medieval Abbey of St. Thomas the Martyr, which dates back to 1177, have been investigated.

“The tiled floor from the Abbey church is preserved under an allotment on South Earl Street leaving us the possibility of carrying out future archaeological investigation,” says Ruth. “The church, of course, would have been the heart of the whole monastic complex.”

She continues: “The Abbey was hugely important throughout the Middle Ages. It was the only royal abbey founded in medieval Ireland and even had lodgings for the King to stay. It owned over 2,300 acres of land in Dublin and controlled four mills and eight orchards. And it had great power, controlling two-thirds of the water that flowed into Dublin, received tithes from the city and had its own Liberty – an area of legal jurisdiction – with its own court wielding powers of trial and execution. 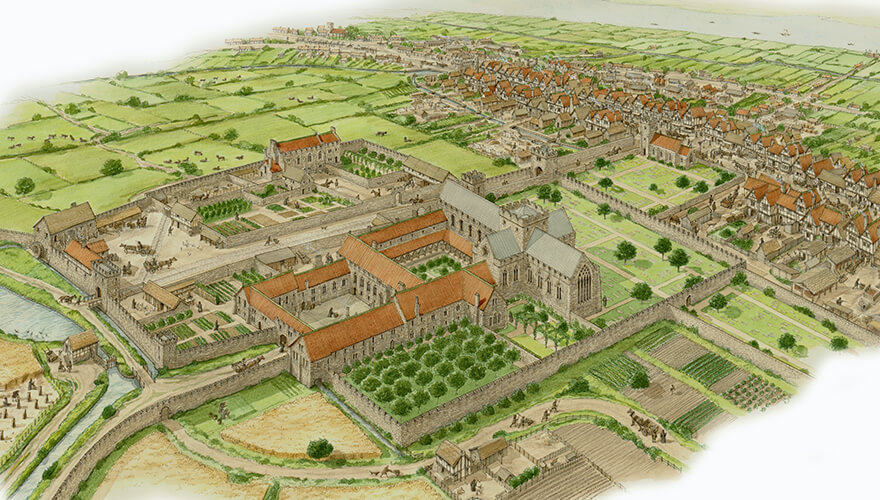 “The Abbey complex had cloisters, a church, kitchens, dormitory accommodation, as well as offices or scriptorium, a chapter house and, of course, a church. We think it looked most like the Abbey at Newtown in Trim or that at Kells in Kilkenny. The precinct was all surrounded by high walls. Physically, most of the old Abbey is now gone… above ground at least, but there is still old fabric below the surface.”

Recent excavations by archaeologist Paul Duffy located the northern precinct wall on the former Frawley’s site. This discovery showed that burials associated with the parish church, which was founded by the abbey, ran under St. Catherine’s Lane.

“This new information proves that the entrance to the precinct wasn’t to the east of the church and must have been at Thomas Court,” explains Ruth. “In general, there is a lot of work going on around the Liberty of St. Thomas.”

For those interested in Dublin’s archaeological happenings, Ruth suggests checking out excavation GIS data, which can be found on the Heritage Council’s website.

This contains all the National Museum’s topographical files from Dublin, as well as PDFs of archaeological reports from excavations in Dublin up to 2012.

Information about all later excavations can be found on the Database of Irish Excavations Report. Many primary excavation archives are also available for researchers to view in Pearse Street Library.

To find out more about Ruth Johnson’s work and Dublin City Council’s archaeological remit, head to the council’s website.

Arran Henderson
Arran Henderson writes on history and visual culture as well as art, architecture and history. He leads walking tours around Dublin, including tours of central areas, Rathmines, Blackpitts/Newmarket, and Grangegorman.

There’s a bigger picture behind the recently re-opened National Gallery wings so we went along for a visit. In 2008, Ireland was in the grip of a financial crisis like none we had witnessed before. No wonder then that more than a couple of eyebrows were raised at the awarding of a €25m grant to the National Gallery of Ireland for the renovation of its Dargan (1864) and Milltown (1903) wings. But the truth was they were both painfully in need of attention. Apart from a few cursory repairs along the way, the buildings had seen little or nothing in the way of modernisation in their century-an