From one chair to three shops – the success of Cut & Sew

Barbershop culture is on the rise in Dublin. Barbershops are becoming cultural hotspots. Places you can go not only for a haircut, but for music, design or even a whiskey.

By taking the best of New York’s barbershops and adding a touch of creativity and an Irish welcome, Sean Bryan of Cut & Sew has built his business from one chair in the basement of a record shop to three stores in Dublin’s city centre. And he isn’t finished yet. Dublin.ie caught up with Sean to see what’s behind his success.

I wasn’t staying anywhere longer than six months. I had no money or no savings… People were getting creative because they had no other choices available 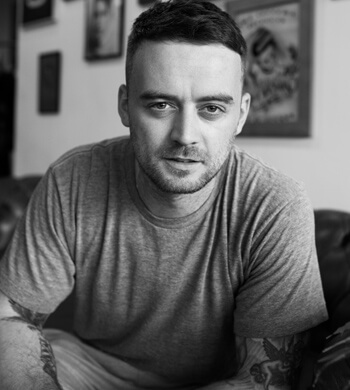 It didn’t work out, so he turned his hand to hairdressing. “That sounds a bit mad. From working on a building site to go to hairdressing.” Sean laughs. But, sitting in Blindeye – his latest shop in George’s Street Arcade – which he designed, it’s easy to see how the two have come together.

Cut & Sew shops are instantly recognisable. Pared-back, industrial and monochromatic and decorated with a combination of the rediscovered, the salvaged and the modern.

Sean qualified in some of the best salons in Dublin, cutting and colouring women’s hair. After a while, he started to build up a male client base. He was sceptical at first, but he soon came to enjoy the “instant gratification” that comes with cutting men’s hair. “Within half an hour a lad could look ten times better”.

It was during the recession that Sean started to question what he was doing. “I wasn’t staying anywhere longer than six months. I had no money or no savings… People were getting creative because they had no other choices available. I was chatting to a friend of mine. I said ‘I’d love to do a barbershop’. He said he’d ‘love to do t-shirts’.” And so Cut & Sew was born.

It started in the basement of All City Records on Crow Street, Temple Bar. Sean had gotten to know the owner, Olan from buying records and spray paints in his shop. Olan gave him the opportunity he needed.

“We didn’t need that much capital. Using the carpentry, I built things from wooden boxes that Olan had lying around. I painted the walls turquoise green got a piece of sh*t chair, the cheapest gown I could get and a back mirror. I think people thought it was meant to look like that, kind of ‘Berlin-y’, like it looks a mess but it’s cool”.

It started as a whisper – ‘go down and see this guy Sean in the basement’ – but soon it reached a point where his worse-for-wear chair couldn’t keep up with demand. He moved upstairs to the back of the store, making room for his second chair and hiring his first employee. It had started small. “You couldn’t swing a cat in it, the till was in a cupboard”, says Sean. But all of a sudden, it blew up.

It has grown so much. I want to build on what we have, get the roots strong

“That was the turning point. Was I going to stay doing work that I had no love for at all? Or would I take a risk and go fulltime into Temple Bar. I realised, this was my dream but I don’t think I recognised how serious it was. All of a sudden I registered the company. I had a logo. I got an accountant. It all got a bit crazy.”

He would reinvest whatever he made back into the business “I was making so little that I was earning less than minimum wage. In fairness my mam didn’t charge me rent… Every week I would buy something for the shop. Tiles, then a mirror, then chairs, one at a time because they were so expensive. I was storing them one by one downstairs, the first ones gathering dust waiting for the next for about a year.”

His credit union was a great help to him. “It’s great because you can borrow three times what you have. It’s like going to Ikea for a bin and coming home with a home office, you know?”

With belief in his dream and capital in his pocket he opened his second shop on Wellington Quay and then Blindeye in George’s Street Arcade in 2016. 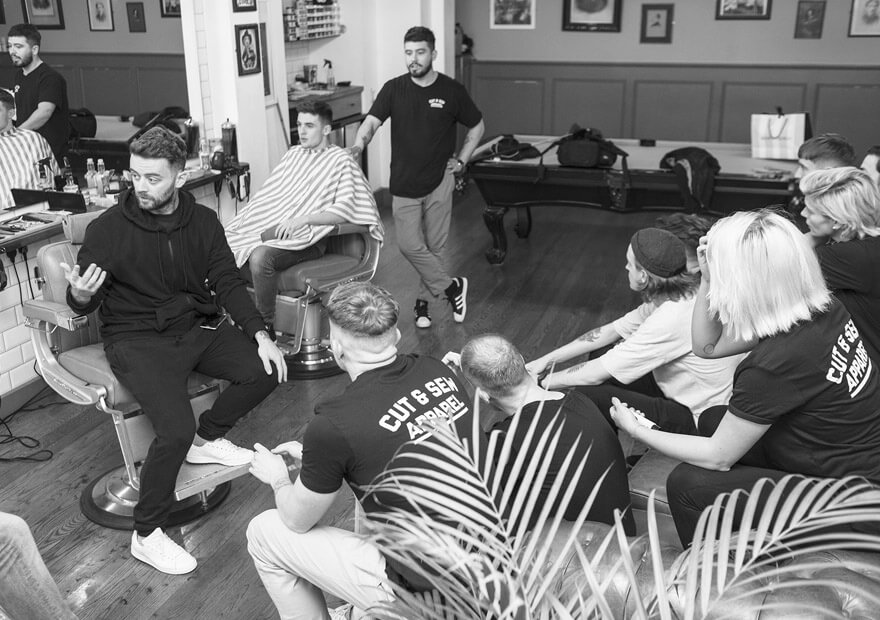 So what’s next for Cut & Sew? “It has grown so much. I want to build on what we have, get the roots strong”. That growth could come in the form of an academy or a new shop, but either way the business will continue to grow.

“When I was doing graffiti I wanted to get my name in the most prolific areas. Now I want to get my name on everyone’s head, like ‘that’s a Cut & Sew cut’.”

You’re the HR manager at a Dublin-based corporate. Your new hire has everything you need. Well, nearly everything. All they lack is the conversational English they’ll need for you to get the best out of them. Which is a pity – because that vital project starts in two weeks’ time. You need to talk to Salvatore Fanara and Rosanna Fiorenza of Travelling Languages. But first, romance. He was an engineer from southern Sicily. She was a banker from Turin. It was 2006. Salvatore: We met in Turin a few weeks before we moved to Ireland. Rosanna: He told me that he was planning to go somewhere to improve his English. Salvatore: We were looking to do something different, to make a big change. Rosanna: I decided: look, I’ll quit my job, we’ll pack and we’ll go. Salvatore: London, Dublin, Edinburgh…? In the end we just packed the car and we drove from Turin to Dublin. Rosanna: I worked in banks for another 7 years here. But I‘d had enough of banking, finance, I wanted to change, I wanted to do something else. So we brainstormed. Salvatore: I remember thinking that if I wanted to scale up my own working life I really needed to get up to speed properly from a language perspective with someone who’s not Italian. The starting point was when we realized that a lot of people weren’t satisfied in terms of the results they were getting from traditional language programmes: we’d identified a gap in the market. Rosanna: We came up with the idea for Travelling Languages in 2011 and I finally quit my job in 2013.