GROWN is a tiny Dublin company that prints beautiful simple designs on ethically-sourced, environmentally friendly shirts and t-shirts from a shop on Francis Street in Dublin’s Liberties.

Its origins lie in conversations between three friends as they journeyed back and forth between Dublin and the West of Ireland, on swimming, surfing and scuba-diving trips. The ocean-loving friends were Neil McCabe, Stephen O’Reilly and Damien Bligh.  They’d noticed rubbish in the water and on beaches.

It made them think about the ecological impact of plastics and modern fabrics, and how we produce and consume everything from food and drink to coffee and clothes. That got them researching, finding out how things are made, how supply chains work, and what happens to items after we’ve finished with them.

What they found was mostly bad news. Take clothes for example.  Each item of clothing made of polyester releases up to 70,000 plastic micro particles into the environment. Billions of these end up in the sea and ocean and are consumed by plankton and tiny fish, gradually moving up the food chain and into crustaceans, into larger fish, then, ultimately, into us. 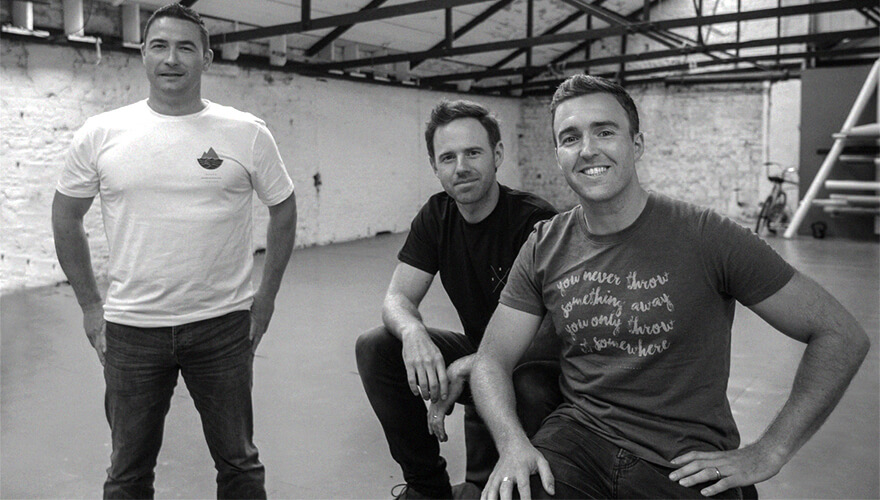 The bad news isn’t restricted to micro particles. Vast quantities of larger items swirl around the oceans, like plastic containers that originally contained our soap, shampoo, conditioner, soft drinks, or just simple drinking water. Why don’t we have public drinking fountains, like other cities, the friends wondered – or at the very least, water re-fill stations?

At our current rates of pollution, O’Reilly tells me “by the year 2050, there’ll be more plastic rubbish (by weight) than fish in our seas and oceans”. It is a disgusting thought, but it’s going to happen. We are killing ever more marine life by the minute, quite literally choking the planet with our waste.

99% of the chemicals and solvents used in the process are recovered and recycled, with minimal waste and very low emissions

O’Reilly has a background in advertising. With his talent for graphic design he was often asked to print or customize t-shirts for pals in the surf community. But when he looked at how most clothes were made, he felt he couldn’t do it. Cotton produced using synthetic fertilizers that poison soil, or contain toxic dyes, or which are produced in sweatshops that exploit children or the poor; none of which is ethical. Two recent and horrific factory fires in Bangladesh (2012 and 2016) reinforced the point.  If cotton is bad (and, generally speaking, it is) then synthetic fibres are worse, releasing microfibers into the environment. As for fair wages: as O’Reilly says, if you are paying €5 or €6 for a tee-shirt, you might ask yourself “how much is the worker who stitched this getting paid?” 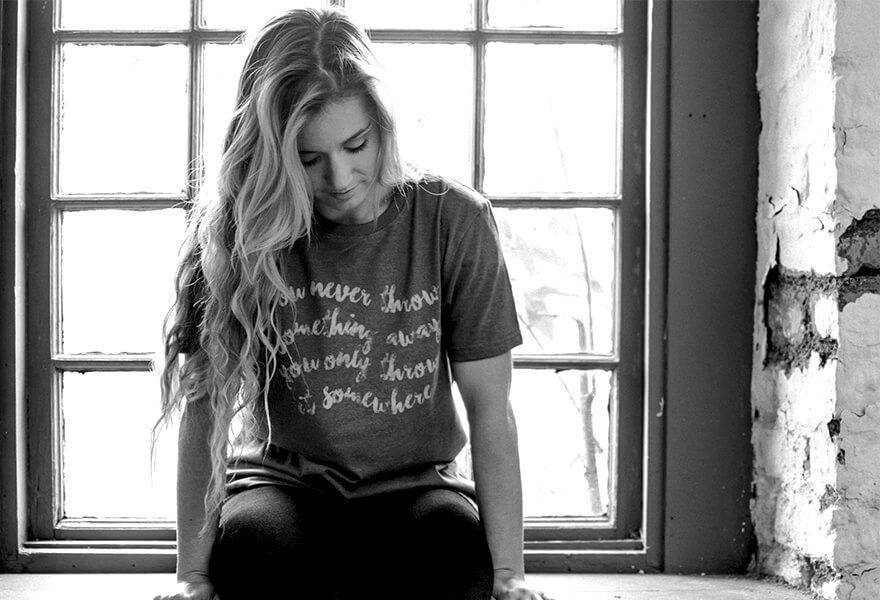 It all made them want to take action and the result was their brand of sea-themed designs, marketed under the name GROWN. All three friends had useful skills. O’Reilly was able to design logos and images, if only they could source an ethical material to work with. Damien Bligh knew about the business of fashion retail, having worked for brands like Billabong and Quiksilver. Neil McCabe meanwhile has become one of the most original and distinctive environmental activists in Ireland over recent years. Like the other two men, as well as being a director of GROWN, McCabe is also still a firefighter. It was McCabe who started the ball rolling on what became the world’s first carbon-neutral fire station, in Kilbarrack.

They plant one tree for every t-shirt that they sell, to offset any carbon footprint they might have left

That project started with battery recycling, before growing into other areas like how the firemen got to work and what type of paint was used to paint the station. Now it includes every area of activity at the station, like installing wind and solar units for green energy as well as a massive effort at rainwater harvesting (water being a useful commodity in the firefighting game). Neil McCabe has recently delivered TedX talks on how he helped change the culture at the station. The spin-off benefits from Kilbarrack have been huge, with Dublin City Council as a whole buying into many of the ideas. 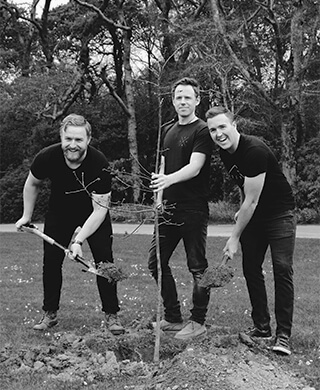 It’s McCabe who is GROWN’s Green director. It is he who devised their rigorous Green Action plan and he who does the all-important “green audit” for their business activities, always making sure their products and activities do more good than harm.

That audit process starts, of course, with the fabric they use in their T-shirts and with who stitches them. Cotton uses a vast amount of land and water. The three friends considered using bamboo, a durable, breathable material. But it transpired the chemicals used to make a workable fabric from bamboo are bad for the environment.

The fabric ultimately selected instead was Tencel, also known as Lyocell. It is a fiber made from the cellulose found in wood pulp. Crucially Tencel is produced on a “closed-loop system”, where 99% of the chemicals and solvents used in the process are recovered and recycled, with minimal waste and very low emissions. (The process has received the main Environmental Award from the EU.) Tencel is far less wasteful or damaging than cotton, using far less land or water.

The next decision was where the clothes would be made. These days production is always in the developing world but after a lot of research the Dublin trio found a superb, highly innovative firm in Southern India called the Continental Clothing Company (CCC). CCC are pioneers in ethical and eco-friendly clothes, far ahead of western fashion corporations. In 2008 they became the first company internationally to monitor Co2 footprint. They ensure all their fibres have full traceability and have worked for many years with both the Environmental Justice Foundation and the Pesticide Action Network. Not surprisingly it’s CCC that now supply the blank shirts and T-shirts for GROWN, who then add their own designs drawn up by O’Reilly himself. 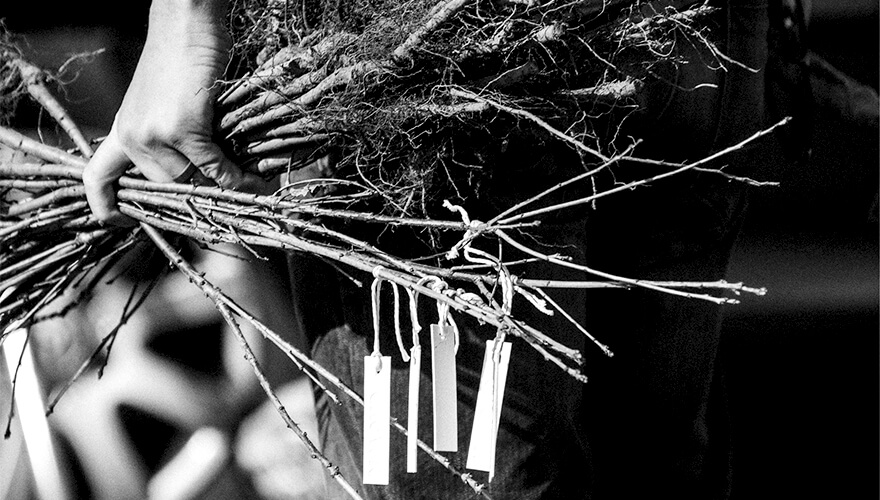 Their original GROWN premises was in South Studios in Blackpitts, until that site became yet another new development in the area. They then found a space on Francis Street, removing the old partitions and the false ceilings, and now share it with architect Declan Scullion (author of that fascinating black box on Grand Canal Dock at Hanover quay) and a watchmaker called Ian Walton, whose grandfather Ernest Walton once split the atom. That’s not a bad brains trust in one small shop on Francis Street.

Most of GROWN’s sales are online, although the shop at 29 Francis St is open for retail every Saturday. I know I’ll be heading there again soon. The Tencel feels great. Prices are around €30 for a t-shirt – this may seem hefty, but the price is what ensures everything is done properly, and that there are schools and clinics in India and that the workers there get a decent wage. Would you have it any other way? These clothes last far longer too. 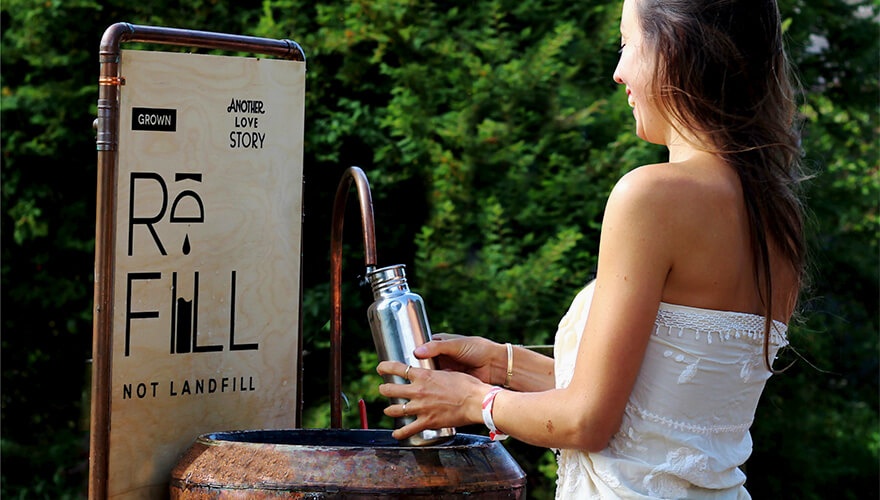 The benefits aren’t just in India. GROWN participate in talks and demonstrations at festivals, provide water refills at festivals, and organise and fund beach clean-ups. One of their slogans is “re-fill: not landfill”. They plant one tree for every t-shirt that they sell, to offset any carbon footprint they might have left. Seven hundred indigenous Irish trees – mostly whitethorn, alder and Irish oak – were planted recently at the very inspirational Moy Hill community garden in County Clare. 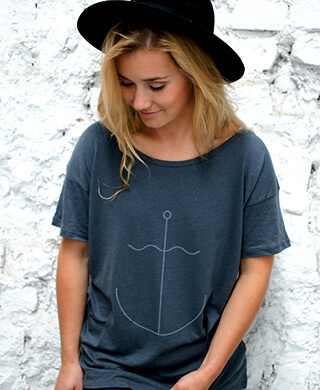 Stephen and his partners acknowledge the help they’ve had from mentors like Rosie O’Reilly, who is designer-founder of label “We are Islanders” and the sustainable fashion movement ReDress. They’re looking forward to other collaborations too, like with artist Emily Robyn Archer, who’ll create an artwork from the detritus collected on the beach at Caherdaniel, County Kerry.

GROWN seem set to go from strength to strength. Keep your eye on this inspirational little start-up. I predict it will make real waves over the years to come.

To learn more about GROWN and view their range of sustainably produced clothing designs, visit GROWN.ie