There are literally hundreds of young entrepreneurs launching their startups in Dublin, hoping to climb the precarious ladder in the tech, food and pharma sectors.

Many of these companies will go on to achieve greatness; some will be quietly successful; others will become well-known names across the globe. Others, sadly, will perish under the immense pressure of starting a company from scratch.

Dublin.ie caught up with one of the city’s successful startup founders, Jack Kirwan – pictured right. He is the co-owner of Sprout & Co. restaurants, which are, well, sprouting up all over the city.

We asked him what it takes to get from that initial spark to sustainability.

“The most difficult part is getting the first one open,” says Jack. “So much has to line up. And when you’re so young, you don’t have much money, so you have to persuade someone else to put money forward.”

The list goes on: “You also have to persuade a landlord to give you your space. And that needs to be in a good area,” he says. “So there’s a huge amount of factors.”

However, once your startup develops a good reputation, it’s a lot easier to open more places. At least that was Jack’s experience.

He was just 23 when he opened up the first Sprout & Co. on Dawson Street seven years ago. Today, the brand has seven locations and is still growing. In 2018,  the brand even opened its own farm in Kildare. 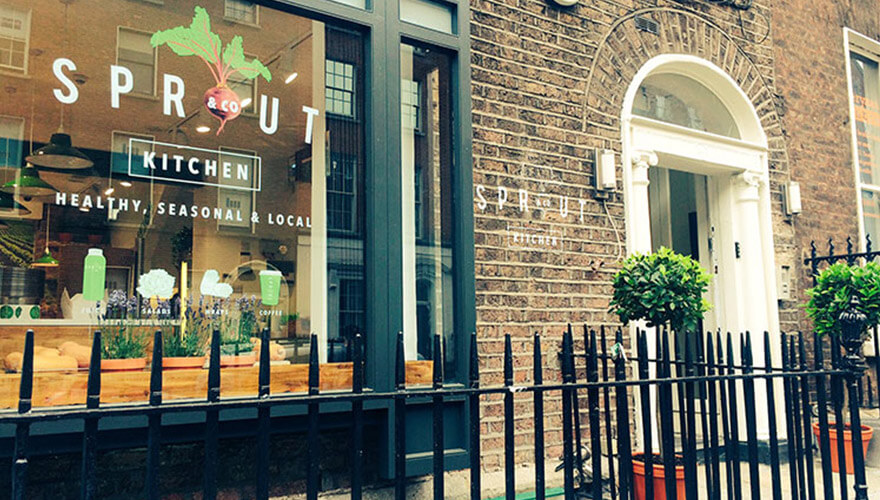 Jack says he’s been lucky because he had a lot of experience behind him from the start. Working with Avoca from the beginning gave him all the right insights and advice he could have hoped for, as well as the extra funding he needed to get business off the ground.

“I often think about how difficult it would have been if I didn’t have that experience and help from the start,” he says. “Especially with everyone wanting to own a restaurant these days.”

It all began when Jack was working at Avoca where he ran a juice business. (This was also backed and supported by Avoca.)

“I had an umbrella of help, so I was able to learn gradually,” he says. “If I’d opened up on Dawson Street straight away, I think I’d have still done a good job with it, but I don’t think I’d have made the success that Sprout has been”.

When Sprout & Co. came about, it got private investment but it also started out as something small. Jack was the only one working on collections and deliveries. Gradually, however, he was able to take on a small group of people and learn about management, which he had no previous experience in.

“It started out with one person, then managing two people and so on. So it was gradual and that was really beneficial,” he says. “That was one of the hardest parts at the beginning.”

Hard work and a little luck led to fast growth

Depending on the type of business you run, it’s hard to know how long it will be before you know whether or not your product is a success. However, it quickly became clear that Sprout & Co. was a hit.

“I think it took about three months before I could see it was working,” Jack says. “I think we got really lucky opening at the time that we did. There weren’t many people doing that kind of thing [locally-sourced, seasonal, healthy food] and people wanted it.”

“A friend of mine had the property on Dawson Street and wanted out, so a few things lined up well in that sense,” he adds. 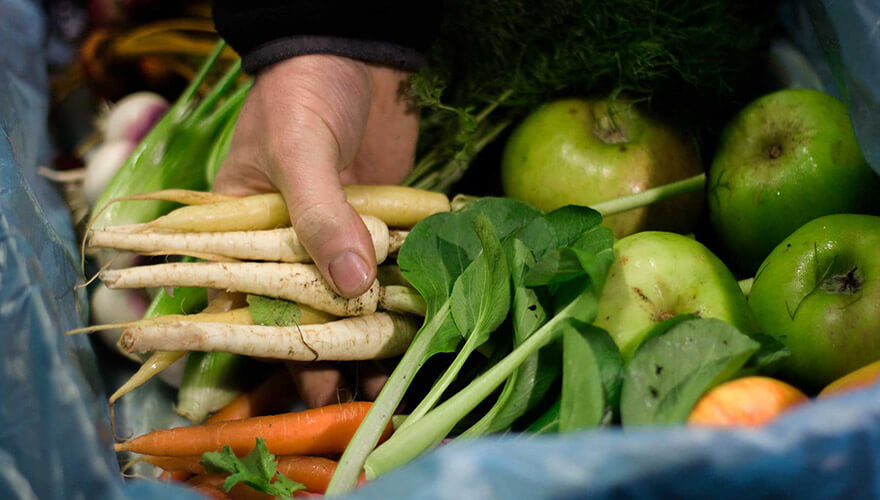 It was never Jack’s intention to open and expand as quickly as they did. However, the momentum of their success pushed Sprout & Co. to keep going. Their copy and paste approach also made its fast growth possible.

“It’s not like running a normal restaurant whereby each one has a different menu,” he says. “We have an overall model that makes training easier and the menu is the same for each one. So that made it easier to push on.”

We’re really close friends as well, so it works well and I wouldn’t change it.

At the beginning, Jack – along with his brother and co-owner Theo – was up every morning at 2am to get things ready for the day.

“That’s why I sympathise with people starting out,” Jack says. “You’re up early, collecting the fruit and vegetables and organising everything. Then, you’re coming home and doing the accounts and looking at how to grow the business. Nowadays, whilst I still work a lot of hours, my work now is to delegate – which is a lot easier.”

Thankfully, Jack hasn’t had to get up at 2am in a long time. However, all his initial hard work was worth it, because the company has grown astronomically since that first Sprout & Co. opened on Dawson Street. “We have in the region of 60 people working for us,” he says. “It’s surprising to us as well!”

An inside view of Dublin’s startup scene

There’s a huge community of young entrepreneurs in Dublin, says Jack. And, unlike in many other cities, the startup ecosystem here is an inclusive and supportive one.

“I like hearing other people’s stories about what they’ve done… You can take a lot from it. I’ve found there isn’t a competitive element to it here. It’s very supportive and everyone wants each other to do well,” he says. “I don’t know if that’s unique to Dublin, but it’s probably less cut-throat than other places.”

Nowadays, whilst I still work a lot of hours, my work now is to delegate.

However, Jack warns others against looking too closely at the competition or other members of the startup community – even if the Dublin startup scene is less cut-throat than elsewhere.

Jack says Sprout & Co. takes inspiration for its business from everywhere. Fine dining restaurants and Asian menus have inspired some of its salad ideas and coffee shops have influenced its décor. “But they’re completely different from us and not competition,” he notes.

The highlights of starting a business

It’s been an incredible journey for Sprout & Co. Since first opening in 2015, there have been a lot of high points.

“Business has been great so that’s a highlight – being sustainable,” he says. “It’s really rewarding to see that we still have all the same people who helped us paint the first restaurant and get it open”.

According to Jack, many of the chefs and front of house staff that were there the first day are still working with the company. “One of our first baristas is now one of the main operations guys,” he says. “That’s been genuinely exciting thing to see.”

Jack recalls one specific moment as one of the standout highlights of his startup journey so far. He was driving along the quays and saw the waterside boat yard building that was once a BJ Marine.

“This was before Dawson Street and I saw that building and thought it’d be a great place to open up,” he says. “Then, a few years down the line, when we had a few restaurants open, we got approached to open up in that very building. That was a really cool experience, signing that bit of paper and opening up there.”

Starting a business can be an intense and somewhat lonely experience, so Jack feels lucky to be doing it all with his brother Theo.

“It’s genuinely great. Being able to share the good days with somebody – and also the lows… Our roles are becoming more defined now as we get more established. We’re really close friends as well, so it works well and I wouldn’t change it.”

To find out more about Sprout & Co’s latest endeavours, visit its website.

Stress baking. It’s a thing, you know. It’s what Caryna Camerino used to do after another difficult day at her old job in human resources. It was also the starting point of her successful Dublin startup: Camerino Bakery. HR to hotbuns: Caryna Camerino’s startup story Caryna Camerino, a first generation Canadian who has lived in Dublin for the past 17 years, wasn’t always a baker. However, food was always a big deal at home – partly because her father, who was from Rome, is a stickler for authentic Italian cooking. Such a stickler, in fact, that she loved going to friends’ houses where she could enjoy a regular TV dinner, like n

Dublin company Nobó launched its ‘Frozen Goodness’ dairy-free and gluten-free ice-cream almost ten years ago. Since then, it’s won a bunch of prestigious awards and is distributed nationwide. You’ll also find it in stores across the UK, at a handful of Canadian markets and in Kibsons in Dubai. A few years into their startup journey, Dublin.ie spoke to the husband and wife team behind the Nobó brand – Rachel and Brian Nolan. Here’s what they had to say about their startup experience. Innovating an age-old cuisine Nobó isn’t just a marketing gimmick. Its recipes are a real innovation. “Definitely, it is in terms of the ing

“So your bar is there. You have to have that and give me an appraisal,” says Clare. “You can be honest,” she adds. That’s a terrible idea, Clare, I think to myself. I‘m a hopeless chocolate snob. ‘Dairy-free milk chocolate’? How is that even possible? As Clare herself admits, when you say the word vegan, people assume it’s going to be horrible. She reckons that they’re thinking: ‘Oh my God, it probably tastes like sawdust!’ But guess what? This Chocolatey Clare Salted Peanut bar tastes great. It’s not too sweet and icky like lots of non-milk milk chocolate. Not too pale and wishy-washy. This milk chocolate has a he