Adding colour to walls all across Dublin, James Earley is bringing street art out of its sub-cultured roots. By spray painting concepts onto walls, Earley is proving that street art is more than just stylistic.

Dublin.ie sat down for a chat with him to find out more. He tells us about his family’s artistic heritage and how he got started painting street art in Dublin.

In conversation with James Earley

During my teens I started getting interested in sub-culture, the likes of skating, basically anti-establishment stuff and I was looking at the graphics in the skate magazines.

I lived out by Dún Laoghaire and was getting the DART a lot. I started to see graffiti along the tracks and around Temple Bar. I’d never seen anything like it before. I wondered how did they do it at night? How did they manage to scale it up? Why don’t they use their real names? You can form this other identity around yourself and I was really drawn to this in a big way.

I stopped doing illegal stuff a long time ago.

I studied graphic design at NCAD and I was painting a lot of graffiti while going to college. That’s when I did a lot of graffiti-based letter pieces. I used to do pieces in Windmill Lane, the Bernard Shaw, at the back of Liberty Lane, the back of the Opium Rooms, hoardings that would come and go – they were legal to paint on.

Then, there’s really hidden abandoned buildings – like massive warehouses where there is nothing for miles and nobody cares. I stopped doing illegal stuff a long time ago; I wasn’t keen to keep on doing it! 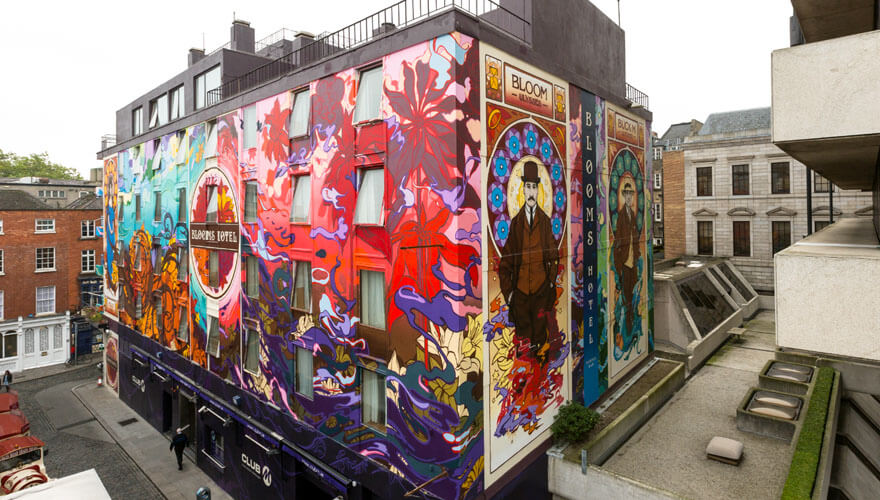 We have a long background of art in the family. That started with stained glass artists. Up until the 70s, my grandparents were fine artists too. I chose to go to NCAD, because a lot of my past family went there.

It’s actually gas chatting to my gran about the place. “They used to come around with coffee and tea and the maids would be there,” she says. It all sounded very grand – a complete contrast from the cans of Dutch when I was there!

I think the recession kicked the crap out of the art scene.

In college, I was getting bored of painting graffiti-based letter pieces. Conceptually, there is no depth to a letter-based graffiti piece. It’s all about the style and constantly working with the same letters, because that’s your tag.

So I began looking at the family history and looking at stained glass. Then, I started working on painting a series of animals – there’s still a few of them around Dublin. That was the first link with stained glass [in my work]. 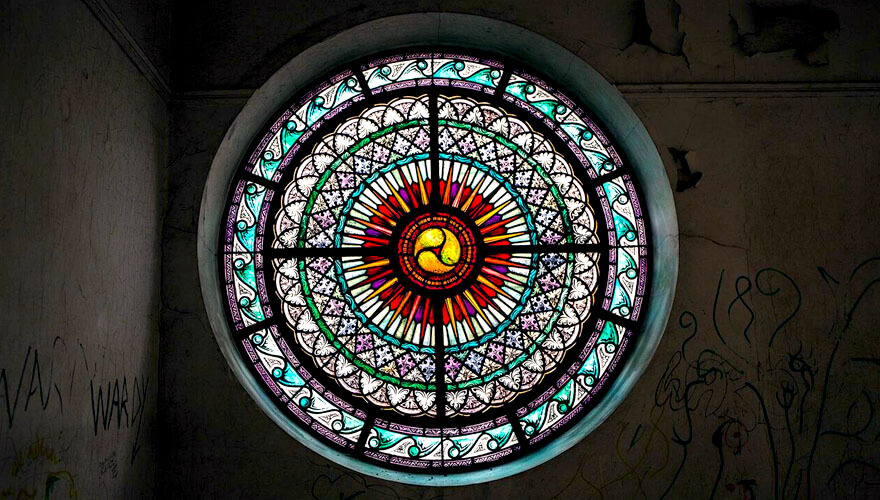 The first large one I painted was for the Dublin Contemporary exhibition. I had a piece, a huge big stag, which basically represents the great Irish elk – which is extinct.

At the height of the recession, it was a symbol of what Ireland used to be. This animal represents strength and presence. It’s to give Irish people hope but, at the same time, it’s actually kind of crumbling and falling apart now!

What I wasn’t expecting is that the general public really latched onto it. When people found out about the stained glass background, they realised there is a lot more depth to this. I was spray painting a concept.

A street view of Dublin

I absolutely love [working here]. What I love about Dublin is it’s really quick to get out of the city and get into the Dublin mountains or out to the coast.

You’re easily able to get into an area that is completely nature-based. I spent a lot of time as a child in Wales, in the countryside, and I have a grá for that. It’s probably why a lot of nature and animals have come into my work.

Dublin is small. It’s easy to get around, there is a sense of community and everyone knows each other. It keeps people in check. Don’t be getting too big for your boots! People in bigger cities think they can get away with a lot more as they mightn’t see people ever again. But not in Dublin, not at all, and I think that is a very good thing.

And what about the city’s art scene?

The opportunities that come about here are made by your own interest in trying to evolve your work. If you want to get involved with an art scene the best way to do it is to create a lot of work and engage with others through that. 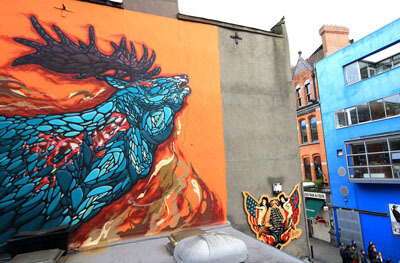 With every project I work on, I give 100%. Once you’re known for being reliable, creating work that resonates with people and getting on with people, it’s a big help.

I think Dublin, culturally, is on the up with art.

I think the recession kicked the crap out of the art scene on the funding side of things. At the same time, people became more resourceful. People became very creative and a lot of amazing work got done in a bad time.

It’s getting better, but I think there needs to be a lot more funding and a lot more opportunities given to large events, outside of the run-of-the-mill gallery events.

A couple of different things like Offset, the design conference, have been great. There needs to be something more art-based, so artists can come and speak about their work in an accessible manner. So the general public can take the mysticism out of art; I think the general public are spooked by fine art.

Engaging the public with his street art

Some people have this idea that as a street artist, you could be stand-offish – but that’s not the case at all. The majority of us are very open and want to get people involved.

James Earley has certainly come a long way since his secretive street art days. You can check out more of his work or sign up for updates over on his website.