She’s been freelancing since finishing college, working with a regular client base, taking on bigger projects and teaching part-time at NCAD.

Dublin.ie sat down for a chat to find out more. She tells us about her work with Dublin tech giants Google and Facebook, as well as some of her passion projects.

In conversation with Fuchsia Macaree

I’m from Killaloe, originally. I studied Visual Communications in NCAD and I thought I wanted to do graphic design.

Then, outside of college, I was illustrating for local magazines. I realised illustration didn’t feel like work, so I thought: “Could I get away with doing just this?” I then did a Masters in Illustration and started freelancing when I left college.

When I say to people that I’m an illustrator, their response is often: “Oh that’s nice”. I want to say: “No, it’s actually a real job”.

I don’t just draw pretty pictures. It’s hard to do well as an illustrator; you have to be conscientious to make work that’s actually successful. People respond well when you put loads of yourself into something. It’s more than just drawing for decoration. It has to work stylistically, but it has to have an idea or concept behind it.

You want to draw something that couldn’t exist as a photograph.

If it’s an editorial, I will receive the text of an article, dimensions and the colours. I am quite free to do what I want and it is a challenge to do something that is not literally what someone describes. You want to bring something else to it, something a bit abstract or emotional.

If it’s someone walking down the road, you don’t want to literally draw that. You want to draw something that couldn’t exist as a photograph. There is a reason that publishers commission illustrators, rather than photographers. 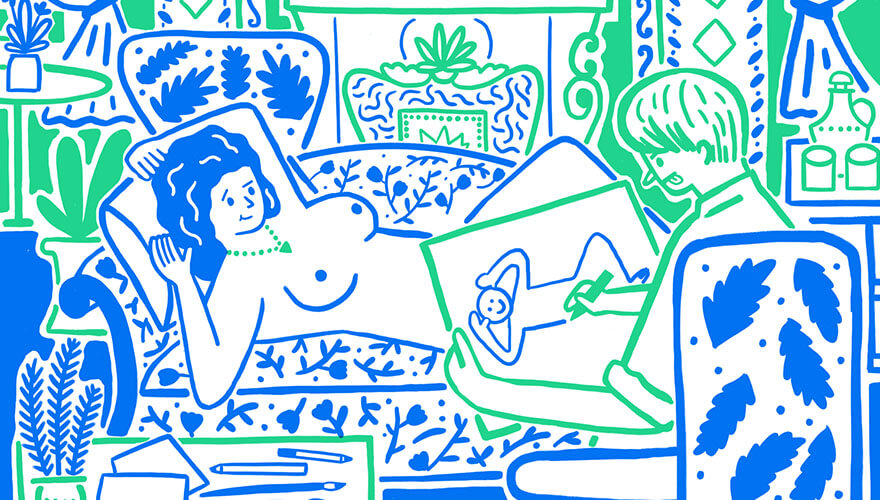 Personal inspiration and a passion for maps

I illustrated a book with O’Brien Press, which is ‘Walking Tours of James Joyce’s Dublin’. That is what most of [my maps] are from. I did maps for the 1916 Event Guide and Parade Map too.

Although, there are only so many maps of Dublin I can draw before I start repeating buildings. [I also draw people] all the time – any crowd scene. I was drawing someone recently and I had just bought a new dress, so I drew someone wearing that dress.

All the people I had drawn in the map were my friends.

I used to do a lot of maps and, for the crowd scenes, I would populate them with my friends. It’s easy to draw friends who have really curly hair, big glasses or something distinctive.

Scaling up her illustrations for Google

I just finished a mural on the Google Data Centre in Dublin. Myself and a guy from Belgium made designs for the outside of the building. I designed it and then a company painted it. They scaled it up onto architect’s paper, plotted it out and then painted it using a giant colour-by-numbers chart.

I just gave them the designs and they didn’t tell me anything until it was finished. It’s on film, a clip of me seeing it for the first time. It’s mad! I went up to it and one of the character’s heads was so big compared to what I had drawn. It’s amazing to see my work at such a huge scale.

[Data centres] are where the internet physically is, where the cloud is. If you send an email, it goes through there. It’s weird to think that this place exists and now my illustration is on the outside.

I went in and it felt like a movie or something. It’s head-wrecking to think information goes through there… so fast. It’s something I never even thought about before, until going there. 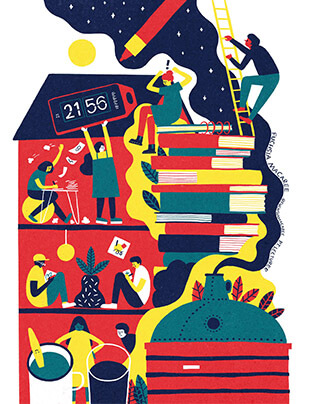 [At Facebook], they basically get artists or designers in to run workshops, make zines, prints, murals – basically make whatever they want. It’s all internal designs for the staff.

They have analogue labs, which are rooms full of art and design equipment. If you make a run of prints, they send them to offices all around the world.

If you are in the New York office, there is a range of prints that people from all the other offices have done.

How does she like to spend her days off?

On Sunday, I went for a cycle around the Phoenix Park. If the weather is moderately ok, I would go to Seapoint for a swim. Probably have a few pints after that, maybe a few chips!

I really like The Little Museum. Screen 1 of The Savoy is really good too. I like getting out of the city though. I get itchy or cooped up if I’m in the city for too long. Dublin is great, it’s so quick to get out of the city and into a suburban area.

You can discover more of Fuchsia Macaree’s work over on her website.

We all know Grand Canal Dock as the home of Google but, unbeknownst to many, tucked among the tech giants is a building where ancient crafts are still practiced. At The Design Tower, seven stories of studios play host to jewellers, fashion designers, conservationists, sculptors and more. In our series exploring The Design Tower, Dublin.ie meets long-time resident Elizabeth O’Kane. She is a sculptor and painter, who has worked at The Design Tower for almost 20 years. She tells us about her path to art, her cra