We all know Grand Canal Dock as the home of Google but, unbeknownst to many, tucked among the tech giants is a building where ancient crafts are still practiced.

In our series exploring The Design Tower, Dublin.ie meets long-time resident Elizabeth O’Kane. She is a sculptor and painter, who has worked at The Design Tower for almost 20 years.

She tells us about her path to art, her craft and the building she works in.

In conversation with Elizabeth O’Kane

I always wanted to be an artist, but I went to quite an academic school in Northern Ireland. I completely messed up my art paper and thought it would be too big a risk to pursue it.

This was back in the 80s and there weren’t the same opportunities then. So, I took the safe road. I followed advice from teachers, career guidance people and my parents and did my next strongest thing – languages.

I think it’s the only building of its kind in Dublin. We’re such a strong community…

I had so many career changes after Uni. I lived in Paris and Madrid. I fell ill after a trip to Asia with work. I was in hospital for weeks and had to take a few months off.

It was during that time that I realised: “Okay, you’re already in your mid-20s, you’re not loving this job, this is not what you want to do for the rest of your life”. I was ready to take the leap.

Finding her love for the foundry

I studied interior design. It was very craft-based. We got to do woodwork and textiles, we studied the history of architecture and technical drawing. It gave you an idea of all the things that were possible.

One of my placements was in Cast Foundry, which is a bronze casting foundry in Dublin. They were so good to me. They taught me the entire casting process. 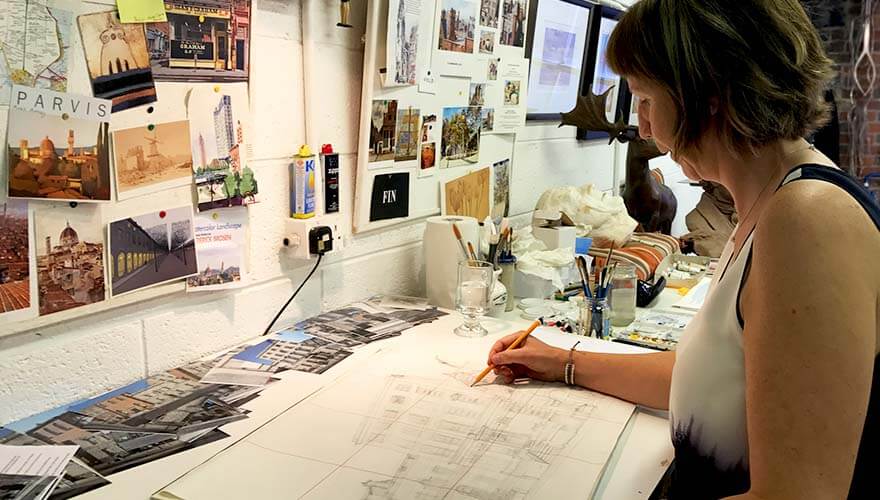 I went in and was able to make something from scratch. I just completely fell in love with being in a foundry: the noise, the dirt, coming out covered in black dust at the end of the day. Walking home in dirty builder’s boots and jeans, passing all of the office staff – jobs that I used to do.

I knew I was much more suited to the foundry. Every day was completely different.

The casting process is a bit like watching a fireworks display.

After college, I worked with an interior designer for two years part-time, working on my own paintings and sculptures when I wasn’t there. Then, I moved to a studio in Fairview. Once this space – in The Design Tower – became available, I moved in.

Life at The Design Tower

This is now home. I find it really inspiring to work here. I think The Design Tower is the only building of its kind in Dublin. We’re such a strong community, you know.

There are artists, designers and craftspeople in it. And everybody is so supportive and friendly… There is always somebody to help you – whatever you need. 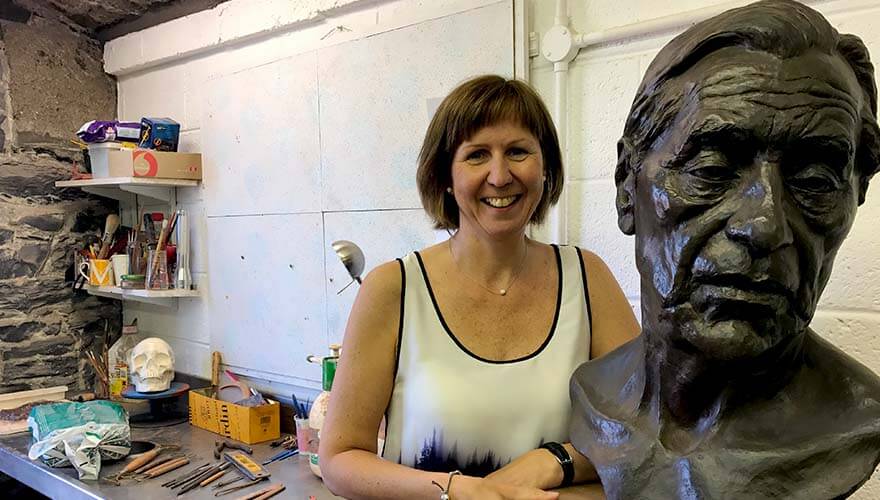 When sculpting, I start by building an armature which will form something like an internal skeleton to support the weight of the clay. Then, I get a big bag of clay and just start building over the wooden blocks.

Initially, you’re building this by hand – but as you work more into the clay, you’re working mostly with tools.

It’s a constant battle with the clay.

I’ll usually work for months on a sculpture. If I’m working on a portrait head, I’ll try and work on it for at least two months, with as many sittings with the model as possible.

If it’s a historic figure or someone who lives far away, I’ll just have to rely on photos. However, I’ll try to get photos of every angle of that person’s head. So, I could have 60 photos on my notice board to work from, but it’s much easier for me if I have the model in front of me.

It’s just something that’s in you, that you have to do every single day.

It can be frustrating. There are days when you’re just struggling and can’t get the likeness. It doesn’t come easy; it’s a constant battle with the clay.

As you progress through the weeks, every change that you’re making becomes smaller and smaller; but it’s those tiny, little changes that make a difference.

And, suddenly, the likeness starts to show through. And it could just be one little push of the clay, on a curl of a lip and, suddenly, the person is almost talking to you. It’s a nice feeling.

It will take in every single feature and detail and copy it exactly in a negative. The silicone rubber is then held in place with plaster of Paris or fibreglass outside that.

Then, you paint the mould with wax; it’s exactly like making an Easter egg. That wax is then brought to the foundry where it gets cast.

The casting process is a bit like watching a fireworks display. It’s a process that has worked for thousands of years and bronze will always be the chosen medium of public sculptures.

It’s a relatively soft metal, it’s very workable and it receives all of these colours so well and it lasts for so long.

It’s just something that’s in you, that you have to do every single day.

Elizabeth O’Kane also carves in stone and paints architectural watercolours. You can see more of her work on her website.