Brendan O’Neill, a PhD student in UCD’s School of Archaeology, has built a wooden roundhouse as part of his research. It took him about thirty days’ work over the course of ten months to complete. He wove hazel rods from a managed forest in the Irish midlands to create walls and a roof, which is topped with heather to help waterproof the structure.

Inside the house, there’s a surprising amount of space. A central fireplace surrounded by stones is unlit. O’Neill tells me that fire is an essential part of the structure, not just for heating, but for preserving the wood and keeping deterioration at bay: “the fire smokes the structure, preserves it. It’s an insecticide, a fungicide; it’s all these different things. It’s fundamental to keeping the structure alive.” Near the door is a fire extinguisher, just in case something goes wrong.

The UCD house is based on evidence of a similar building found at the Deer Park Farms site in Antrim – the heather on the roof reflects the heather that was most likely used on the roof of the Antrim house. The material employed in these houses was usually whatever could be found nearby – so they reflect the surrounding landscape. 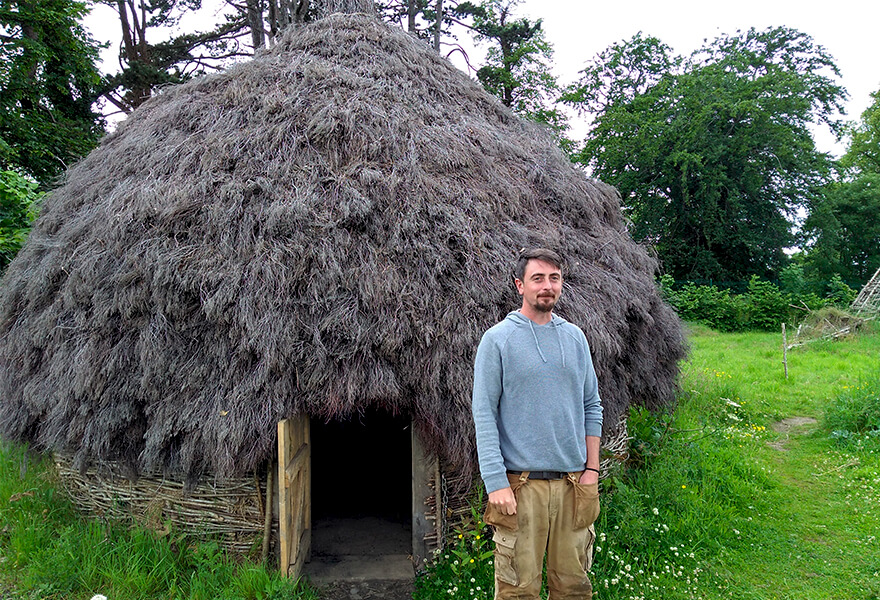 This reconstruction of past methods is a vital part of the practice of experimental archaeology, which is, Professor Aidan O’Sullivan, says, “a way of investigating the past, a way of thinking through the material.” O’Sullivan is the Director of UCD’s Centre for Experimental Archaeology and Material Culture, which carries out its experiments in this fenced-off section of the university’s grounds.

He points to the revival of and interest in craft: artisan beers, artisan foods, weaving, ceramics. “All those things are booming again because I think people feel the need to make something with your hands is good for your soul.”

O’Sullivan founded the centre in 2012 to help find out “how people make things, use things. How those things get broken and discarded. And how that forms the archaeological record. We see it as a place for research, for teaching and public engagement.”

UCD’s School of Archaeology provides courses in experimental archaeology to undergraduates, Masters and PhD students. “The students take ownership of the thing that they do in a radically different way than if they had to write an essay”, O’Sullivan tells me.

Not far from the roundhouse is a pit dug into the ground in which coals smoulder. Amongst the ash is some beige-coloured, potato-shaped objects. O’Neill reaches for one and opens it into two halves. It’s a mould for a brooch. The moulds are made from clay and sand. First, an object is impressed into them, creating an imprint. A channel is left at the top of the mould, through which molten metal can be poured. The two halves of the mould are then sealed together. Metal is heated in a crucible, then poured into the mould and left to set. 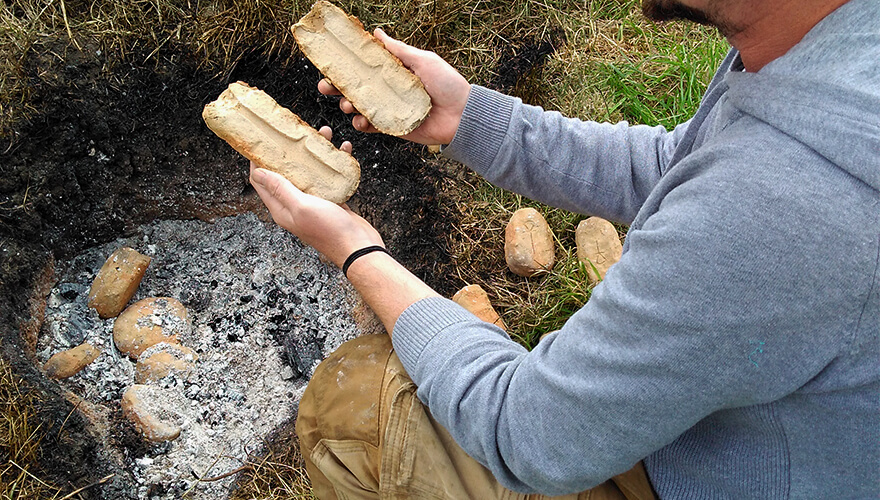 These methods seem rudimentary, but O’Neill tells me that a lot of the fine metalwork you see in the National Museum in Kildare Street, including objects like the Ardagh Chalice and the Tara Brooch, were created using similar if not identical techniques.

Back at the roundhouse, O’Neill tells me a little more about the history of such buildings. “Between the sixth and ninth century there were about seventy thousand ringforts built [in Ireland], and in the middle of a ringfort you’ll get a few of these roundhouses, maybe three, four, five of them.” Each house would last about ten years before being reconstructed, he thinks. (The roundhouse at UCD uses hazel rods that have grown for ten years – the dimensions of the building require that length.)

When O’Neill built the roundhouse, he noticed that there was a single leak in the roof. “When we first put up the thatch, it stood up a little bit. It was a bit bouncy. It was irritating me. And then I went home – I was living in Doyle’s Corner in Phibsborough in a Georgian house. I opened the door, and there was a spot leak inside. I went: ah, we’re grand.” The wooden house he had built in 30 days was no leakier than his flat. The roundhouse roof eventually settled, and the leak stopped. 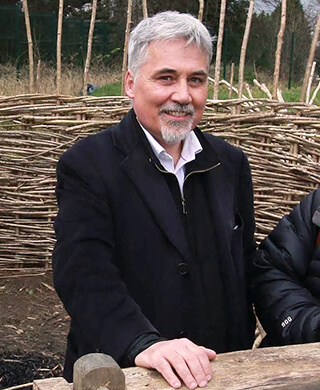 I join O’Sullivan again, and he shows me around the rest of the site. He tells me: “I would be convinced that [the roundhouse built by O’Neill] is what you would have seen a thousand years ago in an early medieval settlement. It’s an Irish native house tradition which existed for a thousand years. It maybe goes back to the Bronze Age, and then basically completely vanishes after the seventeenth century. They disappear because people say they aren’t useful.”

I ask him about the benefits of experimental archaeology: what can be gained from building thousand-year-old houses and casting bronze objects? He says that it entails a thinking through of the evidence followed by a practical exploration of how things might have worked. “As archaeologists, we carry images around in our heads about what life was like in the past. And it’s mostly based on our imagination or supposition or even false ideas. When you build a structure like this, you’ve literally changed your mind.”

It’s still early in the morning when I walk up the steps to the National Library. Standing on the porch, through the fence I can see TDs totter up the path next door, folders underarm, heading into the Government buildings. This Kildare Street building has housed Dublin’s main public reference library since 1890. In Joyce’s A Portrait of the Artist as a Young Man, he even describes students gathering here to smoke and chat. The very first time I ever came in here, I got as far as the hall. Inside, it is quieter than even a library should be. Although, there are a few eager types waiting in the lobby. A cleaner polishes around th