The Dead Zoo is temporarily closed for renovations. Get updates at museum.ie

You stroll in the door and you walk back in time… Back into a world of Victorian exotica.

With the polished wood, the old brass fittings and the glass cases, you feel enveloped in the comfort you find in a good old pub. But this isn’t a pub. This is a place of learning. Or to be more precise, this is a place of fun. This is the “Dead Zoo” or as it is more formally called, The Museum of Natural History.

Situated between Leinster House and the Attorney General’s Office, this is a real gem of a museum. It’s been going now for some 160 years and not only is it one of the oldest public museums in the country, it’s also one of the most popular. Each year some 320,000 people visit the museum and enjoy all its Victorian charms for free. “Yes it’s free in,” Education Officer of Archaeology and Natural History, Siobhán Pierce exclaims proudly. Siobhán is joined by the Education Assistant, Geraldine Breen.

The Darwin Flies are kept in the scientific collection because the museum itself only houses some 10,000 specimens at a time

With backgrounds in archaeology,  history and zoology, the two museum officials exude enthusiasm. Professionally they have hit the jackpot. They’re the proverbial kids in the candy shop. They got a job that also seems to be their vocation and they are just chomping at the bit, ready to lead us into the museum’s world of wonder. 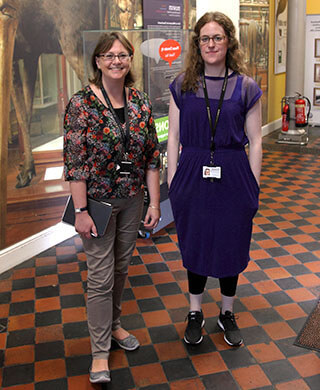 It’s particularly pleasant to be led around by two women as this world is very much the preserve of the Victorian gentleman. “A lot of the collectors would have been gentlemen scientists”, agrees Siobhán, “and would be what we call ‘Anglo Irish’.” On the subject of gentlemen, Geraldine is hastened to add – “We have very strong connections with England as well and we would have shared collections with the English museums so we have material, for example, that was collected by Darwin.” Charles Darwin that is.

Picking up on the buzz, Dublin.ie asks excitedly about what they have from Darwin. “Flies,” she says with animation. Buzz indeed. “Flies”! They’re a species too.

“Flies that Darwin collected during the voyage of the Beagle,” Geraldine says, exuding wonder. It seems there’s truth to the clichéd image of the British gent with the waxed moustache running around far flung colonial isles with a big net. And apparently there was also a big shot entomologist – that’s someone who studies insects – in Leinster House and Darwin boxed up some of his examples and sent them to him.

And flies or not, they are like this museum’s Book of Kells and only come out on display on special occasions like Darwin Day. The Darwin Flies are kept in the scientific collection because the museum itself only houses some 10,000 specimens at a time, while they have some 2 million in storage. “That’s two million and counting”, says Siobhán, as she explains that the collection is always being added to. With what for example? “The giant squid that was caught off the coast there recently, well that will be coming in to us,” Siobhán says adding, “It won’t be on display but will be in our scientific collection.”

Dubliners have a great affinity with and love for this museum, coming in on a wet Sunday afternoon and everything is dead 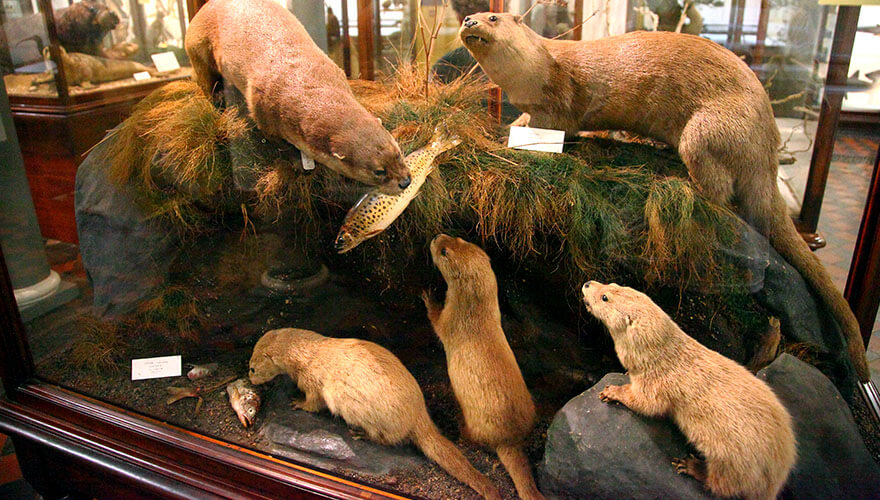 As well as Darwin Day, the museum hosts numerous other days to catch the public’s attention and boost visitor numbers. “We have Dinosaur Day coming up,” Siobhán says. “It’s great to see the kids running in with their Jurassic Park t-shirts,” she adds. Not wanting to burst any bubbles, Dublin.ie discreetly suggests that while you might be able to fool a kid with the skeletons of the giant Irish elk that greet you on entry, dinosaurs themselves seem conspicuous by their absence.

The quick reply puts the sceptic in his place. “We have marine reptiles from the same era,” says Geraldine. Siobhán joins in, pointing out that they also have a model dinosaur. While we are on the subject of dinosaurs, it seemed like a good time to query the name “Dead Zoo”. Where did the name come from? It seems nobody knows for sure.

“We have strong connections with other organisations like Dublin Zoo as they’re the ‘live zoo’ and we are the ‘dead zoo’”, Siobhán says. There’s also the witty ‘frozen in time’ angle, she adds. “Dubliners have a great affinity with and love for this museum, coming in on a wet Sunday afternoon and everything is dead. And because nothing has changed either; it’s Victorian, it’s locked in time, it’s the dead zoo.” That’s as good an explanation as any, and the Victorian surroundings certainly add to the magic of the museum.

If ever a museum was to come to life at night, this is it. Siobhán, however, informs us that she has spent the night on the premises. “And, yes! There were lots of bumps and creaks in the night but that’s because of the wooden floors and the age of the building,” she says. “I had a sound night’s sleep.” That’s her story and she is sticking to it. Well, she is a scientist after all.

But being a good guide, she does not leave our imagination unsated. It transpires that lots of gory events and bloody deeds have gone down in the museum. “Well it’s a much sought after set,” she says. The museum makes an ideal location for Victorian period pieces. Slashers in particular. “Yes, we have had Ripper Street and Penny Dreadful shot here,” she laughs. Sadly, not all the crime stories are fictional.

As we approach the end of our tour, Siobhán points to the stuffed rhino. “We had to remove the rhino’s horn because of the spate of thefts,” she says. Geraldine explains that despite the absence of any scientific evidence, Chinese men believe crushed up rhino horn is an aphrodisiac and because of that the horns fetch substantial sums. “It’s the exact same as your fingernails,” she declares, “you might as well chew your nails.”

Despite that, there is still a multi-million global illicit trade in rhino horns. Science, trumped by superstition. It’s just as well these scientists love their job. Pop in for a visit, you’ll quickly see why.

In a picture painted in 1916, Joanne Drum points out a dead body on O’Connell Bridge. In another picture, she spots a group of onlookers gathered high up on the parapet of a building. And in another she notices what’s written on the destination plate of a tram (Terenure) on College Green in 1901. Joanne is Education Officer at the National Gallery on Merrion Square. Joanne Drum: If you look at a picture with somebody standing beside you saying “have you noticed that tiny detail up in the corner?’, sometimes that can really bring it to life and make the whole experience more meaningful. More rich. Dublin.ie: This is the National Gallery of Ireland. But plenty of your pictures have Dublin as their subject, don’t they? Joanne Drum: Look at the work of Jack B Yeats – not only was he working in Dublin but he was painting and drawing and sketching what he saw around him all the time so he was kind of documenting the history of this city. And he was there at such an important time in history. This is a man who not only lived through two world wars but also all the conflict and change that was happening in Ireland at the time as well.

Dubliners know where to find Armageddon, The Whore of Babylon and The Seven Headed Beast. They’re in the Book of Revelations. But where would you find the actual book? Well it so happens that most probably the earliest copy in existence (it’s called Papyrus 47) is right here in Dublin, at the Chester Beatty. It’s just one of the myriad treasures of this museum. There are Egyptian Books of the Dead, Japanese picture scrolls, Art Deco French book bindings: the range and depth of the collection is extraordinary. Chester Beatty himself – the man who made this collection – was a mining magnate. Jenny Siung, Head of Education