Dubliners know where to find Armageddon, The Whore of Babylon and The Seven Headed Beast. They’re in the Book of Revelations. But where would you find the actual book?

Well it so happens that most probably the earliest copy in existence (it’s called Papyrus 47) is right here in Dublin, at the Chester Beatty.

It’s just one of the myriad treasures of this museum. There are Egyptian Books of the Dead, Japanese picture scrolls, Art Deco French book bindings: the range and depth of the collection is extraordinary. Chester Beatty himself – the man who made this collection – was a mining magnate. Jenny Siung, Head of Education at the Chester Beatty, has a similar affinity for precious metal. She sidesteps the ‘what’s your favourite exhibit’ question with the answer: ‘Gold! It’s in the Japanese scrolls, the jade tablets from China, the Islamic manuscripts, the bibles’.

Dublin.ie: Your background was originally in Western art. How did you deal with the fact that so much of the collection here is from other traditions?
JS: I started on an evening in autumn in 2000. I went up to Taney Hall in Dundrum to meet the Indian community during the Hindu Festival of Lights. I walked into this parish hall and everyone turned around and stared at me. But you have to make that effort. You have to go into the different communities and invite them to come into the museum. Then we can have a conversation and pick out cultural aspects of the cultures represented in the collections to engage with and share with our audiences. That kick-started the programme. We’ve been developing this approach and befriending members of the community ever since.

Dublin.ie: The problem with some museums is…?
JS: That they can tend to stay within their four walls and not engage with the outside world. That’s lethal to their existence because they’re going to lose a lot of audiences and audience engagement is massively important. 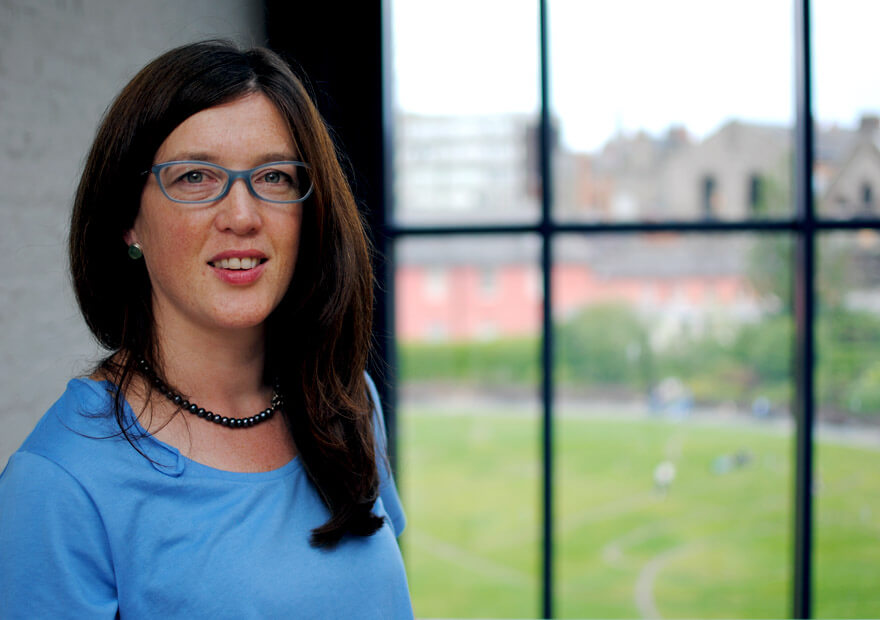 Jenny Siung, Head of Education at the Chester Beatty Library

Dublin.ie: You welcome six-to-eleven year-olds and teen groups here on visits. What do they get up to? How do they respond?
JS: They love craft, they love engineering, they love the DIY aspect. Last year we did fashion totes inspired by the fashion plates in the collection. Artist Fuschia MacAree brought in these bags and they made their own drawings and then they transferred them onto bags and started painting them. We’ve also worked with Dr Niamh Shaw. She’s a scientist and a performer and she mixes the two together to involve the kids. That’s very much coming from a STEAM aspect: science, technology, engineering, art and maths. The importance of STEAM in the education system is beginning to be recognised a lot more now.

Dublin.ie: The CB seems to be a bit of a pathfinder regarding what a museum can actually do education-wise. The paper plane launcher, for instance. What’s going on there?
JS: Because of the scientific and engineering manuscripts that we have in the collections we try and build that bridge between what’s in the collection and what young people would like to see – within reason. We were on a field trip…

Dublin.ie: Wait, you take young people on field trips!?
JS: Sure, we were with some teens this year at Dublin Maker [the showcase event for makers and inventors]. They came across the plane launcher there and they said we’d like to see that in our programme. So in it went.

Dublin.ie: Ireland’s changed a lot even since the Chester Beatty moved to Dublin Castle in 2000. What has this meant for the collection?
JS: We have cultural diversity in Ireland today and the Library is in the prime position to address this through its collections and through our initiatives. So for instance we’ve been in touch with the National Council of Curriculum Assessment, looking for reform of the Junior Cert art, craft and design paper. We’ve said: ‘look, Ireland is no longer white, it’s diverse: you have kids from different cultural backgrounds, you need to acknowledge that in the development of the new curriculum’.

Dublin.ie: What about the Leaving cert?
JS: The curriculum hasn’t changed since 1970 so it hasn’t acknowledged the changing profile of our children in schools. We’ve been working with Aoife Keogh who’s an art teacher and NCAD lecturer. For our ‘Artefacts’ resource she took the exam curriculum for the art history paper for the Leaving Cert and incorporated works from our collection into it. So now you have not just a Western point of view, you can compare and contrast this with other views. A Qur’an with a bible from our collections, for example: they’re both books, they’re both teaching the word of God, they’re both beautifully decorated, both made on expensive materials. But then one is read right to left, the other from left to right..

Dublin.ie: Next time we’ll talk to you about the Creative Museum initiative and how museums and makers can inspire each other. But right now, care to name an East Asian treasure that isn’t in the Chester Beatty?
JS: Brother’s Dosirak. It’s a Korean restaurant on Capel Street.

The Chester Beatty is at Dublin Castle and www.cbl.ie

Lonely Planet says ‘it’s not just the best museum in Dublin, but one of the best in Europe’. Dublin.ie agrees: it’s truly a revelation.

The Book of Kells in Trinity is arguably Dublin’s most famous work of art but what of all the internationally renowned masterpieces housed in the Dublin galleries? Here are ten of the major artworks waiting to be discovered behind doors you walk past every day. In the National Gallery: 1. Caravaggio – The Taking of Christ Caravaggio painted this dramatic scene of the arresting of Jesus in 1602 for the Roman Marquis Ciriaco Mattei. We see Judas identifying Christ with a kiss and the guards moving in for the arrest. The darkness of the painting is lit from within by a lantern held by St Peter, although this is considered to be a self-p

No street in Dublin illuminates the history of the city quite like Henrietta Street. The vast houses on this cobblestone street have run the gamut from Georgian grandeur to tenement squalor within the three hundred years of their existence. Now, Number 14 Henrietta Street has been restored as a museum, telling the story of the house’s journey from being the grand residence of a family of four in the 1720s, to a home to over one hundred people by 1911. All the big events of Irish history buffeted the residents here. The Act of Union of 1801 moved aristocracy away, and the Famine moved the poor here in droves, “Dublin’s broken union men” died

For 23 years The Ark in Temple Bar has provided the children of Dublin, and of Ireland, with the opportunity to experience and participate in art and culture. We visited The Ark to learn about what’s on offer for children and families today. The Ark is a dedicated cultural centre for children. It was the first of its kind in Europe, quite a forward-thinking facility for this little island. It was founded after the ratification of the UN Convention on the Rights of The Child, which safeguards children’s right to access culture and art. The Ark “believes in every child’s right to discover and love art in a society where creativity and culture are valued a