Francis Street is going through some big changes these days, subtle and quiet as they might be.

The area is providing a home to new bars, restaurants, and shops. But mostly it’s filled with antique shops, and antiques have been the main business round here for quite a while now.

“I opened about 16 years ago,” said Patrick Howard, of Patrick Howard Antiques, “though Francis Street itself has been filled with antique shops for almost 30 years.”

Patrick was a fashion designer before he got into the antiques game. “I did that for most of my life, and when I got tired of it I decided to change direction. I’d had an overlapping interest in antiques in the latter years of that career,” he said.

You go to England to find a lot of stuff…And you’d go to auctions in Ireland as well. It’s a lot easier to collect it than you might think. It’s great fun

Patrick’s shop is filled with mirrors, writing desks, paraphernalia and trinkets. It’s like walking into Narnia from Neverland via Wonderland. You could spend hours looking over the stock here; it’s not a huge room, but it feels much bigger because of all the grand merchandise that it’s overflowing with. Everything seems to be mahogany and/or gilded.

It must be a long process from acquiring the pieces to setting them up in a shop. “You go to England to find a lot of stuff,” Patrick said. “And you’d go to auctions in Ireland as well. It’s a lot easier to collect it than you might think. It’s great fun. You buy something and have it restored and you learn the history of it. It’s all very interesting. I started from scratch and this is all sixteen years in the making.”

It would be impossible to pick out just one notable piece, but he gives it a go, and picks out a lady’s travelling casket. “In the 19th Century, people spent a lot of time on the road in carriages, so they would write letters and put on their make-up in the carriages,” he said.

The casket was made in Dublin in the first half of the 19th Century by Box Makers Thos. K Austin of Westmoreland Street. They made writing slopes, vanity chests and work boxes. This particular piece has a hinged lid with a fold-down letter compartment. There’s a removable leather-framed looking glass and the interior is lined in dark blue velvet. It has an assortment of little bottles for ink and makeup, all bearing the maker’s paper label: “J&E Atkinson 24 Old Bond St. London”.

Picking up another box, he explains that “this is a writing slope that people would have used for writing on when travelling in carriages. This is a laptop to you and me.” He believes it was crafted by Austin’s of Dublin’s Westmoreland Street around the mid 19th Century. It’s made from coromandel ebony wood, which was a luxury wood usually reserved for high-ticket items.

A few doors down, you’ll find Martin Fennelly Antiques. You may wonder how six, seven, or eight antique shops can survive when competing with each other on one street. “We all have our niche,” Fennelly explained. “I, for example, am well-known for high-end deco glass, boxes and, at the moment, these fantastic lights.”

The room is filled with modernist-style hanging lights from Paris. The overall room feels like you’ve walked into a TS Eliot poem or an F Scott Fitzgerald novel. Fennelly himself fits the role of protagonist in this unwritten modernist novel. “I am not afraid,” he announced, “to stock something as spectacular as this.” He walks to the window display to a six foot long model of the Titanic. “Eight months in the making,” Fennelly said proudly. “Made in a council house near here,” he continued, “by a genius.” 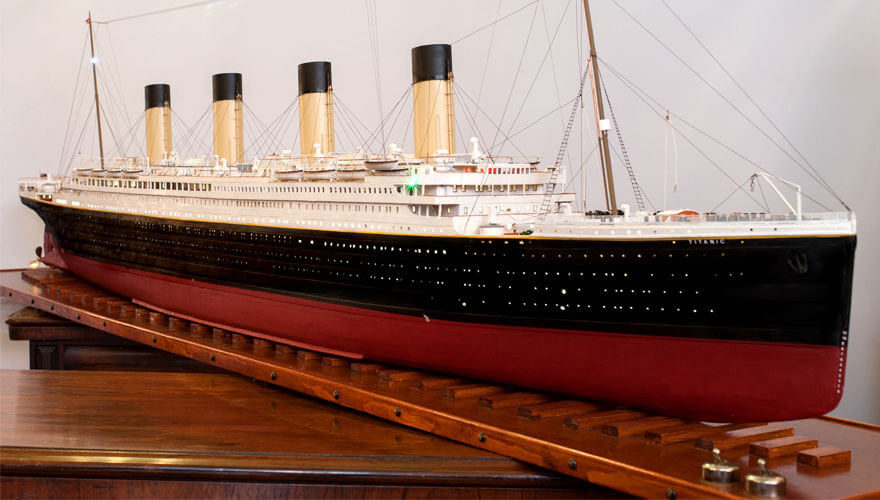 It’s a truly amazing piece of craftsmanship. He explains that it was made by a friend of his called Ken Dowling. Each individual floorboard was hand-carved. The attention to detail would put a sweat on your brow. “It lasted only a week in my window before it found a buyer,” said Fennelly, “and I could have sold it five times over.”

With regards to the antiques aspect of Francis Street, it’s closer to about 40 years that it’s really been developing

At the moment he is interested in those Parisian lights. “This sort of mid-century, high-end, hip and happening lighting,” he said. “But even newer stuff too, in that same style. For example, you won’t find another pair of baboon lamps anywhere in this country.” (Yes, they are what you’re thinking: lamps with baboon-shaped bases.)

Fennelly knows Francis Street well. He runs the social media for the shop owners on the street, promoting all things new on Francis Street. “With regards to the antiques aspect of Francis Street, it’s closer to about 40 years that it’s really been developing. Church Street in London is the big antiques area over there. And I know this sounds dramatic, but we’re bigger than them now,” he said.

“The cruise tours stopping over in Dublin send hundreds of people up here now”, Martin pointed out. “The antiques aspect of Francis Street has made the area a real tourist destination.” Martin also has a long list of celebrities who have visited his shop. Notably, Rod Stewart has come back time and time again. But he’s also had visits from Arnold Schwarzenegger. And from Jon Bon Jovi too.

You could spend a number of hours strolling down Francis Street, wandering into each of the antique shops and hearing all the stories. As Fennelly said, they each have their own niche, a little bit of something different that you won’t find anywhere else. And what’s best is that they each know the history and tales behind everything inside their shops, as well as on Francis Street. It’s a bizarre and wonderful community that is thriving these days, thanks to the antique shops that line its footpaths.

To find out more about the antique shops of Francis Street, visit the ‘Dublin’s Art & Antique Quarter, Francis Street’ Facebook page, which is maintained by Martin Fennelly.