George’s Street Arcade is Ireland’s first purpose-built shopping centre, and one of Europe’s oldest, having been built in 1881. We popped in to talk to a few of the stallholders.

Milo Póil, Man of Aran Fudge
I’m here in the Arcade just over two years, my third Christmas! I am the son of The Man of Aran Fudge! It’s my dad who makes all this stuff, he’s being doing it for 20 years now. It’s actually a family recipe. It’s my Grandmother’s recipe, well, the tiger butter flavour anyway. That recipe was made 90+ years ago with only a few changes! This is one of the only permanent stalls of ours. We’ve another on Ínis Óirr, which is where my family come from. My cousin Eoghan has it now. I’m actually the only one who was born on the mainland. I’m in Dublin since 1999. I came up and started bartending for about 15 years. I absolutely adored it and then the last year and a half of it, I didn’t want to work till 4 in the morning. I had a couple of years of soul-searching or dossing – as I was on the dole – looking for something to do. Now I’m doing this, thanks to my Dad!

My favourite flavour changes depending on what season it is. We have things like the Christmas pudding – that only comes out a Christmas. The rhubarb and custard only comes out in summer – when we have the rhubarb growing in the back garden. It’s being made in the Aran Islands by my cousin but mostly by my Dad in Meath. He brings it to market. My father does mostly market fairs, exhibitions and the ploughing championships – it’s honestly his favourite place on earth! He loves it! It’s the people. He does about 200 shows a year, but those other days he’s not at home counting money or watching telly, he’s at home making fudge! 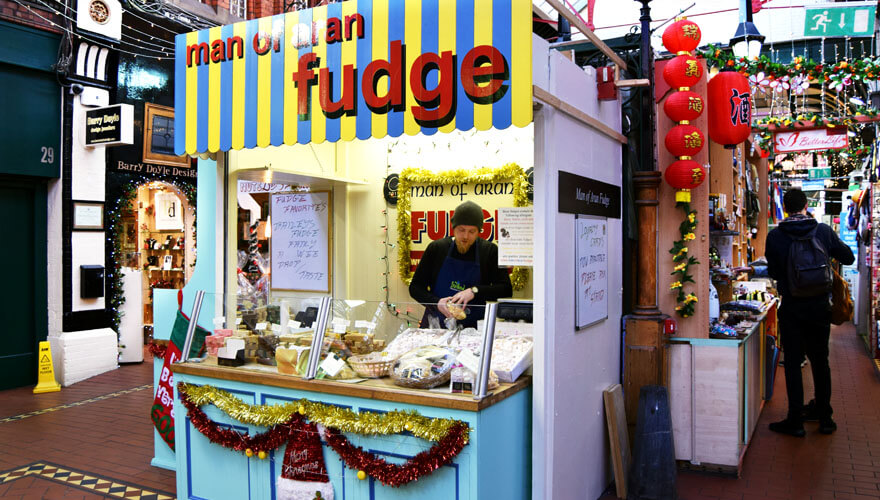 The simplest fudge for example (once you know what you’re doing) is easy to make but still takes 8 maybe 9 hours to make it. Another day and a half for it to settle and that’s just the simplest one. I’ve twice tried to make the fudge, it’s just so long winded to do and when I’m not here I’m addicted to video games. Making fudge would get in the way of my gaming and my cousin is just better at it! He’s been making it the last five years and is starting to come up with his own flavours now.

I’ve been in Georges Street Arcade for maybe 7 years. I used to come here as a kid with my aunts. In the old times it used to be a meat market and I’ve some vague memories of coming through it. I grew up in Perrystown. You look at Eastenders or Coronation Street and it does reflect life in cities, people actually are communities despite the large population in Dublin. In Dublin there’s communities of people who all know each other and interact on a regular basis. Just like here in the arcade. There are really good people here and I like it very much. 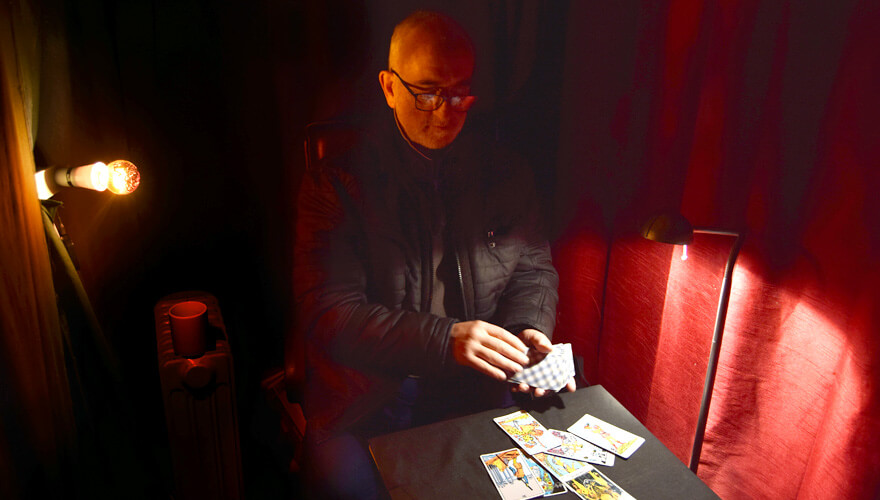 I’m an engineer by profession but doing tarot readings about 20 years now. People’s perceptions of tarot reading are probably way off what it actually is. We wouldn’t be your typical fortune teller! I work a lot with people on life coaching, helping sort their lives out. We use the cards as tools that might help them so they can maybe have a different perspective on their life, love, careers, anything that’s going on with them. In the last 10 years since the recession started there’s a lot of troubled people out there. Then we’ve got the men and women who come about love – the lighter stuff, you know. It’s important, but it wouldn’t be as serious as people in crisis. I meet a few characters, great characters but also some really troubled people. There is a steady stream of tourists and a base of regular clients.

I travelled for 15 years, commuted to and from Australia every three months. I used to do radio TV here, tarot and astrology magazines and newspapers and then I worked on ABC TV in Australia, Channel 7 and ABC radio.

Tony Schorman, Lir Coins
I’ve been here probably 5 or 6 years now. I buy and exchange coins, militaria, medals, badges and memorabilia. I exchange them with the people that come into me here. I was into horses all my life, I used to just do it at weekends in Dun Laoghaire, Rathmines and a few other places but they all closed. It gives me something to do because I’ve retired this number of years, so this keeps me occupied. I’m originally from Dublin, I live out Stepaside way. I lived in Wicklow for a good bit of my life too. 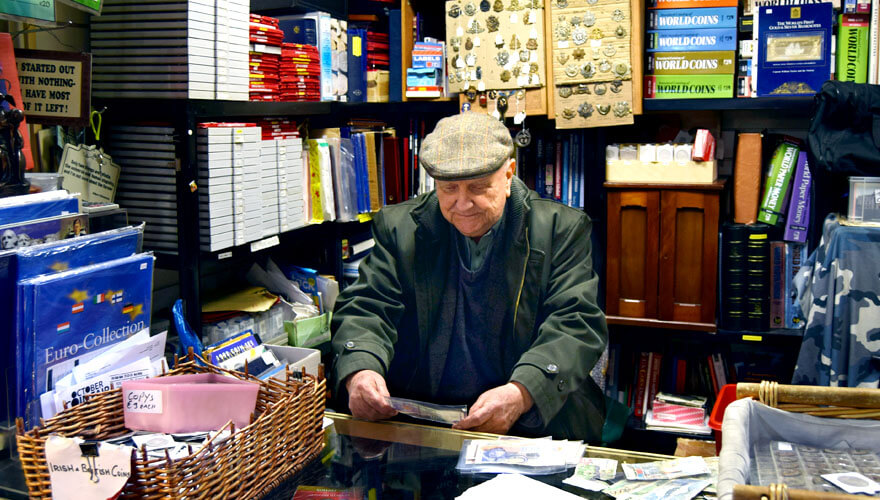 People come in with coins they want to get rid of. People bring them in to me. I might buy the odd one in an auction. The coins and notes are the most popular. The stuff is from everywhere, the biggest quantity is from Ireland. It’s easier to sell Irish stuff to Irish people!

Discover more stallholders in our article about diversity at George’s Street Arcade.

Co-working that went from pop-up to permanent The Fumbally Exchange began as part of the pop-up space revolution that took Dublin by storm a few years ago. Its name came from its first temporary location, which was on Fumbally Lane – right next to the well-known Fumbally Café. Today, however, the Fumbally Exchange has a permanent home in the freshly refurbished Argus House in the popular Blackpitts area of Dublin 8. It has even expanded to a second location in Waterford. So what exactly is the Fumbally Exchange?