“Dublin for me has always been a place to live. It’s always felt like a place where communities are, and a lot of it is not always obvious to the outsider. It’s a suburban city.”

Ronán Hession is a Dub through and through. The author, musician, civil servant, husband and father was raised between Beaumont and the north inner city and now resides in Portmarnock. We sat down to chat about his creativity, grá for Dublin and what he’s looking forward to doing in the city post-lockdown.

Ronán’s debut novel, Leonard and Hungry Paul, came out in 2019. In 2021, it was chosen for the One Dublin One Book festival, which encourages everyone to read a book connected with the capital city during April every year. His debut comes out in paperback in the US this year, and closer to home, his second novel Panenka comes out in May. By day, he works as a civil servant in the Department of Finance, but he’s no stranger to a creative side hustle. He’s been writing, performing and self-releasing music as Mumblin’ Deaf Ro for over 20 years. So, what’s great about being a creative in the city?

“I like that guerrilla tactics work in Dublin; you can set up a gig easily. Particularly during the financial crash, a lot of places that previously weren’t available became available. Particularly art galleries, they’re just a big rectangular room so that you can go in without an amp, without a mic, it was a fiver or less, and you could do gigs simply. I was involved in the music scene from 1993 up until around 2012. You could record an album at home, get it pressed in the Czech Republic and imported into the country, and the shops would sell it, the Irish Times would review it. What should have been like a small homework project could get national media attention. It just shows you how in a small country that can come to be an advantage.” 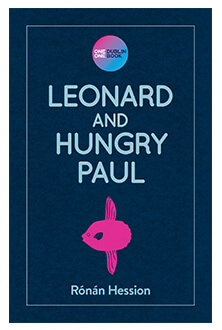 Ronán carries this DIY approach into his writing career. He works with small independent publisher Bluemoose Books and engages his readers directly – he doesn’t want to “sit back smoking a pipe in [his] mansion collecting royalty checks”. What advice does he have for people that want to be creative alongside the day job? Well, Ronán believes “if creativity is part of your life, you have to make it a full part of your life”; otherwise, you might have regrets later. He recommends making space in your life to achieve your goals and champions discipline and routine:

“Probably all debut novels are written in the cracks of time you’d use to sit around. Clear some space in your life to do it; it’s a big commitment. It’s like if you want to run the Dublin City Marathon, you wouldn’t just do it. You’d clear some time in your life to train for it. Have a part of your day where you show up to write, and it doesn’t matter if you write or not. Don’t evaluate your writing sessions. Treat it as a contract where you just show up.”

Ronán finds his cracks of time in the few hours after his sons have gone to bed. He carries around his intentions and ideas with him during the day, enabling him to go for it when he sits down to write. Through both his writing and his music, he has created a semi-autobiographical body of work that he’s proud of: “I’m really glad when I look back at my twenties and thirties, I’m 45 now, and I can say well, I’ve three albums to show for them, or the past five years and have two novels done. You feel like you’ve documented where your head was at for those periods. It’s never time wasted.” 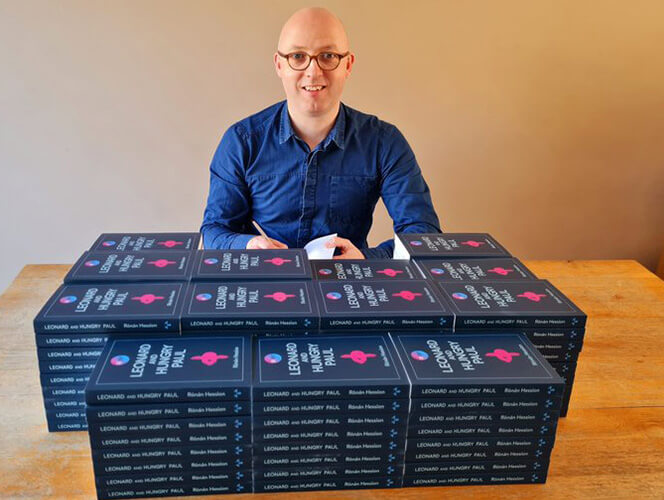 Aside from his love for its music scene, Ronán champions many other things about Dublin. He believes it’s “a place that you can waste time well in. Parks, the churches, the galleries, the bookshops, you don’t have to spend money or buy a ticket for anything necessarily, you can just kind of spend a lot of time, that’s what I’ve always done.” Post-lockdown, he’s dying to get back into the city:

“I’m dying to go back to the Hugh Lane. A lot of my headspace is in words the last good while, and I think I need something else; something NOT wordy, not based on thoughts. Going into a room and just picking whatever painting strikes you, not trying to analyse it, not trying to read the panel, just letting it suck you in, I love the Hugh Lane for that. I like the Chinese and Korean cafés around the north inner city too. On my lunch breaks, I just potter in there, eat whatever is going on that day, and lose myself in the city. When I first started working, it was homogenous Irish stuff, but it’s become much more varied.”

Ronán’s two sons, Thomas and Jacob, are most looking forward to getting back into Baldoyle Library, where they regularly go to borrow books. They also “survive in galleries a good bit, as long as we’re stopping for pancakes along the way”.

We’re all looking forward to those type of days again.

The 2021 One Dublin One Book Festival takes place online during April. Pick up the special festival edition of Leonard and Hungry Paul from all good book shops, or your local Dublin City library.

The business owners in George’s Street Arcade are a diverse bunch, coming from the likes of Nepal, Poland, France and Venezuela. We meet some of them to learn about what brought them to one of Dublin’s best markets. How business is done at George’s Street Arcade The much-loved George’s Street Arcade is more than just a quick way to get to Drury Street. It is a living breathing illustration of integration from all over the world, under one uniquely Dublin roof. As Dublin.ie approached the green gates, it noticed an impeccably dressed lady with a blossom i

Just to be clear, the position of Historian in residence doesn’t come with an actual residence. ‘More’s the pity’, says Cathy Scuffil, who is the Historian in Residence for that LA-sounding bit of Dublin known as ‘South Central’. This is one of the six sectors of Dublin – each based on electoral districts – that now have their own historian. Tara Doyle of Dublin City Council runs the programme, which builds on the success of the 1916 commemorations and a surge in interest in history in general. She sums it up very simply: ‘it’s all about letting historians talk to people about history’. This doesn’t mean that it’s simple to do, however.

It’s a fine brisk November morning when Dublin.ie meets up with Ed Boden at his office in Blessington Basin, the north side’s secret park. But we are not here to talk about Ed’s job as chief of parks today. No, we are talking about another curious string to Ed’s professional bow. Curious, quirky and colourful. Because Ed is the Dublin City Council vexillologist. “He’s the what?” I hear you say. Well join the club, I said it myself. But if you are stuck for the answer, we’ll give you a clue. A clue that comes from a recent Nobel Laureate who told us “The answer my friend is blowing in the wind, the answer is blowing in the wind.” Flags. It’s unlikely Dy