It’s a fine brisk November morning when Dublin.ie meets up with Ed Boden at his office in Blessington Basin, the north side’s secret park. But we are not here to talk about Ed’s job as chief of parks today. No, we are talking about another curious string to Ed’s professional bow.

Curious, quirky and colourful. Because Ed is the Dublin City Council vexillologist. “He’s the what?” I hear you say. Well join the club, I said it myself. But if you are stuck for the answer, we’ll give you a clue. A clue that comes from a recent Nobel Laureate who told us “The answer my friend is blowing in the wind, the answer is blowing in the wind.”
Flags. It’s unlikely Dylan had flags in mind, so let’s grab Webster’s dictionary. ‘Vexillology’ is the study of flags. And Ed is the city’s vexillologist. In more common parlance, Ed is the DCC flag man. And there’s quite a range of duties involved. “It varies. But It would be unusual for a week to go by without me doing something involved with flags,” he says.“There’s the national flag, the EU flag and the Dublin City Council flag flying permanently on the roofs of the Civic Offices, the Mansion House and City Hall,” Ed says.

“We see more of the national flag now because up until a few years ago the national flag was not allowed to fly after dark,” Ed explains. That all changed about four years ago when the Taoiseach’s office amended the protocol, saying the flag can fly at night as long as it is floodlit. The national, the EU and the Dublin City Council flags still need to be changed regularly, as they get dirty and old. Then in addition to these flags there are some 140 distinctive big flag poles along both banks of the Liffey that need to be taken care of. Flying big 12 foot by 4 foot flags, these flagpoles are used to promote different events in the city – whether it’s festivals, culture or sporting matches.

As we spoke the Green, White and Orange was flying in support of the national team’s match the following night against Denmark. Being fair-minded chaps, Ed says “we also had both the Irish and Danish flags flying on the three bridges: Butt bridge, O’Connell bridge and Grattan bridge. 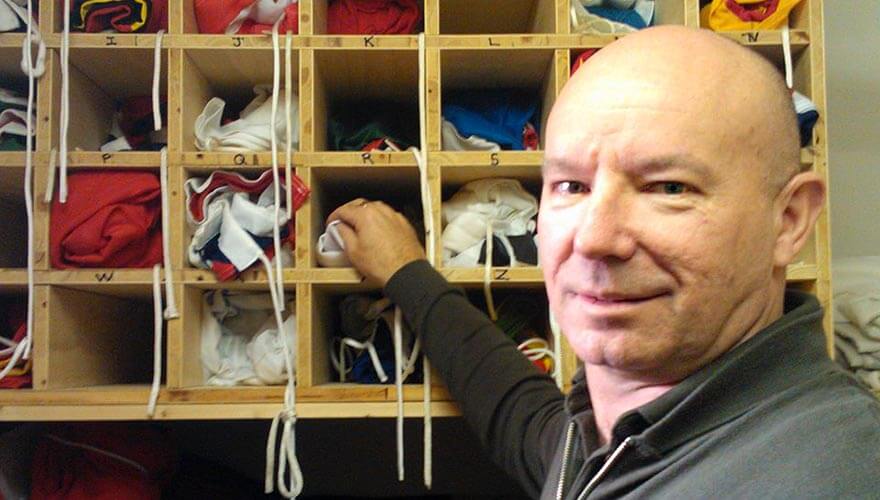 Whatever about the flags, you can never let your guard down. When Ireland was hosting the EU presidency, we had the EU flag up along the 140 big flag poles. “And we got a phone call about 3 days later to tell us that we had three flags upside down. I was surprised but then I realised the star was a five-pronged star and there should be only one part of it sticking up. So someone was very sharp,” Ed says. “I copped it when the email came in and I went down and changed it. That was a very observant individual,” he added.

During Pride week the quays are bedecked with the rainbow flag of the LGBT community. This was probably the last thing in mind when the flag posts first went up first. “They went in in the 1932 to celebrate the Eucharistic Congress,” Ed says. The poles were obviously of a sturdy design. “They are still being used today. They are a very simple design and they have never given us trouble.” Sure the odd flag has been lost. “We have lost some flags where the rope might get frayed and in a bad wind it might come down but we have not lost flagpoles”, he says.

It’s generally the Dublin ones that go. And you’ll see them flying outside a flat. I mean they’re huge and you can’t buy them

The Ulster flag also tends to get robbed, Ed says, attributing the theft to ignorance. “The Ulster flag is our flag; it represents the province of Ulster. But the Unionist flag equally has the red hand on it,” he says. The Ulster one has gone missing three or four times in the last five years. “We put three or four cable ties on them now to try and stop the guys with too much booze and too little history.” The other flags that go missing are the GAA team flags. “It’s generally the Dublin ones that go. And you’ll see them flying outside a flat. I mean they’re huge and you can’t buy them,” he says. 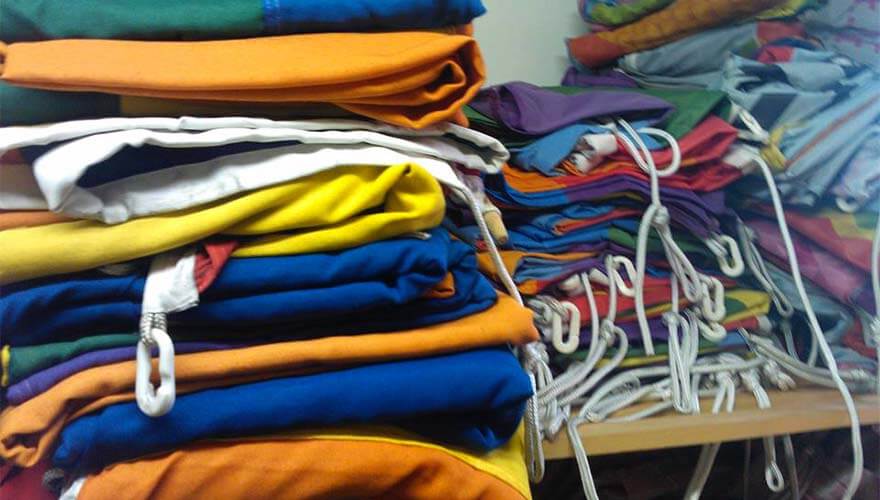 It seems Ed has vexillology in his blood. As a kid growing up the family had a flagpole in the garden and his father flew the tricolour. “You see the Stars and Stripes everywhere in America and the French can be very patriotic. But there was a reluctance here to associate oneself with the Irish flag ‘cos of the troubles in the north,” he says. “I think all the neighbours thought we were mad republicans, even IRA supporters, but we were not, not at all, it was just my father was very proud of the flag,” he adds.

Ed grants some credence to the thesis that Italia 90 reclaimed the flag from the IRA and made it a symbol for everyone. “As the troubles have been settled I think we have taken even more ownership of it,” he says. That and the fact that it is now being flown more over city buildings now that it is floodlit at night.

One last question: what happens when some small, unusual country is paying a visit? Does Ed have flags in stock for every country? Ed says it’s very important that the exact colours are used. Apparently, there were a few mishaps on that front when the work was given to a cheaper company. “So we use a company off Camden Street called Prospect Design. They are very good. They do all the national flags for the government, for the OPW and for ourselves. So you know you are getting the right flag” he says.

Ed says he thoroughly enjoys the nerdy aspect of the job and is a proud member of the Vexillologist Association of Ireland.

The newest of the Liffey bridges is the Rosie Hackett Bridge of 2014. A bridge of its time, built of stainless steel and concrete, it caters for the living city, providing a crossing for the pedestrian and for public transport. In the name alone – it is the only bridge within the city limits named for a woman – there is the kernel of the history of the modern state and the tale of an heroic woman. The oldest bridge straddles the river in the western suburb of Chapelizod, a four arch stone bridge with royal connections of old and a more modern, Joycean inspired moniker: the Anna Livia Bridge dates to 1753.

Dubliners… Think you’ve seen it all? Cast your eyes skyward. As charming as Dublin’s skyline is, it’s never exactly been noted for its towering buildings. Quite the opposite, in fact, with the highest towers in Dublin reaching an average of 60 metres. Although this may be changing. ‘The Exo’, a 73 metre high structure in Dublin’s Docklands, was recently built and permission has been granted for other high rise developments. For now though, Dublin is low-rise in nature. And it is perhaps because of this that neither inhabitants nor visitors t