Just to be clear, the position of Historian in residence doesn’t come with an actual residence.

‘More’s the pity’, says Cathy Scuffil, who is the Historian in Residence for that LA-sounding bit of Dublin known as ‘South Central’. This is one of the six sectors of Dublin – each based on electoral districts – that now have their own historian.

Tara Doyle of Dublin City Council runs the programme, which builds on the success of the 1916 commemorations and a surge in interest in history in general. She sums it up very simply: ‘it’s all about letting historians talk to people about history’. This doesn’t mean that it’s simple to do, however.  As Tara puts it, her historians ‘know the craft of history. But they also know how to communicate it.’

I like to get down into who the humans were in the story, because that’s what local history is

To find out how they do that, Dublin.ie witnessed Cathy working her magic in a classroom full of sixth class pupils at a city centre school. The children’s joy at being freed from actual school work quickly turned into rapt attention as she introduced them to the realities of life in the mediaeval abbey of St Thomas the Martyr in the Liberties. Tailoring your material for the audience proved to be crucial. Key-words included ‘gallows’, ‘brewery’ and ‘toys’; the hobby horse was the Playstation of the 1500s, apparently. By the time she had finished her presentation, we all knew a lot more about religious institutions in the olden days than we ever thought we’d be bothered to.

‘I like social history’, says Cathy, ‘so I like to turn back and look at the people. I like to get down into who the humans were in the story, because that’s what local history is – it’s about people, places and things, and if you can get all three into your story you’re doing well.’ 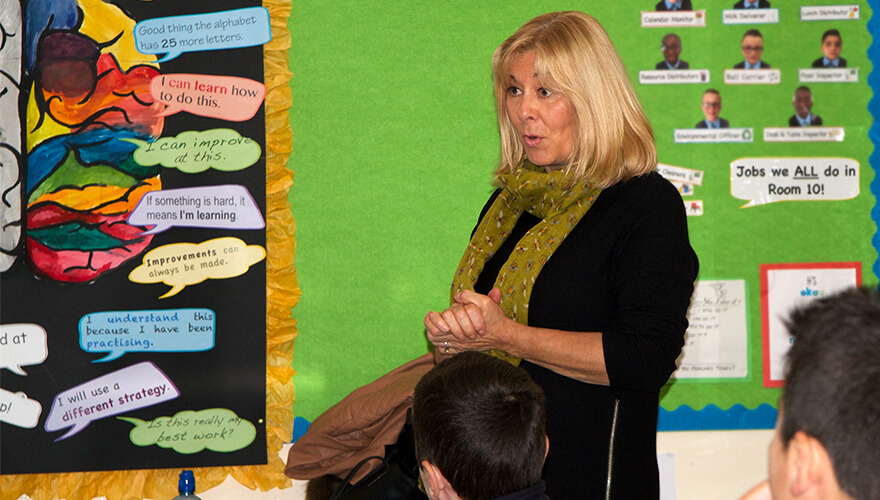 According to Henry Ford, of course, history is bunk. But Cathy is eloquent on the subject of its value: ‘I think when you look at your history and when you understand that you are part of a continuity of things, that changes everything. It certainly addresses things like anti-social behaviour. Because you will not damage something that you treasure. So if you start getting an understanding of your history and an understanding that you’re just a moment in time in that history, your perspective will be changed’.

Amongst the weapons in her perspective-changing armoury are all sorts of concrete examples. And a brick one too. This came in handy when she met the residents of the Ceannt Fort estate in Mount Brown, Dublin 8, recently. The houses there are built of ‘County Dublin granite and Dolphin’s Barn brick’, she says, ‘and that was done deliberately to keep the men in the quarries and the men in the brickworks at work’. And, yes she’d brought a brick with her in her bag, ready to demonstrate exactly what she was talking about.

understanding that you’re just a moment in time in that history, your perspective will be changed

Since the programme began in May 2017, Cathy’s talked to Men’s Sheds, residents associations, libraries, schools and and all manner of other groups, including an older people’s home. (Two of her fellow HIRs, Donal Fallon and Darragh Gannon, have also talked to the inmates at Mountjoy prison). At the Men’s Sheds, her audiences love to hear about Dublin pub lore; at the older people‘s home, her talk on place names went down particularly well.

Dublin.ie asks for an excerpt from this and she obliges as follows – ‘well, if I said to you that we have a ring of mountains around Dublin, tapering to gentle green hills and a sandy ridge surrounding a crooked glen in which a winding stream rises, would you think there might be any of that around?’ 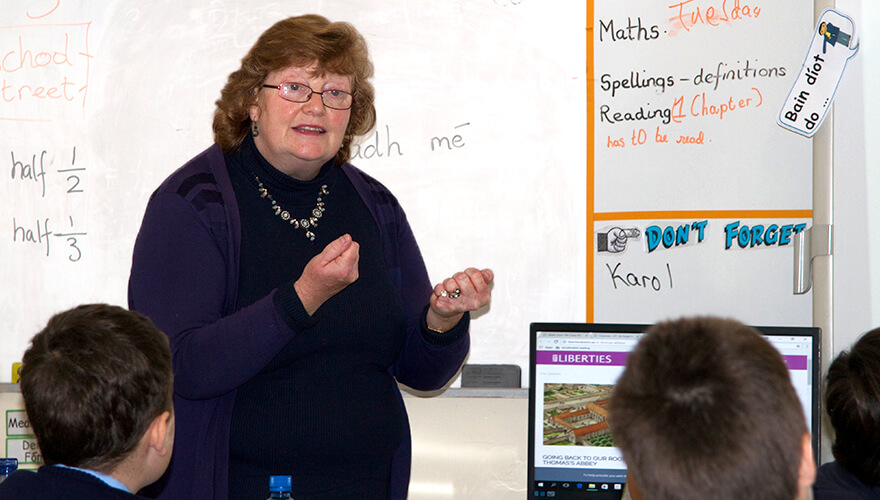 ‘Uhhm…’ says Dublin.ie. But Cathy has all the answers, and here they come. ‘Well, you’ve heard of Greenhills, right? What about sandy ridge? Or Droimneach in Irish? That’s right, Drimnagh! And crooked glen? Or Croim ghlinn: Crumlin! Winding water? Camaigh uisce?  Kimmage! Now I’ve brought you back to the meadows and the fields, to places that you know, and your Irish isn’t too bad either!’.

Cathy is on a career break after 35 years with the health service. But history runs in her blood. As a child, she walked from Dolphin’s Barn to Blackpitts every day with her father. From him, she learned all the place names and their meanings in English and Irish. He encouraged her to be fluent in the language of street signs, she says.

So maybe the Greenhills-to-Kimmage exegesis is partly down to him. Now she’s studying for a PhD – something she says her mother was very keen for her to do. And she’s grateful too for all the support that Tara and the DCC’s community officers have given her in her role.

But so far as Dublin.ie can see, a lot of Cathy’s success as a Historian in residence is down to the empathy she has with the people she meets – and for the people she talks about, even the ones she’s never met who might have been dead for hundreds of years.  Oh, and then there’s the guy who painted the street sign for Ship Street, for whom she also has a certain sympathy.  ‘It’s a fairly short in English’, she says. But ‘ship’ actually comes from ‘sheep’, not ‘ship’. So in Irish it’s ‘Sráid na gCaorach Mhór’ – it’s one of the longest street signs we have in Dublin! Somebody had to paint that, poor fellow!’

Dublin’s art scene is blossoming. A new wing has opened up in the National Gallery, IMMA continues to attract international work, the walls of the city are awash with commissioned street art but with a competitive housing market and rising rents, how is the city looking after its artists? Each year, Dublin City Council puts out a call for artists to live in the four subsidised residential spaces offered for periods of three months to a year; two cottages in leafy tranquil Albert College Park in Glasnevin, a Temple Bar apartment and St Patrick’s Lodge beside the

The story of the plaque on George Bernard Shaw’s birth house on Synge Street offers a keen insight into Shaw’s relationship with his native country. The proposed wording, “He gave his services to his country, unlimited, unstinted and without price” was rejected by Shaw as “a blazing lie.” The plaque now simply refers to him as “author of many plays”. Shaw’s small Synge Street home, where he lived an impoverished youth, is perhaps a symbol of our uncertainty about Shaw. Once a museum, it now stands empty, its fate uncertain – but often the people of a city create their own monuments. Last December, the street artist Fink was working on a mural outsid