One of Rathmines’ smallest buildings happens to be one of the most distinctive, for it houses a Dublin art collective, MART.

The old fire-station, with a classic engine-red door facing the main street, was built in 1847 soon after Rathmines became an independent “township”. Like the magnificent Rathmines Town Hall, the station was a symbol of township independence and civic pride. The fire crew based here played a big role battling the inferno, which blazed around Sackville Street during the 1916 Rising, winning medals in the process. Locally they fought the fire that destroyed St Mary’s Refuge of Sinners church, back in January 1920. They couldn’t save the old dome however, its dramatic, melting collapse led to the much bigger, green replacement “Russian” dome we know today.

Following Independence, the townships, like Rathmines, were killed off. The station was still used up until the 1980s but by the mid-90s it lay neglected and empty. In 2012 however the fire station got, if not exactly a reprieve, certainly a new lease of life from an unlikely source.

Artists Ciara Scanlan and Matthew Nevin are both visual arts practitioners and curators. They are also the co-founders and directors of MART, a non-profit artists’ collective formed in 2007. Back then as Scanlon explains they initially “set up exhibitions in empty retail units throughout Galway”. Within a few years they’d expanded to shows “in the UK, Europe and US”. MART were also on their way to turning into the largest providers of artists studios in Dublin, although low on main street visibility. The fire station would change that. 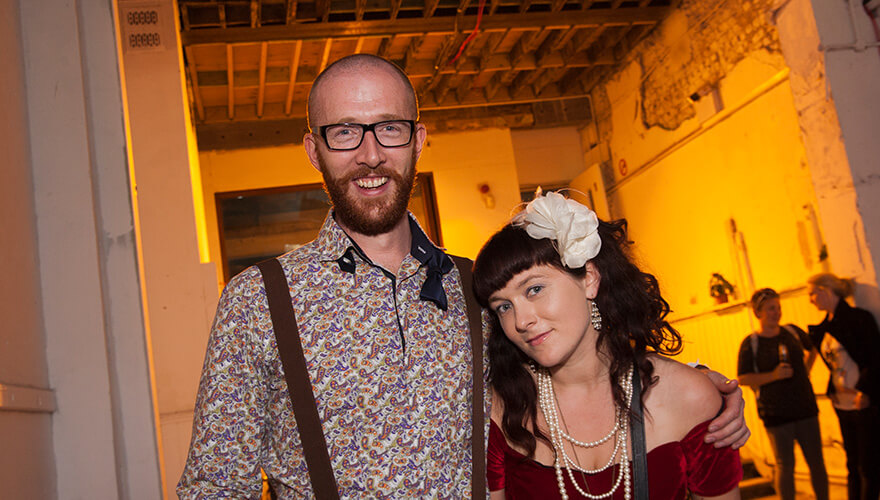 Scanlan and Nevin approached Dublin City Council and persuaded them to let them restore the fire station as a gallery and as artists’ studios. That proposal turned out to be the easy part. The building Scanlon remembers was in a very bad way, “no windows, (no) doors, broken floors and beams. The roof had been thankfully repaired years earlier by DCC, so was structurally sound”. But, “pigeons had made themselves very much at home!” Following two years of hard manual work, the old station and the house behind finally reopened in 2014. It has been housing artists and showcasing exhibitions ever since.

MART has grown to lease 9 building in Dublin City for art studios, with other studios including spaces in Portobello, Crumlin, Kilmainham and Blackpitts. Scanlon notes, the fire station functions “as our gallery and home base”. The station gives them street front presence as well, in an eye-catching building full of heritage and history.

MART provide the Holy Grail: affordable studios, along with a community

A previous exhibition at the Fire Station  ‘Freedom of Movement’; which finished in September 2017, was an intriguing look at a collection of films by Berlin-based artists Nina Fischer & Maroan el Sani. The Core Project, at the Rua Red Gallery in Tallaght, is a show by MART’s co-director Matthew Nevin. Started back in 2010, the artist sought to make a connection with one resident from every sovereign state in the world. He asked them to record a spontaneous, videoed response to the question: “What is going to happen Next?” The respondents had to open their envelope in front of the camera, and so had no time to prepare their answers. Where exactly they opened it; how they reacted when they read the question, and what they then chose to share, was all entirely up to them.

Nevin has received around 144 video responses to date. This diverse treasure trove of audio-visual information is worth a visit. The project in its entirety will have two strands: video installation at Rua Red Gallery; and a feature-length movie called What Is Going To Happen Next?.

The scene inside MART’s artist studios

Returning to MART, it’s clear they deserve huge credit for re-purposing the fire station. It’s a bonus their tenancy not only maintains a beautiful old building, but keeps it open to the public too. From the artists’ point of view, MART provide the Holy Grail: affordable studios, along with a community and even a de facto support network, for people who often face what is after all a difficult, occasionally very isolating profession. Clearly MART enhances the cultural vibrancy of Rathmines. Arguably it even “internationalises” the area, as overseas artists exhibiting in MART venues make a pit stop among a network of creativity stretching from Norway to Greece to North America, Latvia and France.

However the old fire station’s long term future remains uncertain. As Scanlon says they would dearly like to get a permanent home, “move away from leases” admitting that that “could take a few more years”. She quotes the model of WASP studios in Scotland, well supported by government there. By contrast, Scanlon says the future of MART at the fire station “is not secure at all. They hope to have their tenure renewed, “but there’s no guarantee. We would love to negotiate a long term lease” and be valued “as an important provider of an art centre in the area”.

The building missed receiving protected status in 2015 due to a Council clerical error and there are conflicting opinions on how to proceed. Some wish to resolve the error and provide protected status whilst others point to the need for future development on lands behind the fire station (part of the Draft Local Action Plan).

In any case, all this is a chapter of Rathmines history yet to be written. For now enjoy the fire station, its events and exhibitions. It’s a cultural asset to the area, and a testament to the determination and conviction of the artists who made it.

MART is based at 190A Rathmines Road Lower, Dublin 6. Opening hours Tues-Sat: 1-6pm

Arran Henderson
Arran Henderson writes on history and visual culture as well as art, architecture and history. He leads walking tours around Dublin, including tours of central areas, Rathmines, Blackpitts/Newmarket, and Grangegorman.

If you live in Dublin, it’s almost impossible not to be aware of the shortage of affordable housing. If you haven’t joined the back of a long queue to view a property in recent years, chances are you know a lot of people that have. And for many the consequences can be far worse; about 140 people sleep rough every night, there are some 3,000 homeless who are dependent on hotels and B&Bs, and a further 100,000 are on social housing waiting lists. It’s something that’s garnered a lot of media & governmental attention, and often the solutions proffered are quite grandiose; build up and build quickly. As a nation, we tend to have a penchant for the new when it comes to housing. While that may be a part of the solution, it’s certainly not the only approach. In every corner of this city, there are spaces going to waste.

I didn’t really like school that much. I’m dyslexic and I couldn’t handle it. I hated even reading at the time. I left school when I was 16 and got into a trade in air conditioning and refrigeration. I bought my first house when I was 19, my second when I was 22, my third when I was about 24. I rented out the houses and was involved in different businesses, investing money as well as working in refrigeration. In my early 20s, I had nice cars, everything was going great, I travelled all over the world and had a ball! I realised I liked the hustle and bustle behind the camera. It was being creative but it was still business, and I like dealing with people

4pm. O’Connell St. And it sounds like a Beckett play. Doom and gloom. Sitting and waiting. Waiting. Waiting for customers. “I suppose a fella gets to sit and read the paper all day. That’s what it’s come to,” says Austin Cregan, the third generation of his family to sell papers and magazines on the capital’s main street. Sitting in his kiosk near the Abbey St corner, Austin reaches behind him and takes out a laminated 2008 article from the Irish Times. It’s all about him and his father’s and grandfather’s life selling newspapers from the kiosk. “Read that,” he says to Dublin.ie. “Everything is in that. Excep