4pm. O’Connell St. And it sounds like a Beckett play.

Doom and gloom.
Sitting and waiting.
Waiting.
Waiting for customers.
“I suppose a fella gets to sit and read the paper all day. That’s what it’s come to,” says Austin Cregan, the third generation of his family to sell papers and magazines on the capital’s main street.

Sitting in his kiosk near the Abbey St corner, Austin reaches behind him and takes out a laminated 2008 article from the Irish Times.
It’s all about him and his father’s and grandfather’s life selling newspapers from the kiosk.
“Read that,” he says to Dublin.ie.
“Everything is in that. Except it’s worse. A whole lot worse.”
So what about your son, will we be seeing him here manning the kiosk?
“Are you joking? He wouldn’t touch it with a million mile pole, never to mind a barge pole.
That bad?
“Worse.”
“It’s bollixed.”
“Everything’s bollixed.”
It all sounds a bit depressing.
“Being depressed is part of life,” Austin laments. 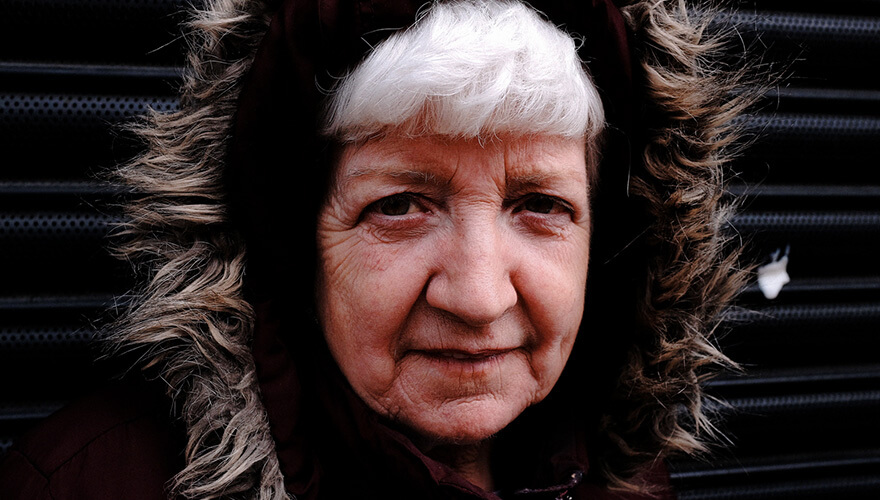 It wasn’t always this way.
The real halcyon days were way before digital.
“The 50s to the mid 70s, they were the good times for newspapers.”
Then there was a gradual decline, leading up to the current annihilation.
But during those 25 years newspapers were an essential part of living.
“Everybody bought a paper whether they needed one or not. Everybody bought a Press or a Herald, a morning paper and an evening paper.”

Austin throws out a challenge to guess how many Independents he has sold from early morning to late afternoon.
The response needs to be divided by 10.
“Five,” he says.
Then repeats it just in case there is any doubt.
“Five.”
And Heralds?
“Eh…sixteen.”
A couple more were sold as we spoke.
But you wouldn’t be dining-out on the proceeds.

Austin sits surrounded by a riot of magazine colour.
So what about the magazines, from celebrity love lives to History Ireland?
“You sell one or two but it’s bollixed.”
“Bollixed.”
“Most of it is just window dressing. You’re dressing it all up to sell minuscule amounts,” he says.

You are looking at a huge cultural change. If you are brought up without papers, you don’t see the difference. The kids nowadays they just don’t see it

A good way to assess the demise of the business is to look at how the space given over to papers and magazines in the Spars and Centras has shrunk over the past decade.
Austin does a 70 hour, six day week and is just scraping by.
He says if he got a job offer he would throw the whole show in.
“But the way the country has gone there is only yellow pack jobs and zero hour contracts.”
Looking back on the state of print, he thinks the papers screwed up at the start of the digital revolution by going online for free.
“All the papers chickened out when the technology came in. They should have banded together and said we are not going to go online. We’ll stay as we are,” he says adding that “Between online and then the freebie newspapers, we are truly bollixed.”
We are getting a clear picture here.
‘Bollixed.’

Proving this is the fact there are no new customers.
All his customers are regulars and when they die or retire, they are not being replaced.
“And the kids these days don’t even know what they are missing,” he says.
“You are looking at a huge cultural change. If you are brought up without papers, you don’t see the difference. The kids nowadays they just don’t see it. And If you don’t see it, you don’t know what you are missing,” he says.
“Sure it’s like a horse and cart. Nobody is going to buy a horse and cart anymore.”
If you can’t sell papers in a busy spot like this, it seems you can’t sell them anywhere.
“Yeah there are loads of people passing. But it’s worth fuck-all because none of them buy anything.” 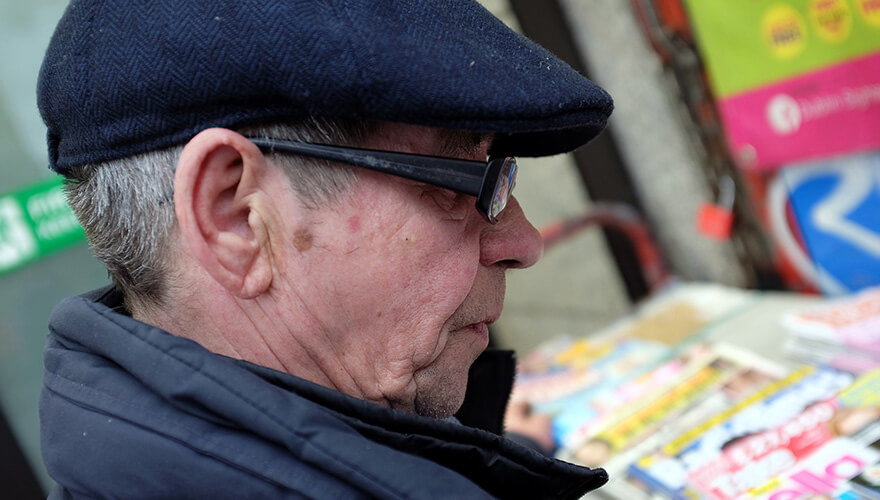 Francis Mumbley at his kiosk near Penny’s

Austin locks up his stall at night.
“But it’s not worth robbing,” he says.
Anything newsworthy ever happen to him during the day?
“No I was never robbed, thank God,” he says, quickly adding: “Annoyed, pestered, putting up with arseholes all that kind of stuff. Fellows in the morning coming home from nightclubs and they are still pissed and they are looking to take the piss.”
The warning sign is when you see fellows with no coats on early in the morning.
“That’s the sign.”

Strolling around the corner onto Talbot St, we meet another newspaper seller, “Mary”, who does not want to give her name or be photographed.
“I have nothing to hide, I just don’t like it. Go talk to Austin,” she says.
We just did.
Mary confirms what Austin says.
She comes out just for the afternoon and says she is lucky to make 6 or 7 Euro.
So it’s bollixed then?

Yes in business terms but Mary says she enjoys the chat and meeting her dwindling handful of regulars.
Then over outside Penney’s, one look from Francis Mumbley told us all we needed to know.
Bollixed.

From one chair to three shops – the success of Cut & Sew Barbershop culture is on the rise in Dublin. Barbershops are becoming cultural hotspots. Places you can go not only for a haircut, but for music, design or even a whiskey. By taking the best of New York’s barbershops and adding a touch of creativity and an Irish welcome, Sean Bryan of Cut & Sew has built his business from one chair in the basement of a record shop to three stores in Dublin’s city centre. And he isn’t finished yet. Dublin.ie caught up with Sean to see what’s behind his success. Sean left school after

Pushbike couriers. You see them milling about on Dublin’s city streets every day. And if you don’t know one, or have never been one, they can be the subject of some curiosity. Why would you want to do that for a living? Is it a real job? Could you live on the money they make? Is it dangerous? Are they crazy? Well, seeing as I used to be one, I can answer some of these questions. But given that was back in the mid to late nineties, I caught up with one of them briefly, one who worked the streets at the time I did, and just so happens to be still out there. The big theme of our chat revolved around how much the city and the job has changed. I always remember couri