I didn’t really like school that much. I’m dyslexic and I couldn’t handle it. I hated even reading at the time.

I left school when I was 16 and got into a trade in air conditioning and refrigeration. I bought my first house when I was 19, my second when I was 22, my third when I was about 24. I rented out the houses and was involved in different businesses, investing money as well as working in refrigeration. In my early 20s, I had nice cars, everything was going great, I travelled all over the world and had a ball!

I realised I liked the hustle and bustle behind the camera. It was being creative but it was still business, and I like dealing with people

In 2007, I bought a house just before the crash. Over a period of about 3 to 5 years, I saw the decline of the businesses. I moved to Dublin and ended up losing my job. I lost the houses one by one, and then the businesses started closing. The recession crashed everything. I lost my job and didn’t know what to do with myself. I had money all the time and I didn’t know the value of it, ever. Looking back, the wipe out from the recession is the best thing that ever happened to me. It took me out of a place where I had become very complacent. Luckily I didn’t have to go bankrupt, and was able to walk away from everything. 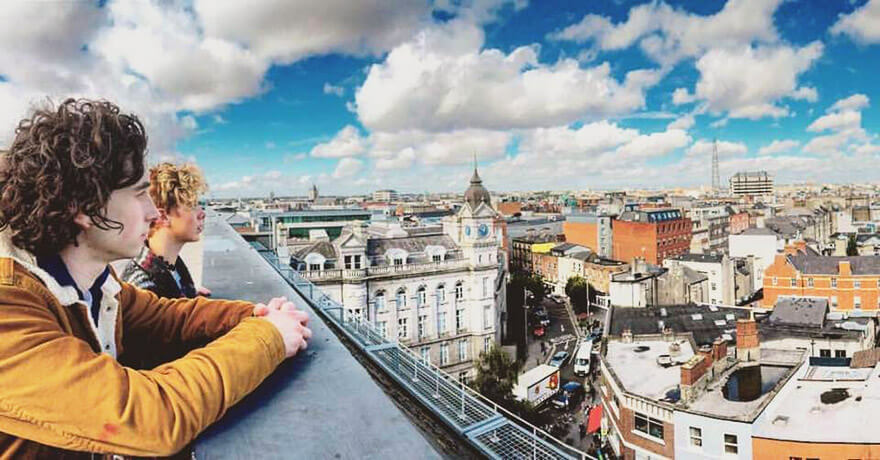 I got into acting and was cast in a movie. On set, I realised I liked the hustle and bustle behind the camera. It was being creative but it was still business, and I like dealing with people. I got cast in a feature film and it was low budget. The producer and director parted ways and nothing was happening. I wanted the movie to get finished because I was an actor and I wanted to get out there. I got a book on what a producer does. I read it and finished producing the movie myself. The movie went into distribution and that was the first movie that I produced.

At that time I was on the dole and had no money whatsoever. I worked as an intern for free in a production company, producing about three movies with them but they weren’t in a position to take me on. It’s a hard industry for people to take on full time. I see that much more now than I did a few years ago.

Unemployment was out of my comfort zone compared to where I had been previously. I ended up going to the unemployment centre for a week long positivity course. On the last day, Shane, this guy from the Inner City Enterprise (ICE) came in. He talked about how they help people get businesses started. At the end of it, I told him I wanted to be a producer and start my own production company. He didn’t look at me like I had ten heads.

It’s just about asking for help. That is the first thing. Just say ‘I want a bit of help’ or ‘can you help me out here?’

I lived in Thomas Street with a friend of mine and the building is called Bankhouse. Every day she was like, ‘You have to come up with a name’. I saw the plaque on the house and I really loved it. A lot of people said to me, don’t call it that, because of the word ‘bank’. I ended up doing it, I liked the name and it served me well. In August 2014, I started Bankhouse Productions. Fast forward two years, and I won ‘Most Innovative Business’, produced a nationwide cinema release, South, which won ‘Best Feature’ in two festivals. It was directed by Gerard Walsh and has now been to festivals all over the world.

Following Bankhouse’s success, it was the first time I ever spoke out publicly about being at the bottom of the barrel, and losing everything. A lot of my friends didn’t even know. I wasn’t ashamed, I just couldn’t deal with it. I thought it was a brilliant opportunity to say, look we’ve won this award and we’ve done well. It was time to be, just honest.

In terms of what’s next, we are doing a documentary on Irish Street Leagues, The Homeless World Cup. Irish Street Leagues uses sport to transform and help the lives of people who have encountered difficulties and hard times. People who have experienced homelessness, drug and alcohol dependent individuals in rehabilitation, ex-offenders etc. It brings people together and gives them hope. They are going to represent their country, which is a massive deal. We’re in the middle of filming a documentary on them now. We are going to be following them to The Homeless World Cup in Oslo. It’s brilliant. This is the first year an Irish female team has been accepted too. Colin Farrell is a patron and the Irish ambassador of Irish Street Leagues. He’s in the documentary. We’ve just filmed with him in the States, he’s lovely guy.

When I had nothing and was on the dole working for free, I realised, money wasn’t the reason behind it. Success is not driven by money. Keep doing what you love to do.

I am also working on a project called The Evolution of Success. Two years ago I was on the dole, if I can help someone in that situation, from literally being someone who is on the dole to now run their own company, I am going to do it. We are making a documentary and have some amazing people in it. There is a lot of help out there like the Local Enterprise Office and Inner City Enterprise. It’s just about asking for help. That is the first thing. Just say ‘I want a bit of help’ or ‘can you help me out here?’. Every time I asked for help, somebody said yes. You’ll find that every time you ask for help, somebody will say yes. Asking is the hard part.

The biggest lesson I learned from my 20s, I took things because it was going to be for money. When I had nothing and was on the dole working for free, I realised, money wasn’t the reason behind it. Success is not driven by money. Keep doing what you love to do.

Co-working that went from pop-up to permanent The Fumbally Exchange began as part of the pop-up space revolution that took Dublin by storm a few years ago. Its name came from its first temporary location, which was on Fumbally Lane – right next to the well-known Fumbally Café. Today, however, the Fumbally Exchange has a permanent home in the freshly refurbished Argus House in the popular Blackpitts area of Dublin 8. It has even expanded to a second location in Waterford. So what exactly is the Fumbally Exchange?