Unique and personal perspectives on life in The Pale. This week: Trevor Colgan

I remember seeing the DART for the first time. I was 7 years old. It was 1984. I thought it was some impossible machine out of a science fiction movie. At that time, I lived with my family in the remote wilds of Blanchardstown, West Dublin, and as such, the DART wasn’t likely to be a part of my daily life. But the very next year, we moved to Donaghmede. Howth Junction Station lay just around the corner from our house. And, from that moment on, if we were availing of public transport, we were hopping on the DART.

Many years later, when I first began to harbour dreams of being a writer, I spent countless hours in my bedroom, pumping out pretentious and impenetrable prose, cod-profound poetry and badly structured Tarantino-esque screenplays on a mysterious (some may say mythical) device known to historians as a typewriter. When I think back to those salad teenage years of constant creativity, I fondly remember the role my bedroom played in my development as a writer. But there was one other place that served as the real theatre to my dreams.

How I happened upon the DART as my mobile writing room? I can’t quite remember. But of all the places I have written during my career, the DART – by far – yielded the best results. My DART routine came about with the kind of fleeting, organic ease that all artists dream and pray for. I would purchase an all-day ticket and board at Howth Junction just after ten am (the same time the rush hour cram was dissipating and most normal commuters were already at work) and ride that rectangular green puppy out to Bray. Along the way, I would often at times be the sole passenger on my carriage. The scenery along the way was always stimulating, whatever the weather, as was the occasional random conversation I was able to eavesdrop in on between some fellow passengers. But the real gift I received was the silence.

Silence is an extremely underrated commodity for writers. On board the DART, from ten to three every weekday, I enjoyed it in abundance. Five unbroken hours of being left alone to write. This rather unconventional workspace allowed me to complete the heavy lifting on three young adult novels and my first TV drama series. Those novels were duly published and nominated for awards. The TV series was picked up by RTE and Granada International, and broadcast in several countries around the world. I owe a huge amount of this success to my days spent scribbling frantically on board the DART.

In the years since, I have retreated to the stationary confines of my home as a workspace. I also, occasionally, frequent writing rooms in RTE and the BBC. But still, I have to wonder, is there a great Irish novel or an Oscar-winning screenplay still locked up inside me, just yearning to break free? Is the secret to unlocking this golden work an all-day ticket to ride that green block of motion that prowls gracefully along the Dublin coastline? Maybe I should fish out my dog-eared notepad, grab a couple of leaky pens, and take a long ride from Howth Junction, just for old time’s sake… Just to see. 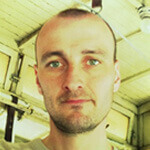 Trevor J Colgan is a novelist, screenwriter and TV producer from Donaghmede, North Dublin. Outside of work, his interests are his son Jack, Liverpool Football Club, and music made before the year 1989... The year rock attained unsurpassable perfection. Roses!!!

After living in Jersey City for the first decade of my life, we moved to my mother's hometown, Dublin. My parents had divorced and the neighbourhood we were living in was starting to deteriorate rapidly. My father stayed on in his native city and we hopped on a plane to Ireland. It took a long time for me to find my peace with this place. The food here in the 80's was brutal and I quickly realised why. There was nobody here of any skin colour that wasn't lily white and freckled. Consequently, no proper New Jersey pizzas, bagels and barbecued chicken. These had been my dietary staples. And although I was well used to tough city kids, on my own I was no match for the lads from Charlemount street and Swan Grove, who on my first day of school beat me up because I asked the teacher if I could please use the "bathroom."